Cost-Effectiveness of Multifactorial Interventions in Preventing Falls among Elderly Population: A Systematic Review

Nowadays, all developed and underdeveloped countries are experiencing aging population worldly [1]. The world’s elderly population is estimated to surpass 1.9 billion by 2050 [2, 3]. Elderly population of the United States increased 15% above 65 years and 29.6% above 85 years old between 2000-2010 [4-7].

As the age of population increases, the health problems also increases [8]. In older ages, individuals are susceptible to more injuries, which leads to higher demand  for healthcare services [9]. The elderly population compared with other age groups suffer worse conditions due to the physical conditions when traumatic injuries occur [10-15]. Moreover, the social costs such as loss of life are higher among this population due to trauma [16].

Currently, trauma is the 5th leading cause of death among elderly with fall as the most common cause of trauma-related death [17, 18]. The more rates fall and its injuries are higher than the health care costs [19-21]. About One-third of people over 65 years and 50% of people over 85 years experiencing to fall each year [22]. The falls probability  is estimated about 35% to 40% over a year in the elderly, which half of them can be more than a fall per person [23]. Falls and injuries are a widespread problem among the elderly population [24] with immediate and long-term consequences. According to studies, elderly fall accounts for About 80% of accident hospital admissions  [25, 26] and 11% of the elderly death [27]. A study in Australia estimated the rate of falls in hospitalization of elderly people that is 30,000 in a year with 1% total death. The researchers showed high burden of diseases on the country’s healthcare system [28, 29]. “Loss of balance” and “loss of functional mobility” are two main reasons of fall in elderly population [30]. The other reasons of falls in the elderly are including of low ambient light, unsafe stairs, slippery rugs, inappropriate shoes, concurrent use of multiple drugs, psychedelic drugs use, musculoskeletal weakness, balance and gait disorder, visual impairment, nutritional disorder such as calcium and vitamin D deficiency and cardiovascular disease [31-33].

It is estimated that around 7% (€ 1.6 billion) of the total annual spending in National Health Systems (NHS) in UK was spent to treat traumatic injuries in 2008 by given the high cost of treating trauma injuries [34]. The United States has also allocated more than $ 35 billion of health care costs for the elderly between 2008 and 2013 [6].

Falls are influenced by several facilitating and exacerbating factors which using one intervention alone cannot prevent the elderly falls [35]. Multifaceted strategies can be very successful, such as training in how to use the toilet, providing safe furniture, securing the home environment, recommendations, and behavioral training which aimed to control and prevent elderly falls due to several factors [36, 37]. Interventions may be effective to reduce falls in the elderly, but if they have extremely high costs, they may not be a viable option. Therefore, policymakers and decision-makers should evaluate both an effectiveness and cost of interventions. Because of the importance of this issue, multifactorial intervention studies can guide policymakers and decision-makers to prioritize and use a combination of these interventions to prevent falls in the elderly [38, 39]. It is necessary to have accurate, clear, and coherent information on the economic costs and cost-effectiveness of these interventions. Therefore, the present study purposes is to review the cost-effectiveness studies of multifactorial interventions and to prevent falls in the elderly through systematic review.

The present study is a systematic review conducted in accordance with the Preferred Reporting Items for Systematic Reviews and Meta-Analyses (PRISMA) statement [40, 41].

All observational studies such as descriptive-analytical, cross-sectional, case-control and cohort were included in the study. Papers presented at conferences and congresses were excluded. Also, studies that did not have adequate information were also excluded via an agreement between the authors.

Initially, the titles of founded studies were reviewed and articles that were inconsistent with the study objectives were excluded. Subsequently, abstracts and full texts of the papers were studied and studies that did not meet the inclusion criteria or did not report adequate and appropriate information were identified and excluded. Data were extracted according to the researcher-made data extraction form and entered into the designed form. Endnote X8 was used to organize, study titles and abstracts as well as identify duplicates. The entire review process was conducted by two authors, and disputes were referred to a third person.

All included studies were evaluated by two evaluators through the Dramund Economic Studies Quality Assessment Checklist [42]. The Drummond Economic Studies Quality Assessment Checklist has 12 questions. The answers to the checklist’s questions were “Yes”, “No” and “Can’t tell”. “Yes” score 1 and the “No” and “Can’t tell” scored zero. Based on this tool, scores ranged from 1 to 4 rated as poor, between 5 to 8 moderate and 9 to 12 rated as high quality. After the two evaluators review, poor quality papers were excluded and the differences between the two evaluators were referred to as the third evaluator.

Content analysis was used to analyze the data, which is a method for identifying, analyzing, and reporting patterns within the text and is widely used in qualitative data analysis [43, 44]. Data were coded by two researchers. The steps for analyzing and coding the data were included familiarity with the text, identifying and extracting primary codes (identifying and extracting more data related to primary codes), identifying themes (inserting extracted primary codes into related themes), reviewing and completing identified themes, naming and defining themes, ensuring the reliability of the extracted codes and themes (agreeing between the two coders through discussion and resolving disputes). The third researcher was referred for consensus in case of disagreement between the two researchers.

Fig. 1. Flow diagram of the searches and inclusion process.

The results of 19 articles found that 16 studies were conducted in 9 countries (USA, Singapore, Australia, Canada, England, the Netherlands, Germany, Finland, and New Zealand) and 3 are multinational studies. The results also showed that 18 out of 19 studies were in high-income countries and only one in Singapore, which is a middle-income country.

Study Results by Place of Studies

The results showed that 16 studies were done at home, two were at the nursing home and one was a Model represent population level.

In terms of studies’ view, 47% of studies was from a social perspective, 29% from the Health System perspective, and finally 24% from the payer perspective, respectively, which evaluated the cost-effectiveness of multifactorial interventions to prevent falls in the elderly.

Study Results by Type of Interventions 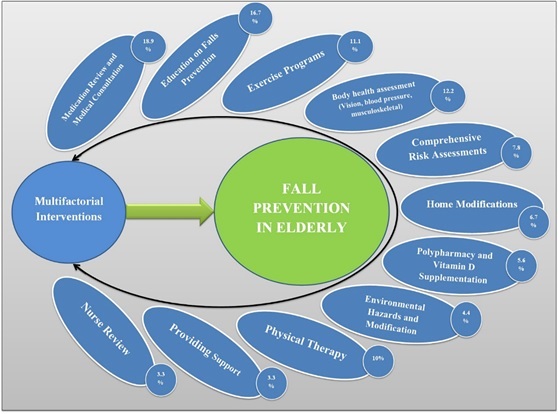 Fig. 2. The number of multifactorial interventions to prevent falls in the elderly.

From 19 studies in 11 studies, Randomized Control Trial (RCT) with 3320 samples was used to measure effectiveness, and in 3 studies, systematic review of RCT was used. Finally, of the remaining 5 studies, 4 were modeling, and one was RCT simulation, which a total sample size of 11.4 million approximately had been examined. The results showed that 11 studies used secondary data and the rest used primary data.

Of the 19 studies, only 3 studies used a 5% discount rate and one study used a 3% discount rate to calculate the cost-effectiveness of multifactorial interventions [46, 51, 52, 54, 56]. No studies reported information on the life-years gained.

Study Results by Cost Per QALY Reported in Included Studies

Study Results by the Overall Results Obtained from Multifactorial Interventions

Of the 456 studies, 19 were finally included in the study. Most studies (18 studies) were in high-income countries. Most studies (16 studies) were done at the community level. The medical visit and consultation and elderly education were the most common interventions. Most of the studies have done with the purpose of cost-effectiveness and using the RCT method. The preventing cost of each fall ranged from $ 272 to $ 880 per person. Also the range of multifactorial interventions ICER rang was from the US $ 120,667 to the US $ 4280.9.

The results of the present study showed that most studies were done at Home level, therefore, it can be because of the length of elderly presence at this level and most of the elderly falls occur in this location. Studies in this area also show that one-third of the elderly who were presented in the community fall at least once a year, while, this is more likely for those elderly who are physically weaker [67-70]. Other possible reasons for further home level studies includes high a control ability variable and confounders in the home environment compared to other areas are low awareness of family members comparing with a nursing home and other centers providers, and also supervision lack to adhere to the principles of the home safety.

Elderly education in preventing falls is another intervention that has been used more frequently than other interventions [38, 56, 58, 61]. The reasons for repeated use of this type of intervention can be due to its complementarity nature with other multifaceted interventions, its low cost and ease of implementation as well as the coverage of a large population of the elderly, which can have a great impact on increasing the effectiveness of multifactorial interventions. Although, some evidence suggests that the effectiveness of education in prevention of elderly falls is low [79], other evidence indicates that this method can be used as an effective and cost-effective method if appropriate education methods used rationally and appropriately [80-82].

The results showed that the most studies done by the RCT method and the rest of the studies were modeling and systematic review. Modeling studies have evaluated the cost-effectiveness of multifactorial interventions with a very large sample size and the most of these studies have confirmed multifactorial interventions as a cost-effective method [39, 45, 56, 60]. This could be due to modeling with very large sample size and at a large area, which significantly reduces elderly falls and shows the cost of interventions to prevent elderly falls and the imposed economic burden very low. However, the most RCT studies did not confirm the cost-effectiveness of multifactorial interventions to prevent elderly falls [38, 47-51, 54]. One of the most important reasons for the results of RCT studies is the high accuracy of these studies in data controlling and the proximity of these studies to reality, since the studies are implemented in the community with considering all aspects. Therefore, the results of RCT studies can be more reliable and realistic. Modeling or simulation studies are less reliable, despite being conducted at a large community level, due to poor community control and lack of real data.

Limitations: One of the limitations of this study is that the research team were used only the English language to search for data. This was also due to the authors’ lack of skill in other languages and to the data type that obtained in this study. Therefore, it was not possible to perform meta-analysis in this study.

Strengths: On the other hand, aging is on the rise in all societies and will the risk of aging falls. Given this, countries need to design and implement effective interventions in this area. One of the most effective interventions to prevent the fall of the elderly is multifactorial interventions. One of the strengths of the present study is that the results of this study can help policymakers in this area for evidence-based decision-making by providing appropriate and comprehensive information.

We are very grateful to experts for contribution and time and invaluable.

Appendix file: 1. Characteristics of the included studies with consideration to multifactorial interventions in fall prevention.