Monitored anesthesia care (MAC) is a planned procedure during which the patients undergo local anesthesia together with analgesic and sedative procedures, in order to achieve a safe sedation together with anxiety and pain control [1], during which the patient is at a level of sedation that can respond to verbal or tactile stimulus, meanwhile the airways are maintained [2]. The ideal agent is an anesthetic which is adequately sedating, characterized by high efficiency and ultra-fast recovery, since the context-sensitive half-time (CSHT) is very short: approximately 3 minutes [1] without causing toxicity [3]. Moreover, MAC allows the patients to be discharged very soon.
Ketamine is a strong N-methyl D aspartate receptor antagonist which produce anesthesia, analgesia, and some degrees of amnesia. It rapidly distributes through CNS via the blood-brain barrier due to its high lipid solubility and induces anesthesia within 45 to 60 seconds. Unlike other anesthetic agents, this medication also maintains airway and airway reflux, but high dose or bolus injection can cause apnea. Also, ketamine can cause hypertension, nausea, dysphagia and illusions [4,5].
Another anesthetic agent with sedative effects is propofol, which is used extensively because of its rapid anesthesia-induction and recovery time; but due to its lack of analgesic effect, higher doses should be used in surgeries requiring analgesia [6]. Propofol-induced anesthesia that is too deep is associated with cardiovascular and respiratory system dysfunction, while light anesthesia can lead to episodes of intra-operative awareness [7,8]. The main concern of propofol-induced hypnosis is providing proper sedation depth, while responding to verbal stimulus, without intra-operative awareness or recall. The incidence of intra-operative awareness in healthy patients is about 0.1% and can increase to 1 to 1.5% in high-risk populations [9]. BIS monitor is the first quantitative EEG index used in clinical practice as a monitor to assess the depth of anesthesia. It consists of a sensor, a digital signal converter, and a monitor. The sensor is placed on the patient’s forehead to pick up the electrical signals from the cerebral cortex and transfer them to the digital signal converter [10]. This method makes it possible to assess the depth of anesthesia and titrating the administration of anesthetic agents, thereby assures accurate dosage and reduces unwanted adverse effects. BIS-guided anesthesia also lowers the incidence and severity of postoperative nausea and vomiting and improves the time to recovery and home readiness which is more economical [11]. Single-drug sedation can be attained using sedatives such as propofol, methohexital, midazolam, etomidate, ketamine, thiopental or primary classes of analgesics, such as narcotics. Since there is no ideal agent with all these features, higher doses of sedatives should be used which in turn increases the rate of adverse effects. To avoid these complications, a combination of several agents may be used at a lower dose [12] which has been shown in numerous studies to be safe and effective, without posing a risk of complications. This study’s purpose was to compare the effects of ketamine-propofol and ketamine-thiopental on bispectral index values during monitored anesthesia care in minor orthopedic surgeries.

Study population
This double-blind parallel-group randomized clinical trial was designed and conducted in an academic hospital (Arak, Iran) during 2015. Before recruitment of the first subject, Study protocol was approved by local ethics committee of Arak University of Medical Sciences (Registration ID: IR.ARAKMU.REC42.1394) and was registered in Iranian Registry of Clinical Trials (IRCT6N 2016032320258; www.irct.ir).The study has been performed in accordance with the ethical standards of the 1964 Declaration of Helsinki. All patients signed the informed consent forms prior to recruitment in the study. Study population were all patients referred to our university hospital for minor orthopedic surgeries. Inclusion criteria were age between 18-65 years, ASA class of I-II, and less than 30 minutes of surgery duration. Exclusion criteria were unwilling to participate in the study, consumption of sedatives or hypnotic drugs, history of psychological illness or drug abuse, and pre-existing allergies especially to anesthetic agents.

Study protocol
Every 5 minutes since initiation of surgery, vital signs and of anesthetic depth was recorded. When surgery was done, patients were asked to express their pain score according to visual analogue scale (VAS). Patients were also questioned whether they could recall their surroundings, or an event related to the surgery. Recovery duration (i.e. time from arriving to the recovery room till full consciousness) were recorded as well. To ensure blindness, data gathering was performed by an anesthesiologist unaware of patients’ allocated group.

Statistical analysis
Sample size was determined to be 45 per group, assuming an α-error of 0.05, power of 80%, and drop-out rate of 10%. Sampling was performed using simple random sampling method. When the study was completed, statistical analysis was performed using SPSS version 19.0 for Windows (SPSS Inc, Chicago, IL, USA). Data are expressed as mean ± standard deviation (SD). One-way analysis of variance and two-sample t-test were used to compare values for normality. Proportions were compared using chi-square test. A two-sided p-value of less than 0.05 was considered statistically significant.

Table 1 The baseline characteristics of the patients included in the current study.

Fig. 1. The CONSORT flow diagram of the study. 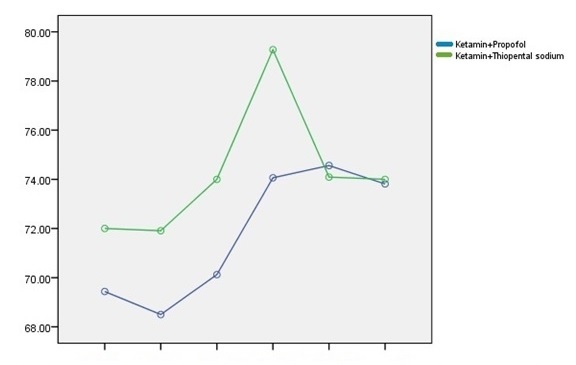 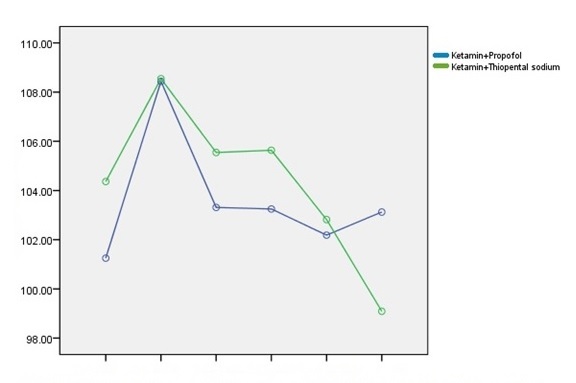 Fig. 4. Comparison of O2 saturation between the two groups in different time points. 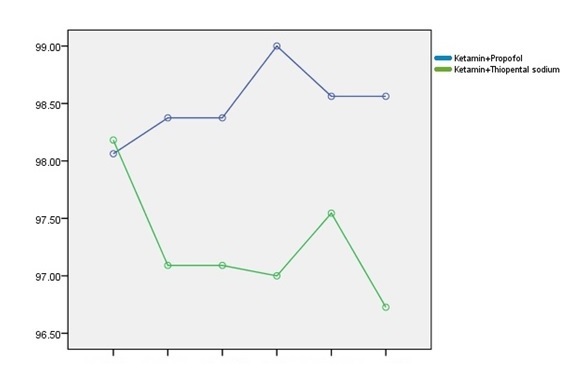 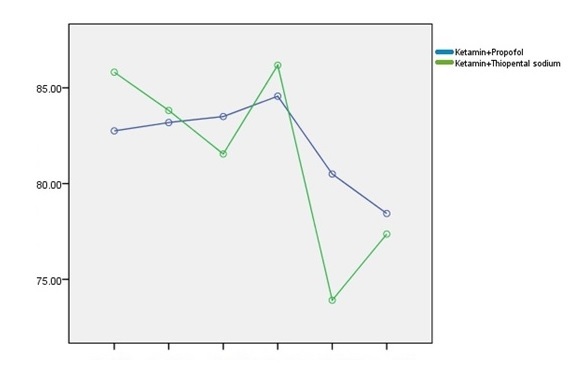 We would like to thank the Deputy Director of Research and Technology of Arak University of Medical Sciences, clinical research development center of Vali-asr hospital and all those who participated in this study. We also thank our colleague Mr. Arsom Taleby who provided expertise that greatly assisted the research.