Pneumocephalus is defined as the presence of air in the intracranial cavity. In most cases, its evolution is asymptomatic and benign. Pneumocephalus post-surgery is a frequent complication of cranial surgery. We herein report delayed tension pneumocephalus after craniotomy for pituitary macroadenoma. A 73-year-old man with recurrent pituitary macroadenoma underwent subtotal resection via subfrontal approach. The postoperative course was uneventful and the patients regained his normal daily living activities. Two months after the surgery the patients developed decreased level of consciousness and was diagnosed to suffer from tension pneumocephalus. Another craniotomy was performed and the dural defect at the base was repair with secondary graft and bone wax. The patient improved neurologically and had no pneumocephalus. The follow-up revealed good condition and outcome. In conclusion, tension pneumocephalus can occur at any time after craniotomy and post-surgical deterioration after resection of a giant pituitary tumor should be immediately assessed. There is not enough evidence to correlated tumor size with rates of pneumocephalus in this particular report, but further cases may need to be studied to come to a conclusion.

Pneumocephalus is the presence of air within the cranial cavity. Free intracranial air implies communication with the atmosphere or paranasal sinuses, although pneumocephalus can be secondary to infection from gas forming organisms [1]. Pneumocephalus is most commonly caused by trauma (75%), tumor, infection, and fistulas between the intracranial cavity and external air spaces [2]. The occurrence of fistulas has been attributed to congenital or iatrogenic causes. The iatrogenic intracranial air is common following intracranial surgical procedures, especially those performed in the sitting position, and it may be entirely benign. It frequently occurs following a variety of surgical procedures of the paranasal sinuses [3]. Burr-hole irrigation of the subdural space for chronic SDH is one of the most common causative operations. Symptomatic pneumocephalus after transsphenoidal pituitary surgery is rare [4,5].
Iatrogenic pneumocephalus have been reported, following intracranial or sinus surgery, thoracic surgery, ventriculopleural and ventriculoperitoneal shunting, anesthesia with nitrous oxide, epidural anesthesia, insertion of lumbar drain, lumbar puncture, intravenous catheterization, nasotracheal intubation, nasogastric tube insertion, insufflation of the middle ear, continuous positive airway pressure after trauma, bag-mask ventilation, skull base radiation, hydrogen peroxide irrigation, halo vest application, and even frequent Valsalva maneuver. One study documented that intracranial air is present in all cases following supratentorial craniotomy [6-8]. Pneumocephalus usually resolves as air and it is gradually absorbed, without any neurologic sequelae or need for treatment [9].

A 73-years-old man, known for pituitary adenoma partially resected transcranially via right subfrontal approach 13 years ago at a different center, presented to our clinic with behavioral changes, memory loss, loss of vision in the right eye and decrease vision in the left eye. He had no seizure and no head trauma. He had not received radiotherapy or another surgery after the first operation. Magnetic resonance imaging (MRI) shows giant sellar and suprasellar mass with bilateral frontal (superior) extensions (Figure 1). A transcranial microsurgery for subtotal resection of the enlarging mass was performed targeting the suprasellar extension using the same right subfrontal approach and leaving only the tumor that was located deep in the sella. The postoperative course went uneventful and the patient status improved significantly. He was fully oriented and developed no new neurological deficit. He had normal behavior and gains his memory again and returns to his daily living activities (Figure 2). Two months after the second surgery, the patient presented with progressive left hemiparesis (muscle powers 2/5) and generalized malaise. He had no history of head trauma during this period and was afebrile on the examination without any CSF leakage. All the laboratory investigations were unremarkable. New brain MRI shows the tumor resection cavity filled with air (tension pneumocyst) that caused a midline shift (Figure 3A). No intraparenchymal communication with the subarachnoid or subdural spaces was detected but directly to the frontal air sinus through a small fistulous opening in the posterior wall of the frontal air sinus that was detected by CT scan (Figure 3B). For both diagnostic and therapeutic purposes, we did needle aspiration under local anesthesia via burr-hole of previous craniotomy using underwater aspiration technique and a lot of air bubbles were released. The patient improved temporarily in response to this aspiration but unfortunately, he deteriorates again in the next few days. A third transcranial surgery was performed on a rather urgent base. Exploration of the pneumocyst revealed a clean air-filled cavity and a small dural defect was detected in the frontal basal dural that is connected through the bony slit to the frontal air sinus. Closure of the dural defect is done using pericranium after irrigation of the cavity with antibiotic solution, then cranialization of the voluminous frontal air sinus and sealing with bone wax was performed. The surgery went uneventful and the patient condition improved gradually with the improvement of hemiparesis until he regained full strength. The immediate postoperative scan shows a reversal of the midline shift (Figure 4). 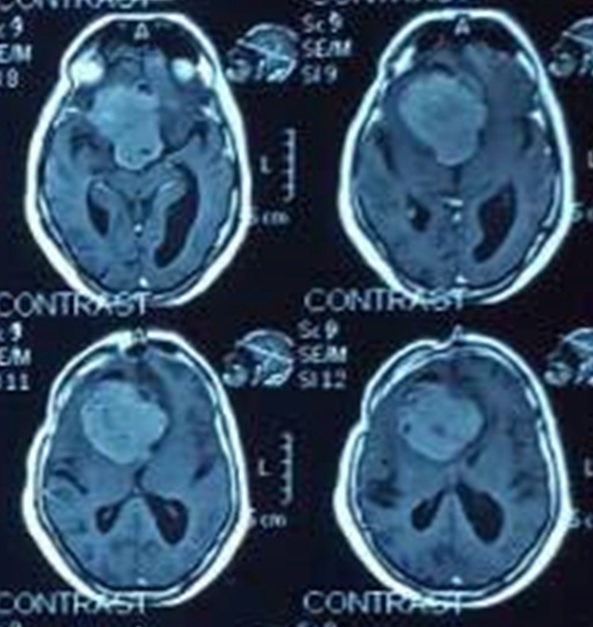 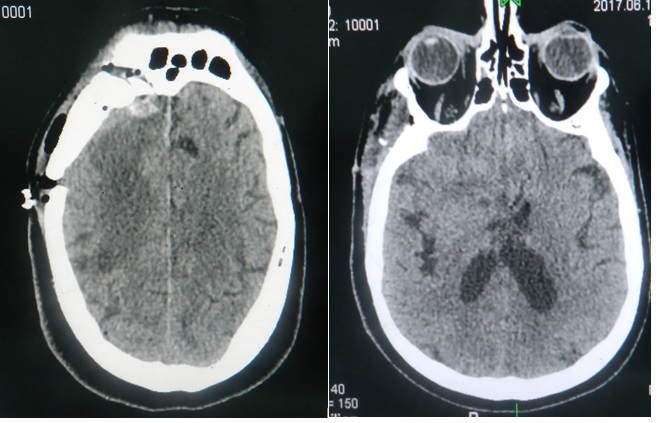 Fig. 2. Axial brain CT-scan of the patients after the first operation revealing subtotal resection of the pituitary macroadenoma through right subfrontal approach without pneumocephalus and hematoma. 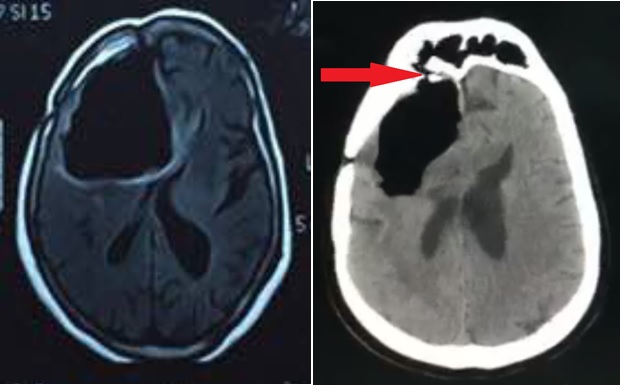 Fig. 3. The axial T1-weighted with contrast MRI of the brain, 2 months after the operation revealing the tension pneumocyst causing midline shift and subfalcine herniation (A); the axial brain demonstrating tension pneumocephalus associated with a defect in the posterior wall of the frontal sinus (arrow) (B). 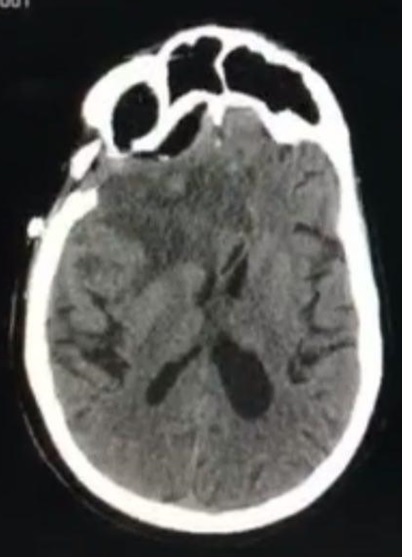 Fig. 4. Early axial brian CT-scan of the patients after the second craniotomy revealing absence of the tension pneumocyst with reduction of midline shift.

Tension pneumocephalus occurs when air enters the extradural or intradural spaces in sufficient volume to exert a mass or pressure effect on the brain, leading to brain herniation [10-13]. Pneumocephalus most often occurs in the subdural space over the frontal lobe or lobes, but it may occur in any of the intracranial compartments. In this case, pneumocephalus involved only the tumor resection cavity, so it can be called a pneumocyst with a quite strange preservation of subarachnoid, subdural and epidural space. The origin of the development of the tension pneumocyst is determined by the preoperative CT scan as a bony slit in the floor of anterior cranial fossa connected to the frontal air sinus. The solid appearance of dural closure noted at reoperation in addition to the unnoticed dural defect at the basal dura in this case and the absence of rhinorrhea undermined a one-way valve explanation.
Potential complications of pneumocephalus include tension pneumocephalus (neurologic dysfunction with increased intracranial pressure) and meningitis, both of which can be fatal [10]. Tension pneumocephalus occurs when air enters the cranium but cannot exit, likely secondary to a one-way valve mechanism, the result is increased intracranial pressure [5]. Tension pneumocephalus is a rare but potentially life-threatening complication in neurological surgery, it has been reported most often after posterior fossa craniotomy, but it also occurs less commonly after supratentorial procedures [8]. Erosion of the dura mater by a tumor such as an epidermoid or craniopharyngioma has also caused tension pneumocephalus [11]. The clinical significance of pneumocephalus is directly related to its potential for infection and is occasionally related to a mass effect when under tension. in tension pneumocephalus, the air itself can cause a space-occupying mass effect that may be life-threatening [2].
Tension pneumocephalus may be manifested clinically by a decreased level of consciousness, headache, seizures, decreased visual acuity, visual field defects, or papilledema. A headache and altered level of consciousness are the most frequent symptoms of pneumocephalus [5,12]. Tension pneumocephalus is best diagnosed on Computarized Tomography (CT scan). Some amount of intracranial air is inevitable after craniotomy, and the finding should be expected at early postoperative imaging. In a retrospective analysis of the CT findings in patients who underwent supratentorial craniotomy, pneumocephalus was present in 100% of patients 2 days after surgery, 75% of patients 7 days after surgery, 59.6% of patients in the 2nd postoperative week, and 26.3% of patients in the 3rd postoperative week. No pneumocephalus was found after 3 weeks [8].
Tension pneumocephalus is a neurosurgical emergency; although similar findings may be seen at imaging in asymptomatic patients, the diagnosis should be made only if clinical deterioration accompanies imaging findings. Treatment may be conservative or surgical [8]. The surgical options for tension pneumocephalus include urgent decompression via burr hole or needle aspiration, repair of the skull defect and closure of the dural fistula. The conservative treatment option is used for the less urgent cases and includes bed rest in an upright position, avoidance of the Valsalva maneuver, analgesia and high concentration oxygen [13-15].
Neurological deterioration as hemiparesis following supratentorial craniotomy for tumor surgery can be caused by hemorrhage, seizures, ischemia, hydrocephalus, or infection. This report documents tension pneumocyst within the tumor resection cavity as an additional, albeit uncommon cause. Prompt evacuation of the pneumocyst resulted in immediate relief of symptoms.
To our knowledge, this is the first case report of tension pneumocephalus or pneumocyst after the transcranial resection of a giant recurrent pituitary adenoma that presented with rapid deterioration of neurological function and warrants urgent surgical exploration and closure of fistulous source of the air bubbles.
In conclusion, tension pneumocephalus can occur at any time after craniotomy and post-surgical deterioration after resection of a giant pituitary tumor should be immediately assessed. There is not enough evidence to correlated tumor size with rates of pneumocephalus in this particular report, but further cases may need to be studied to come to a conclusion.