Avulsion of Ampulla of Vater Secondary to a Blunt Abdominal Injury Treated with Pancreatoduodenectomy; A Case Report and Literature Review

The incidence of complex hepatobiliary injury secondary to blunt abdominal injuries varies between 3.4 and 5%. A 25-year old male patient underwent an urgent operation due to a motorcycle accident. During intraabdominal exploration, Grade 4 laceration was detected at the liver and bleeding was controlled through primary repair. In the postoperative seventh day, he was referred due to 1500 cc bile leakage from the drainage tube. During the operation, an extensive Kocher maneuver was done and the second part of duodenum was observed to be exposed to total avulsion from the head of the pancreas. Pancreatoduodenectomy was planned due to presence of ischemic changes in the second part of duodenum. In the postoperative follow-up, the abdomen was closed with a controlled abdominal closure procedure. The clinical findings of biliary tract injuries secondary to blunt abdominal injuries often manifest themselves late and early diagnosis is possible only with suspicion.

Injuries including biliary tracts, pancreas, and duodenum secondary to blunt abdominal injuries are extremely rare. Although there may be isolated biliary tract, duodenum, and pancreas injuries, complex hepatobiliary injuries including more than one organ due to the severity of the injury can occur [1]. The incidence of complex hepatobiliary injuries ranges between 3.4 and 5% [2]. Hepatobiliary injuries involving the ampulla of Vater are associated with high mortality rates, depending on late diagnosis and, therefore, they are critical to diagnose [3]. In this study, we present a case of avulsion of the ampulla of Vater secondary to a blunt abdominal injury, who was treated with pancreatoduodenectomy (PD). Although, the retroperitoneal location of ampulla vater makes signs and symptoms typical of intraabdominal injuries less obvious. Early diagnosis and awareness of this type injury is lifesaving. We believe that our article providing additional contribution to the literature gives new perspective for the guiding to trauma surgeons.

A 25-year old male patient was referred to our clinic due to the biliary leakage. The patient had an emergency laparotomy at an external center 15 days prior due to a motorcycle accident. During intraabdominal exploration, Grade 4 laceration was detected at 6 and 7 segments of the liver and bleeding was controlled through primary repair. No additional pathology was found in the abdomen. In the postoperative third day, bile leakage was seen. The amount of the leakage increased daily, and the patient was referred on the postoperative seventh day for the presence of 1500 cc bile leakage from the drainage tube. The overall status of the patient was moderate, and he was conscious and cooperative. The physical examination revealed that peritoneal irritation findings were positive. His body temperature was 38ºC, pulse was 135 min, and blood pressure was 100/60 mmHg. Laboratory test results were as follows: aspartate transaminase (AST) 300 U/L; alanine aminotransferase (ALT) 400 U/L; total bilirubin 5 mg/dL; direct bilirubin 3 mg/dL; amylase 500 U/L; creatine: 1,2 mg/dL, hemoglobin (Hg) 10 g/dL, and leukocyte count (WBC) was 15 10³/μL. The patient was scheduled for surgery since he had extensive septic intraabdominal fluid on emergent abdominal USG.
A written informed consent was obtained from the patient.  About three liters of biliary fluid was drained during intraabdominal exploration. Primary suture segments were detected in the 6-7 liver segments. Bile leakage was not detected in the liver laceration area. However, a collection starting from the second part of duodenum and continuing to iliac junction, which was compliance with green bile, was found in the retroperitoneal region. Duodenum and the right colon were mobilized and the bilious collection was drained through the Kocher maneuver. The first, second, and third portion of the duodenum, and the head and neck of the pancreas was exposed with Kocher maneuver by dissecting the lateral peritoneal attachments. The gastrocolic ligament was divided to entry into the lesser sac and the first portion of the duodenum, the medial aspect of the second portion of the duodenum, and the anterior surface of the pancreas were examined in detail. Meanwhile, the second part of duodenum was observed to be exposed to total avulsion from the head of the pancreas (Figure 1A). The common bile duct reimplantation using choledochoduodenostomy was not performed due to infection and tissue edema, ischemia. There for, pancreatoduodenectomy was then planned for the presence of ischemic changes in the duodenum (Figure 1B). Pylorus-preserving conventional pancreatoduodenectomy was performed. Open abdomen procedure was applied to the patient due to intestinal edema (Figure 2A). In the postoperative follow-up in the intensive care unit, intraabdominal edema was regressed, and the abdomen was closed with a controlled abdominal closure procedure (Figures 2B and C). The patient was discharged with healing and comes to regular control. 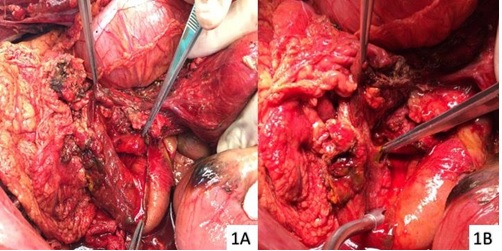 Fig. 1. Avulsion of the ampulla of Vater (A) and duodenal necrosis (B) following the extended Kocher maneuver.

Fig. 2. Closure of the open abdomen with multiple sessions (A-B-C).

Financial Disclosure: The authors declared that this study has received no financial support.