Document Type : Letter to the Editor

Dear Editor,
II have reviewed the manuscript titled “Inferior Vena Cava Reconstruction by Gallbladder patch: An experimental design”, which has been published in the Bulletin of Emergency and Trauma [1]. I wish to commend the authors on their hard work and their ingenuity for this project. Their work is based on sound principles for the use of vascularized, composite grafts in the reconstruction of anatomical structures, vascular and otherwise.
In fact the opposite scenario (the use of venous grafts for the reconstruction of the biliary tract) is well known, having been described first in 1969 [1]. Recent case reports [2] describe the technique in combination with biliary stenting. The use of a vascularized gallbladder as a graft is also well established.  A pedicled gallbladder has been used to reconstruct duodenal injuries [3], repair common bile duct injuries [4] and as a conduit for biliary drainage on a transplanted liver [5]. Likewise, the use of serosal patches of many origins to contain intestinal contamination or for difficult GI enteric reconstructions is an accepted technique in the management of complex injuries. In the previous issue of the Bulletin, one such report was made for the same target organ (the IVC) [6].
As a proof-of-concept, therefore, this study is in distinguished company, and has enough merit to warrant publication. A word of caution, however, must be exercised when translating this results into clinical practice. The incidence of gallbladder disease alone in the Western population makes the use of a pedicled gallbladder graft for this indication inconvenient and potentially dangerous, turning a routine laparoscopic cholecystectomy into a mayor vascular reconstruction in a potentially infected field, the very reason a serosal patch would have been chosen in the first place.
Another question that begs pondering is obvious: does the IVC needs reconstruction? In considering this question one must make a distinction between elective cases and emergency ones.  There is enough evidence to support the attempt to reconstruct the IVC that has been resected during major oncological procedures [7]. Alternatives in use currently include a variety of vascular conduits such as Dacron, Gore-Tex and other varieties of PTFE. There are also autologous grafts, such as renal vein, tubularized saphenous vein, inferior mesenteric vein, ovarian veins, the internal jugular vein, and autologous peritoneum-fascia [8] and pericardium [9], my preferred technique (Figure 1). 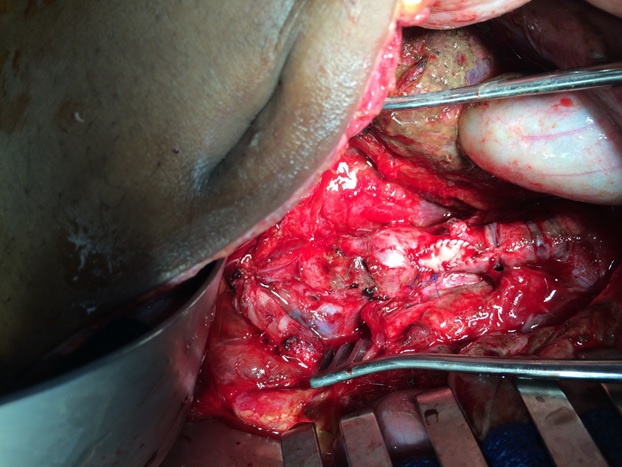 During the damage-control management of a patient with an infrarenal IVC traumatic injury, consideration should be given to the ligation of the vein. This procedure is well tolerated, and follow up has shown little more than trace edema in the lower extremities at 1 year [10]. On the other hand, the suprarenal vena cava does necessitate reconstruction: while the overall survival of the infrarenal IVC ligation was 72%, only occasional survivors are reported above the renal veins for ligation [10]. Short term patency rates have been studied for venous reconstruction in trauma of the IVC. For lateral venorraphy, the patency rate was documented by US, CT scan of both at around 86% [10]. Unfortunately, at this moment there is no long term patency data with the use of interposition grafts or patch-type reconstructions.
In closing: Although a valuable addition to the existing literature on the topic (and a starting point for future research), at this moment there is no impetus to recommend the use of exotic biological vascularized grafts for the management of this type of problem; the use of sound damage-control principles and the current materials available to choose from seem to offer more than adequate results to the majority of patients sustaining this type of injury.