Objective: To evaluate the efficacy of the gallbladder for reconstruction of the inferior vena cava in a canine model.Methods: The experimental study was conducted on 5 dogs; an oval window with a diameter of (4×1 cm) was made in the inferior vena cava and then repaired using the autologous gallbladder patch with preservation of gallbladder function. The patency and functionality of the graft were assessed macroscopically and microscopically at 2 months postoperatively.Results: All the dogs were euthanized at 2 months, showing excellent patency of the vena cava macroscopically. In the microscopic examination, all the patches were completely endothelialized. No evidence of infection and inflammation and thrombosis was noted.Conclusion: The gallbladder patch is an available and safe alternate for reconstruction of the inferior vena cava at least in animal model. However, further well designed prospective studies are needed to confirm this hypothesis.

The inferior vena cava (IVC) reconstruction may be required in some intra and retroperitoneal surgeries such as nephrectomy in renal cell carcinoma, major venous trauma, advanced tumor resection (hepatocellular carcinoma), transplantation and major trauma surgery; but still no ideal graft material has been found. It is often necessary to replace the long segment of the IVC defect using patch grafting, interposition grafting or primary closure that are controversial [1]. But, the grafting techniques are demanding in conditions of the risks of patients afflicted with co-morbid disease such as liver and renal failure, ascites and edema [2]. Prosthetic materials increases costs and the risk of infection, bleeding, poor blood flow and thrombosis [3].
Few studies have compared the long-term patency and complications of autologous patch with synthetic patch graft. Synthetic grafts have been some complications (thrombosis and infection) and also, autologous materials (the rectus fascia sheath, renal capsule and peritoneum) possibly have a lower rate of infection and thrombosis and has been associated with satisfactory patency for venous grafting, compared with prosthetic materials [4-10].
The use of peritoneum was associated with thrombosis and need the use of anticoagulant drugs to preserve lumen patency [11-15].
In the present study, the authors developed an animal model of vena caval reconstruction with a gallbladder serosal patch to demonstrate its clinical applicability. It is readily available and does not need an additional incision or result in additional cost. Moreover, the technique for its harvest is simple. A review of the published data showed that segment of autologous gallbladder has not previously been used as a patch graft for IVC reconstruction

Surgical technique
All the animals were anesthetized by intravenous administration of 3-5 mg/kg thiopental sodium (Pentothal, Abbott, Stockholm, Sweden).  They were then tracheally intubated and connect to a ventilator. General Anesthesia (G/A) was maintained by halothane. Afterward, an intravenous injection (30 mg/kg) of cephalotine (Jaber ebne Hayyan, Tehran, Iran) was given. Then the dogs were prepared by Povidone-Iodine solutionand draped properly. Midline laparotomy was performed for entering the abdominal cavity. First a primary exploration was done. The gall bladder was released on base of cystic artery and cystic duct from bed of liver. The abdominal IVC, up to renal vein, exposed. The IVC was completely cross-clamped at 2 sites 7-10 cm apart. Segmental patch resections (4×1cm) were then made on the vena cava. These segments were repaired by placing the gallbladder serosal patch with continuous Prolene 5-0 sutures. Local homeostatic care was applied, and the abdomen closed (Figure 1). In fact, the gallbladder was dissected from bed of the Liver. The Surgeon left the gall- bladder attached to the artery and duct and then a part of the gallbladder wall with its lumen intact was placed on the defect of IVC and its serosal was sutured to the cut edges of the vena cava. Next, a dose of cephalotine was given intravenously, but no additional antibiotics, antiplatelet or anticoagulant agents were given during the postoperative period. Each dog was kept in a separate cage and there was an unlimited access to food and water. 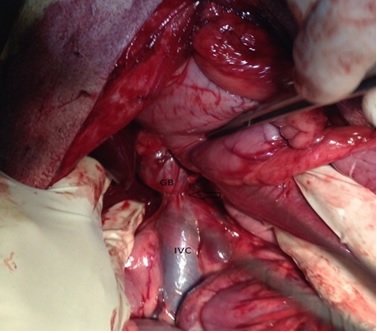 Outcome measures
Two months later, the dogs were anesthetized as described, abdominal midline incisions were made, and the grafted gall bladder was exposed and evaluated macroscopically for the patency and formation of aneurysm. The vena cava was clamped, and the reconstructed segments with 1-2 cm of native IVC margins removed.

All the animals survived the operation and the subsequent observation period for two months. The average operative time was 70 minutes. All the animals started on diet the first post-operative day. All abdominal wounds healed primarily and none of the dogs developed any postoperative complication such as obstruction, and there were no fatalities. Occurred and no hind limbs extremity edema and engorgements of superficial veins in the abdomen. The wounds that were dressed daily for two days did not presented signs of infection in follow up visits.
Two months later the all of the dogs were brought again to operation room, received G/A and were explored for macroscopic evaluation of the target region and harvest of the reconstructed IVCs and associated gallbladder. Macroscopic evaluation of the abdomen at second laparotomy showed no signs of infection, adhesions, collection at the patch sites.
Infra-renal IVC including the grafted gallbladder was harvested and the dogs were sacrificed. All the IVCs were patent (checked with an Endo Tracheal Tube NO: 8), and no sign of stricture and stenosis or obstruction and narrowing of the cava and pseudoaneurysm formation were found (Figure 2). 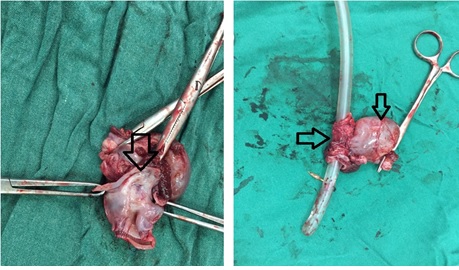 Gross pathologic evaluations showed that the lumen of the veins were patent, without any inner irregularity or gross thrombosis. Mild thickening of the walls was seen at the anastomosis. All samples were fixed in formalin (10 %) and sent for histologic assay.
Patency of lumens was confirmed in histology. Microscopic examination of the slides from the anastomosis sites and the gallbladder patch showed mild fibrosis and the lumens were endothelialized completely and revascularization of the inner layer of gall bladder grafted IVC (Figure 3A, Table 1). Also, chronic inflammatory cells were present around the suture lines. Moreover, normal endothelial and medial layers were observed in the native IVC (Figure 3B). Macroscopically, all of them revealed patent lumen which was confirmed in pathology study. No thrombosis was seen in the target region and other sides of IVC lumens. The wall of lumens was composed of a fibro-fatty tissue with no definite and identifiable three-layer pattern (intima, media, and adventitia) of true vessels. The lumens were endothelialized completely.

Fig. 3. A. Sections from the gall bladder patch can be seen in the left, arrow show the endothelialized part (*). There is no inflammation of fibrosis. B. Sections in the right side show the native vein, the arrow shows the native endothelium. (H&EX 100)

IVC reconstruction is essential in cases of multiple major traumas and also after resection of invasive liver malignances, renal cell carcinomas (RCC), and adrenal gland carcinomas. IVC reconstruction can improve survival of patients with malignancy [1,9,16]. Venous grafting procedures are known as a revolution in cardiovascular surgery. There are several options for repairing IVC injuries including patch cava plasty with autologous or prosthetic grafts, interposition grafting, and primary suture repair or end-to-end anastomosis. All of them should be considered in selected cases. The lack of suitable veins for large vein repair has led to the use of saphenous veins, [4] jugular veins, [17] or paneling the veins into a composite tube [18].  Interposition of ringed polytetrafluoroethylene (PTFE) prosthesis has also been used as a synthetic option to autologous vein grafts for the reconstruction of the inferior vena cava, the portal vein and the iliac vein [19, 20].
A review of the published data showed that segments of autologous gallbladder have not previously been used as a patch graft for IVC reconstruction. The present study has shown that patch grafting of the IVC with gallbladder is associated with patency and complete endothelialization of the graft. There are few studies that compared the patency and complications of autologous patch grafting with those of synthetic patch grafting. Compared with prosthetic materials, autologous materials have a lower rate of infection and thrombosis in low-flow systems such as the IVC [4, 6, 16, 21-24]. The use of autologous materials such as the rectus fascia sheath [7] and peritoneum [4, 8-9] renal capsule [16] for venous grafting has been associated with satisfactory patency. Nishibe et al., [10] used an omental wrap to cover a polytetrafluoroethylene graft for portal vein replacement, promoting the healing process of the graft. The present study used the gallbladder, because it is readily available and does not need an additional incision or result in additional cost. Moreover, the technique for its harvest is simple.  The use of peritoneum was associated with thrombosis, and requiring the use of anticoagulant, antithrombotic, or anti-inflammatory drugs to maintain lumen patency [11-15]. Grafts in the venous system do not perform as well as their counterparts in the arterial system because of several unique characteristics of the venous environment.
In the present study, we used no additional antiplatelet or anticoagulants during the postoperative period, and all the grafts remained patent. It was shown in the present study that gallbladder serosal patches did not cause stenosis of the IVC, even without postoperative administration of anticoagulant or antithrombotic drugs. This finding is similar to that of the study by Akimaru et al and Hodjati et al., [4,16] that used peritoneal and renal capsule patches. However, Salimi and Hodjati et al., [9] reported that the use of peritoneal patches led to complete occlusion in 2 cases in their study. All the grafts in the present study were completely endothelialized over the inner surface of the lumen. Endothelialization is important for prolonged patency of the grafts [4, 25]. In the present study; endothelialization was realized after 2 months, although it had occurred after 15 Days of peritoneal patching in the study by Akimaru et al and after 3 months of renal capsule patching in the study by Hodjati et al., [4, 16]. In addition, no remarkable pathologic change was found in the native gallbladder after 2 months. More studies with longer follow-up and gallbladder function marker level are necessary to examine the applicability of the technique and possible associated complications.
Salimi and Hodjati study showed that the peritoneum could be used for venous reconstructions in expectation of the similarity of mesothelial cell to venous endothelial cell [9]. We previously used renal capsule graft for venous repair [16]. The study showed for the first time that a renal capsule patch can be used for reconstruction of the inferior vena cava with good patency and low risk of infection. Recently, we used small bowel serosal patch for IVC reconstruction. The survival, patency and histopathologic finding were not as favorable as the current study [26].
The main study limitation is the small sample size.  In the present study, it seems that the gallbladder is an excellent patch source for replacement of inferior vena cava especially during trauma. There is not thrombus formation, infection in site of the gall bladder anastomosis. There is complete patency and endothelialization without aneurysm formation in site of the gall bladder insertion. To the best of our knowledge, this is the first report of IVC reconstruction by gallbladder serosal patch. The findings of the present preliminary experimental study have shown for the first time that the gallbladder patches can be used for reconstruction of large veins in a canine model. The reconstruction was associated with no thrombosis, infection, adhesion and occlusion after 2 months of the procedure. The results may provide a basis for future research.

Conflicting Interest: The authors had no conflict of interest.

Funding: The authors had no funding.