Blunt traumatic aortic injury is a deadly phenomenon in traumatic injuries. Damage control is essential in the management of traumatic patients. We reported a 20-years-old man brought to the trauma center from a car turnover crash scene. Blunt traumatic aortic injury grade III was revealed by contrast-enhanced computed tomography requiring urgent intervention. After an uneventful open repair of the aorta with Dacron graft, diffuse blood oozing occurred from the mediastinum and left pleural cavity. We packed the thoracic bleeding sites and removed the packings after four days. The patient developed no signs of cardiopulmonary compromise until the removal of the packings. Later, the patient was discharged with no complications. Through the followups, he had no complaint regarding the surgery. The patient has a normal chest x-ray one year later. Thoracic gauze packing is limitedly practiced due to concerns for cardiopulmonary compromises. To the best of our knowledge, this is the first time that this technique has been performed in the open repair of blunt traumatic
thoracic aortic injury as damage control.

Blunt traumatic aortic injury (BTAI) is one of the leading causes of death in road traffic accidents [1]. The primary strategy in managing traumatic patients is damage control (DC). During DC, the patient goes through a series of interventions to repair injuries while confronting the lethal triad of acidosis, hypothermia, and coagulopathy.  Contrary to the fundamental role of gauze packing in abdominal DC surgeries for intractable bleedings, this technique is not well established in thoracic trauma patients due to concerns for cardiopulmonary compromise [2, 3]. We intend to share our experience in a case of BTAI with multiple accompanying injuries by considering the limited number of studies that support the gauze packing role in thoracic damage control surgeries.

A 20-years-old man was brought to the trauma center from a car turnover crash scene. On arrival, his vital signs were as follows in the Emergency Room: blood pressure (BP)= 74.44; heart rate (HR)=142; respiratory rate (RR)=28; temperature=36.4°C and Glasgow coma scale (GCS)=12.15. On focused assessment with sonography in trauma (FAST), free fluid was detected in the abdominal cavity. Therefore, the trauma surgeon decided to transfer him to the operating room for exploratory laparotomy immediately. In the operating room, the patient underwent splenectomy due to his shattered spleen, and liver packing (3 lap sponges) for liver laceration.

Further imaging was requested to determine the extent of the injuries as vital signs of the patient were stabilized postoperatively. Further workups disclosed brain contusion, right mandibular body fracture, multiple right-sided rib fracture, left-sided hemothorax, and intercondylar fracture of the right femur. Moreover, it was revealed that the patient had a traumatic aortic injury in the descending part of the thoracic aorta (grade III BTAI) distal to the left subclavian artery (Figure 1). 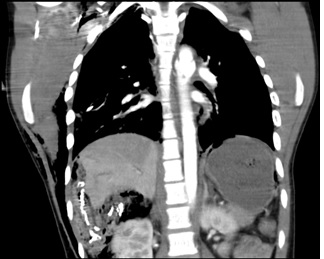 At this point, we visited the patient as vascular surgeon for BTAI management. In our routine preoperative examination, his vital signs were as follows: BP=142/82; HR=105; RR=18; Temp=37°C and femoral pulses of the patient were absent. Due to brain contusion, optimal medical therapy for blood pressure control was not possible. Considering the condition of the patient, endovascular repair of aortic transection would have been the treatment of choice for the patient. Unfortunately, at the time, the proper stent-graft size was not available in the stock. Since the patient had left-sided hemothorax and bilateral absent femoral pulses, a delayed intervention was not possible. Consequently, urgent open surgery was the inevitable choice of treatment for the patient.

Left posterolateral thoracotomy and thoracic aorta repair with Dacron graft 16 on femoral artery-femoral vein (FA-FV) cardiopulmonary bypass were carried out uneventfully. Although activated clotting time (ACT) was normalized by protamine sulfate injection, the patient had diffuse blood oozing from the mediastinum and left pleural cavity. Considering the extent of the coagulopathy and cardiopulmonary bypass time, we decided to meticulously pack the left pleural cavity with lap sponges as damage control (Figure 2). Furthermore, distal lower extremity pulses were now palpable. In the Intensive Care Unit, we closely monitored the patient, but there was no signs of cardiopulmonary compromise or infection. Then, the patient was transferred to the operating room for liver pack removal after two days. Four days after thoracotomy, the patient was brought back to the operating room for thoracic pack removal and reevaluation of the mediastinal and left thoracic cavity. The thoracic packs were carefully removed and no active bleeding or oozing was seen from the mediastinum or pleural cavity (Figure 3). The left lung was inflated without any problem. The patient was discharged from vascular surgery ward after six days with no complication and referred to orthopedic and maxillofacial surgery for further interventions. In the past two years, the patient has been visited, showing no signs of any complication or infection regarding BTAI surgery or the thoracic gauze packing technique (Figure 4). 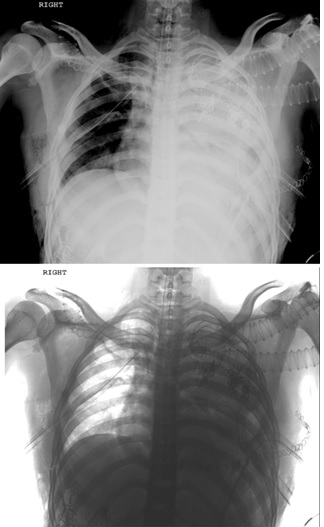 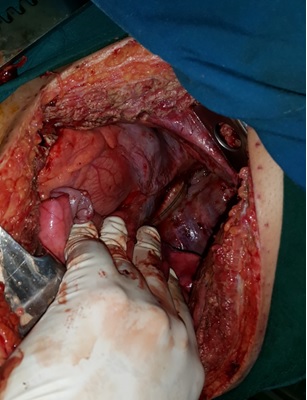 Fig. 3. No signs of bleeding after thoracic pack removal. 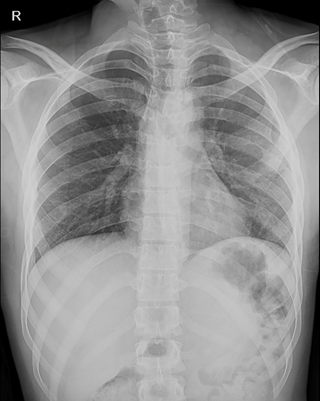 Fig. 4. Follow-up chest X-ray one year after the surgery.

Blunt traumatic aortic injury (BTAI) is considered to be among the leading causes of morbidity and mortality in motor vehicle accidents. Depending on the anatomy of the aorta, accompanying injuries and hospital resources, the aorta is repaired either by open surgery or endovascular therapy. Thoracic endovascular aortic repair (TEVAR) is now considered as the standard care for BTAI patient [1]. However, in our exceptional circumstance, considering the unavailability of proper stent graft, left-sided hemothorax, and absent femoral pulses, an early open repair of the thoracic aorta was the only available option. Standard open repair for BTAI is done by replacing the aortic injury by Dacron graft while the patient is on cardiopulmonary bypass [1].

Gauze packing has been performed in lateral, apical, and posterior thoracic recess to manage thoracic wall bleedings in DC surgeries [4]. Nevertheless, there is a limited experience to use the packing technique in the medial part of the thoracic cavity due to the anatomy of adjacent organs. In our case, contrary to the fact that partial thromboplastin time (PTT) was reversed, we faced diffuse bleeding which could not be stopped surgically. Considering the long cardiopulmonary bypass time, hypothermia, and aggravating metabolic acidosis, we decided to pack the left hemithorax bleeding sites with lap sponges covering the lateral aspect of the mediastinum, the aortic graft, and posterior thoracic recess.

Moriwaki et al., [4] used the gauze packing technique in 12 multiple trauma patients with uncontrollable thoracic bleeding, which led to hemostasis in seven of them. The study included only one patient with an aortic injury who died after establishing thoracic hemostasis. In our case, we did not observe any impairment in cardiopulmonary function postoperatively. We removed our packings four days after the aortic repair as the patient was stabilized hemodynamically. The reason for this four-day delay was because we were obligated to remove the liver packing after two days, and we wanted to avoid laparotomy and thoracotomy at the same time. Through re-exploration and irrigation of the left thoracic cavity, we observed no active bleeding from the previous sites. The patient had no signs of mediastinal or pleural complication through his follow-ups.

Our experience in the case suggests that gauze packing in the medial part of the thorax could be a life-saving technique in patients with intractable bleeding of aortic surgeries outweighing possible risks such as thoracic compartment syndrome or infection.

To the best of our knowledge, what we did was the first time that intrathoracic packing technique was successfully used in a patient who underwent thoracic aorta open repair. The role of intrathoracic gauze packing in the management of intractable traumatic or perioperative bleedings and its effects on cardiopulmonary function are recommended to be further studied.

Ethics approval and consent to participate: This article was approved by Shiraz University of Medical Sciences ethical committee.