Small Bowel Obstruction As a Consequence of Peritoneal Tuberculosis

Peritoneal tuberculosis (PTB) is a rare subset of extrapulmonary tuberculosis which account for only 0.5-1% of all cases. PTB diagnosis can be challenging due to nonspecific clinical manifestations. We present a known case of pulmonary tuberculosis that admitted to the surgery ward due to the major complaint of abdominal pain since ten days before admission. In imaging studies, positive findings favoring mechanical obstruction were detected. There were also several hypodense lesions in the liver suggestive of visceral tuberculosis. An adhesion was noted during exploratory laparotomy prior to the ileocecal valve responsible for intestinal obstruction, which was released. Pathology reports of excised tissues were consonant with the PTB diagnosis. PTB diagnosis can be challenging because of its presentation. This can delay the treatment of patients and thus increase morbidity and mortality. As a result, physicians should always be aware of the PTB diagnosis in patients with nonspecific abdominal involvement.

Tuberculosis (TB) is a significant problem in the field of infectious diseases. It is estimated that 1.5 million TB deaths occurred in 2019 [1]. The lungs are the main involved organs, while other parts of the body could also be affected as an extrapulmonary tuberculosis (EPTC). In 2019, 7.1 million tuberculosis cases were reported, which 16% were EPTC, from 8% in the Western Pacific region to 24% in the Eastern Mediterranean region [1]. Peritoneal tuberculosis (PTB) is a subset of the EPTC, which accounts for only 5% of all EPTC cases [2].

PTB diagnosis can be challenging due to nonspecific clinical manifestations includes asthenia, anorexia, weight loss, abdominal pain, ascites-induced abdominal distention, and intestinal obstruction. This can lead to diagnosis delay and initiation of anti-tuberculosis treatment, which increases morbidity and mortality [3]. In this case report study, we present an adult man with concomitant peritoneal and lung tuberculosis.

We report a case of a 41-year-old married, nonsmoker man who brought to the hospital with the major complaint of abdominal pain, accompanied by nausea and vomiting since ten days prior to admission. Three months earlier, he had experienced shortness of breath which exacerbated when lying on his right side (Trepopnea). The patient had productive cough and fever during the hospital stay. No chest pain, paroxysmal nocturnal dyspnea, and lower extremity edema were detected. Our patient tested negative for SARS-CoV-2 with Polymerase Chain Reaction (PCR). Electrocardiogram (ECG) was unremarkable. Ultrasound study at the time showed minimal free fluids in the abdominal cavity and dilated hypo peristaltic bowel loops in favor of partial bowel obstruction. In chest radiography, consolidation in the right lung and right side pleural effusion was detected. Thoracentesis was performed and about 120 ml of exudative pleural fluid was extracted. Bronchoscopy and biopsy confirmed the pulmonary TB diagnosis. The medication was started for the treatment of pulmonary TB, and the patient was discharged. The patient was relatively in good condition for two months when he developed abdominal pain, nausea, and vomiting. After ten days, he visited the hospital and admitted for better evaluation. He described his Abdominal pain as generalized, intermittent, and his vomit as massive, non projectile and bilous. He also had a positive history of constipation and obstipation. Initial vital signs were stable with a body temperature of 37ºC, respiratory rate 18/min, pulse rate of 80/min, arterial blood pressure of 116/80 mmHg, and arterial oxygen saturation of 98%. We detected mild generalized abdominal tenderness without abdominal distention, guarding, or rebound tenderness in physical examination. The patient did not have any dyspnea in the course of hospitalization. Laboratory results reported mild anemia (hemoglobin was 12.7 gr/dl (normal range 13.5-17.5 gr/dl for men)), No leukocytosis (white blood cell count was 9.7×103 /μl (normal range 4.5-11×103/μl)), or thrombocytosis (platelet count was 377×103 /μl (normal range 150-450×103 /μl)). Renal function test showed slightly increased creatinine (1.55 mg/dl (normal range 0.7-1.2 mg/dl)) and normal blood urea nitrogen (16 (normal range 7-30 mg/dl)). He had mildly decreased estimated glomerular filtration rate(eGFR) (66.53 ml/min (normal range 90-120 ml/min)), Which was calculated by the Cockroft-Gault formula. Electrolyte levels were within the normal range. Liver enzymes were normal. Alkaline phosphatase was elevated (316 U/L (normal range  40-150 U/L)) and hypoalbuminemia was also detected (2.9 gr/dl (normal range 3.5-5 g/dl)). 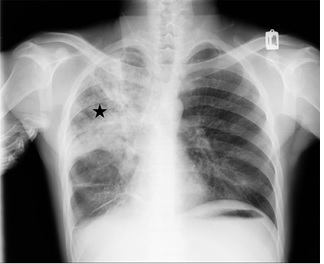 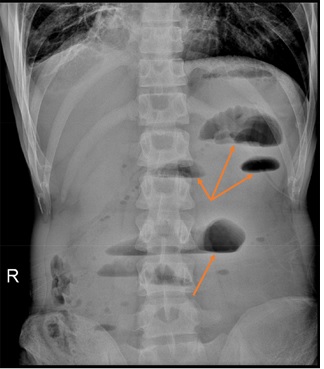 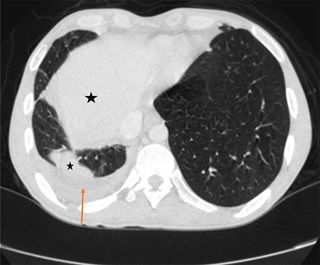 Fig. 3. Computed tomography scan of the chest; Right-sided pleural effusion is associated with relative pleural thickening and enhancement (arrow). It also showed Irregular consolidation with fibrotic change and subsegmental atelectasis in the right lower lobe of the lung (stars). There were also some centrilobular nodules in the right middle and left lingual lobe. 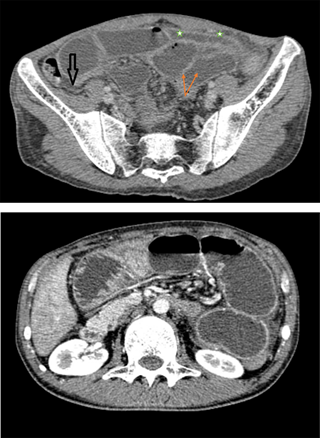 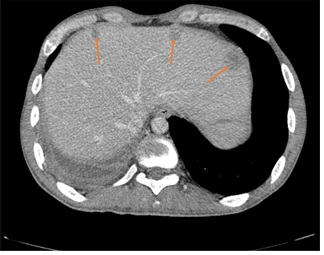 Fig. 5. Computed tomography with the contrast of abdominal cavity; The liver was normal in size with slightly heterogeneous parenchymal enhancement without extra or intrahepatic bile duct dilatation. Several hypodense lesions were seen in the right and left lobe of the liver with relative enhancement in the Porto venous and delayed phases of CT scan (arrows); the largest one measured 12 x 8mm, suggestive for visceral TB.

On the 2nd day of hospitalization, the patient was transferred to the operating room for exploratory laparotomy. During the surgical exploration of the abdominal cavity, severe adhesion was noted, and adhesiolysis was done. The cause of mechanical obstruction seemed to be an adhesion band about 20 cm prior to the ileocecal valve, which was released. Due to severe inflammation of the appendix, appendectomy was also performed with double ligation method. Another finding was TB-like lesions all along with the small bowel, colon, omentum, and liver surface. We sent excised tissues to the pathology laboratory for further evaluation. Pathology reports were consonant with the diagnosis of PTB as all the samples had caseating granuloma formation despite negative acid-fast staining. After the operation, anti TB medications (Ethambutol 500mg and Rifampicin 150 mg once daily) resumed. Three days later, after complete recovery, he was discharged with follow-up of a general surgeon, and infectious specialist.

Peritoneal TB is a rare disease and accounts for only 0.9% of all TB cases [4]. The leading cause of PTB is mycobacterium tuberculosis, which involves the abdomen by the hematogenous spreading path from other infected organs, usually the lungs. The abdominal cavity can also be infected by ingestion of contaminated food or milk or even infected sputum, spreading from nearby foci or through the lymphatic drainage system [5]. In our patient, peritoneal involvement was likely secondary to pulmonary TB.

PTB has a broad spectrum of clinical manifestations; its presentations might vary from an acute abdomen which require an emergency intervention to an incidental finding [6]. It can mimic other abdominal pathologies like neoplastic diseases, liver cirrhosis, or congestive heart failure that result in delayed diagnosis, therefore, complications such as intestinal obstruction increases [7]. This happened to our patient as well. Despite pleural effusion and positive findings in favor of intestinal obstruction, the patient’s condition was not addressed appropriately due to delayed diagnosis of peritoneal tuberculosis in the first admission and led to the need for emergency surgery for releasing the adhesive band three months after the onset of symptoms.

Generally, PTB consists of three subtypes, the wet-ascitic type, which is characterized by the excessive amount of free or loculated fluid in the abdominal cavity, the fixed fibrotic type with involvement of omentum and mesentery, and presence of matted bowel in imaging and occasionally loculated ascites, and finally the dry plastic type which is known to be presented with adhesion bands and peritoneal nodules [5]. In our case at the second admission, no fluid was detected in the abdominal cavity and it seems that our patient had a mixed dry plastic and fixed fibrotic type which is an usual phenomenon [5]. Absence of ascites can make the diagnosis even more problematic as the ascitic fluid analysis is the most beneficial nonoperative identifying method of peritoneal tuberculosis [8]. Ascites fluid is frequently used to measure the levels of adenosine deaminase enzyme in peritoneal tuberculosis cases, white blood cell count, lactate dehydrogenase, serum-ascites albumin gradient (SAAG) score, and cancer antigen-125. Ascites fluid is also usually sent for acid-fast bacilli staining (only positive in 3% of cases), culture, and PCR to find the presence of mycobacterium gene [9].

Our patient had concurrent findings of peritoneal and pulmonary tuberculosis on chest radiography. Another modality is a CT scan that can help with the diagnosis of PTB. However, it does not give specific clues but can occasionally be helpful by revealing findings like smooth peritoneum with minimal thickening and pronounced enhancement to differentiate from abdominal carcinomas. Computed tomography (CT) scan can also report peritoneal, mesenteric, and omental thickenings with caseous nodules, lymph node enlargements and fibrinous adhesions, an entanglement of bowel loops, air-fluid level and dilated bowel loops in favor of mechanical obstruction, and free or loculated fluid [10]. Solid organs often get involved by the homogenous spread of the bacteria. There were several hypodense lesions in our patient’s liver, comparable to other studies that describe visceral tuberculosis of the liver with hypovascular nodules in its parenchyma [10].

Intestinal obstruction is one of the most devastating complications of PTB, which requires emergency surgical intervention [11]. Usually, band or adhesion is the most common operative finding, which resolves by adhesiolysis and release the adhesion band [12]. The surgery Outcome is affected by the duration between symptoms’ developing of intestinal obstruction and surgical intervention, therefore, prompt intervention after the presentation of the symptoms is advised [13]. Overall, if patients do not develop complications such as bowel obstruction and perforation, they have a good prognosis after being treated with anti-tuberculin medications, which starts in two months of a four drug therapy includes isoniazid, rifampicin, ethambutol, and pyrazinamide daily, followed by four months of isoniazid and rifampicin daily [14].

Ethics approval and consent to participate: The patient has consented to the submission of the case report to the journal.

Consent for publication: The participant has consented to the submission of the case report to the journal.

Funding: No funding was received for this article.