A Case Report: Surgical Removal of Missing Guide Wire, Is it the Best Intervention?

Nowadays, the use of central venous catheter insertion (CVC), has abundantly increased. It is a common technique in critically ill patients who are admitted to intensive care and emergency departments in order to hemodynamic monitoring and fluid and medication administration. In this report, we express a 28-year-old man who has multiple trauma with decreased level of consciousness during a car accident three months ago and needs intensive care and monitoring by central venous catheter placing. A missed guide wire remaining inside the venous system after peripherally inserted in femoral vein that was incidentally diagnosed by taking a chest X-ray after three months. Although, guide wires are often retrieved by snaring catheter under fluoroscopic guidance and an interventional cardiologist, we have successfully extracted the lost wire through vascular surgery. Eventually, this report is supposed to increase awareness of this rare and preventable complication and to provide a solution to prevent this complication. Finally, the purpose of this report is to emphasize that surgical extracting is the best intervention to remove the missed guide wire (after 3 months) and this option
could be developed, introduced and standardized in appropriate and controlled conditions.

Nowadays, using the central venous catheter insertion (CVC) has abundantly increased [1]. It is a common technique in critically ill patients who are admitted to intensive care and emergency departments in order to hemodynamic monitoring and fluid and medication administration [2]. CVC insertion can be associated with various complications such as failure to place catheter (22%), catheter malposition (4%), pneumothorax (1%), hematoma (4.7%), bleeding, infection, cardiac arrhythmia, arterial injury (1%), arterial puncture (4.2–9.3%), hemothorax (less than 1%), cardiac arrest (less than 1%), and missing (lost) guide wire in the venous system. As soon as the guide wire gets stuck or lost, it is diagnosed by a doctor and removed. In this report, we express a case of a missed guide wire remaining in femoral vein (from right internal jugular vein to right internal iliac vein) that was incidentally diagnosed by taking a chest x-ray after three months. Missing guide wires are often retrieved by snaring catheter under fluoroscopic guidance [3].

The patient is a 28-years-old man who suffered from multiple trauma during car accident three months ago and has been transferred to our center by emergency medical services. The patient was injured from multiple fractures in his limbs and decreased level of consciousness. After initial preparation and central venous catheter insertion in right femoral vein, he underwent orthopedic surgery and transferred to the surgical intensive care units (ICU’s) for precise monitoring. No specific medical history was reported for the patient except the smoking and opium abuse history. The patient became a candidate for tracheostomy tube implantation because of decreased level of consciousness (Glasgow Coma Scale = 7) and long-term intubation. After 40 days, his general condition improved and discharged from the hospital with a disposable tracheostomy tube. The patient occasionally complained chest pain and right neck pain, afterward. He returns to hospital after 2 months in order to replace the tracheostomy tube with a metal one. In preoperative evaluation, the chest X-ray revealed a wire-like foreign body from the internal jugular vein to the right internal iliac vein (Figures 1 and 2). 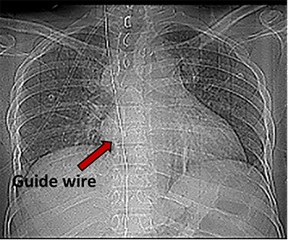 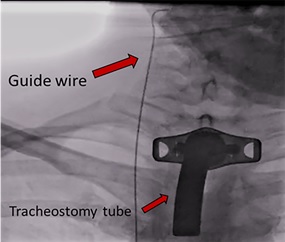 The patient was referred to the cardiac ward, to attempt for guide wire removal by an interventional cardiologist. The effort was made to remove the guide wire through the right femoral vein by means of a snaring catheter. This procedure was performed repeatedly through the internal femoral and jugular vein. Unfortunately, the interventional procedure was not successful due to guide wire adhesion to venous wall and being stuck. After obtaining the informed consent, patient was scheduled for surgical removal of guide wire (Figure 3). 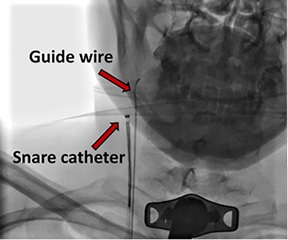 The patient was transferred to operating room. In supine position with left rotation of his neck, general anesthesia was introduced with airway management and replacement of metal tracheostomy tube with a disposable one. Then, the internal jugular vein was exposed by incision in the anterior aspect of the right sternocleidomastoid muscle (SCM) and opening the carotid sheath.  The proximal, distal and facial vein were controlled. The guide wire was palpable and determined. Thorough 5 millimeters longitudinal incision on anterior aspect of internal jugular vein and due to adhesion of guide wire to the vein (following clot formation and organization) and to prevent further injury to venous wall, the guide wire was gently and slowly detached from the interior wall and entirely distracted and removed. Also, the clots were removed and blood flow was restored due to presence of clots and lack of blood flow in the internal jugular vein. The venous wall was primarily repaired with 5.0 polypropylene suture and homeostasis was completed (Figure 4). The patient was undergoing echocardiography evaluation and revealing stable heart condition with no evidence of clot in the right heart system and then discharged uneventfully after 2 days. In outpatient follow-up, his condition was appropriate.

In the last decade, the number of reported cases of guide wire remain following the increased of central venous catheterization which is associated with risks [1]. Therefore, physicians should be aware of the immediate and delayed complications associated with vascular catheterization. It is routinely applied in intensive care and emergency departments for hemodynamic monitoring and fluid and medication administration [2-5].

Most of the time, the guide wire gets stuck or lost which is immediately diagnosed by clinician and removed. However, this complication is preventable and rare. The mortality rate inside the circulation is reported as high as 20%, due to the guide wire remaining.

Missed guide wires in the vessels may not necessarily cause symptoms and  remaining for a long time with delayed diagnosis [4, 5]. It is important to investigate and accurate the factors leading  guide wire complications as follow: low level of experience, high volume of work burden, lack of awareness of the consequences of catheterization complications, fear of losing vascular access and lack of a mark on the guide wire [1-3, 6].

As a result, such events can be prevented by developing skills, training with the help of simulators, and precise supervision of the operators

Eventually, this report is supposed to increase awareness of this rare and preventable complication and providing a solution to prevent this complication. Finally, the purpose of this report is to emphasize that surgical extracting is the best intervention to remove the missed guide wire (after 3 months) and this option could be developed, introduced and standardized in appropriate and controlled conditions.

Ethics approval and consent to participate: This case report was approved by the ethics committee of Semnan University of Medical Sciences, Semnan, Iran by ethics code IR.SEMUMS.REC.1399.254. Consent was obtained from the patient regarding the publication of this case report.

Authors' contributions: All authors participated in the same way in the design, bibliographic search and writing of the manuscript.