Traumatic cervical translational injury is a notably rare and highly unstable subtype of type C sub-axial cervical spine injury with high morbidity and mortality rates. Hereby, we report a 41-years-old man who was a case of multiple trauma due to car rollover. He was completely conscious, complaining of cervical pain, with a GCS score of 15/15. His neurological examination was unremarkable. The cervical CT scan revealed a vertical translation at the C6-C7 level (roughly 11 mm) and bilateral facet joint diastases which are highly unstable injuries. A two-stage combined anterior and posterior fixation operation was performed. First, an anterior cervical discectomy and fusion with autologous graft and plate fixation, and then a posterior approach with lateral mass screw fixation was performed. Disruption of the anterior longitudinal ligament, annulus fibrosis, facet capsules, and severe strain of ligamentum flavum was noted intraoperatively. He had no early and late complications within 2 years of follow-up.

The cervical spine is the most common site of spine fractures in patients with motor vehicle accidents. Subaxial cervical spine injuries constitute approximately two-thirds of all cervical fractures [1]. According to AOSpine subaxial cervical spine injury classification, three basic morphologic categories have been described (Types A, B, and C). “Type A” injuries include compression fractures of the vertebral body with the intact tension band. “Type B” injuries constitute a failure of the posterior or anterior tension band through distraction while maintaining the alignment of the spinal axis. “Type C” are those injuries with displacement or translation of one vertebral body relative to another in any direction; anterior, posterior, lateral translation, or vertical distraction [2].  Cervical vertical translational injuries are rare with a high mortality rate. Previously, only two cases of cervical vertical translational injury have been reported. Wu et al. reported the first case in 2014. A 42-years-old man with C4-C5 vertical cervical distraction following blunt trauma due to a falling billboard [3]. The second case, reported in 2019, was a 49-years old man with C5-C6 vertical distraction injury after his dreadlocks had been caught in a drill press and his head spun around [4]. Both patients were unresponsive on admission and died shortly thereafter. Hereby, we report a 41-years-old man with a C6-C7 vertical translational injury that survived and underwent a combined anterior-posterior cervical fixation.

Our patient was a 41 years old man who was brought to the hospital by the emergency medical services following a road traffic accident. On admission, he was on a backboard with the cervical spine immobilized and primary traction applied due to a right lower extremity fracture. He was completely conscious (GCS: 15/15) with his vital signs being stable. The neurological examination was unremarkable. Brain and cervical CT scans were requested. The brain CT scan had no pathologic findings. The cervical CT scan revealed a vertical translation and increased disc space at the C6-C7 level (about 11 mm) and bilateral facet joint diastases (Figure 1). Cervical Magnetic resonance imaging (MRI) with Short tau inversion recovery (STIR) sequence was requested, which showed suspicious disruption of the anterior longitudinal ligament, annulus fibrosis, and facet capsules (Figure 2). His overall subaxial injury classification and severity scale (SLIC) score was six (3 for morphology + 0 for intact neurological status + 2 for disrupted discoligamentous complex). Since cervical translational injuries are highly unstable, a two-stage combined anterior and posterior fixation operation was planned. First, an anterior cervical discectomy and fusion with plate fixation were performed. Intraoperatively, the cervical spine was unstable at the C6-C7 level with disruption of the anterior longitudinal ligament and annulus fibrosis. Three days later, the cervical spine was further stabilized with a posterior approach. A posterior cervical spine fixation with C6 lateral mass screws and C7 pedicular screws was performed (Figure 3). Disruption of the facet capsules and severe strain of the ligamentum flavum was observed. 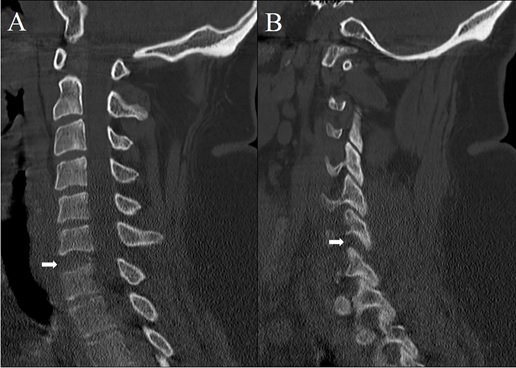 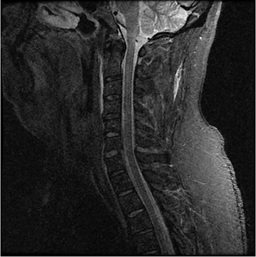 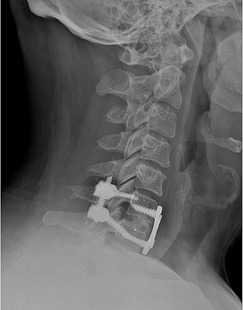 Subaxial cervical spine injuries are classified into three basic morphologic categories (Types A, B, and C). According to Vaccaro et al., [2], type C “includes injuries with displacement or translation of one vertebral body relative to another in any direction” with resultant anterior, posterior, lateral or vertical displacement. Type C injuries are usually characterized by unilateral or bilateral perched or dislocated facet joints, vertebral body subluxation/translation or rotation and posterior ligamentous complex injuries. Injuries with distraction of the anterior and posterior vertebral elements, as in our case, are extremely rare and would also be classified as a translational Type C injury.

Type C injuries are the result of severe torsional and shear forces, as in high-speed motor vehicle accidents (car-turnover in our case). They are highly unstable injuries due to the disruption of all three vertebral columns (disruption of the anterior longitudinal ligament, annulus fibrosis, facet capsules and severe strain of the ligamentum flavum in our case) and are frequently associated with vertebral fractures. Depending on the severity of the injury, they are associated with high morbidity and mortality rates, and the odds of surviving intact are quite low.

To date, in cases handful including ours, cervical vertical translational injury has been reported. The cases were severely injured with spinal cord injury or died shortly after admission. A 42-years-old man with C4-C5 vertical cervical distraction following blunt trauma due to a falling billboard, a 49-year-old male whose dreadlocks were caught in a drill press, spinning his head around with a resultant degloving and distraction injury, and a 71-year-old lady with incomplete spinal cord injury following a motor vehicle accident have been reported (Table 1) [3-5].

Instability is the primary indication for surgery in patients with traumatic subaxial cervical spine injuries [6]. Complete discussion of translation cervical injuries is beyond the scope of this paper and the interested reader is referred to excellent reviews on the subject [5, 6]. To date, no clinical study has addressed the management of this rare subtype. Our patient has been followed for two years with no early or late complications. A comprehensive PubMed search matched only a few cases with catastrophic outcomes [3-5].

Since vertical translational injuries are highly unstable with disruption of all three Denis vertebral columns, in those who survive this catastrophic type of injury, a single anterior or posterior approach would not provide sufficient stability to the cervical spine, and a combined anterior-posterior fixation seems a reasonable and necessary option.

Ethics approval and consent to participate: The manuscript received the approval of the ethics committee of the institution following the guidelines of the Helsinki declaration. The patient and his family members gave their signed consent for the publication.

Authors' contributions: All authors participated in the same way in the design, bibliographic search and writing of the manuscript.