Acute appendicitis is one of the most common causes of abdominal pain in patients referring to the emergency department, and appendectomy is one of the most commonly used emergency medical surgeries worldwide [1-3]. This disease is caused by intratubular obstruction, accumulation of fecal matter, lymphoid hyperplasia, ingestion of foreign objects, parasites and tumors. Appendicitis occurs less in children compared with adults, but its complications are more prevalent in children [4, 5].

Despite the advances in imaging technology, the hallmark of acute appendicitis is still based on patient biography and careful examination. Nevertheless, in addition to clinical examinations, the use of imaging can be very helpful in the correct diagnosis and reduction of the risk of progression of the disease and reduce the negative appendectomy rate [10]. In some studies, ultrasound, CT scan and MRI are used to increase the accuracy of diagnosis, and in some cases it is said to improve prognosis. However, the common use of them has not yet been proven [9]. Studies have shown that the use of ultrasound and CT scan before surgery can reduce the negative appendectomy rate and increase the accuracy of diagnosis [13-15]. However, some studies did not indicate increase in the diagnosis of negative appendectomy rate and the reduction of complications [15, 16]. The noteworthy point is that the use of low-risk methods for children is very important [9].

Ultrasound is an easy and inexpensive method with high precision for diagnosis of internal defects and is recommended for the evaluation of acute appendicitis. Diagnostic criteria of appendicitis in ultrasound are wall thickness of more than 6 mm, luminal dilatation and presence of mass in R.L.Q or fecalith. Many studies have been conducted on the use of ultrasound to confirm or reject acute appendicitis in suspected patients, but its accuracy is still unclear [14, 16]. An ultrasound of the appendix may be helpful even in patients with abnormal signs, including children and the elderly whose diagnosis is often delayed [14, 16]. Although the diagnostic accuracy depends on the operator, it seems that auxiliary diagnosis with ultrasound can be considered as a low-risk diagnostic method with high sensitivity [17, 18].

However, there are always contradictory opinions in studies, and there are no supplementary studies to confirm or reject this issue. Therefore, the aim of this study was to evaluate the sensitivity and specificity of ultrasound to detect acute appendicitis in children in order to reduce the negative appendectomy rate.

In this study, the ultrasound findings of the samples were evaluated at the time of diagnosis along with the patient's procedure description and the pathology report of the patients. The Ethics Committee approval of Shiraz University of Medical Sciences was obtained for this study. Ultrasound findings, findings during surgery, pathologic findings in the archives of medical records and radiology, and the laboratory of Shahid Motahari Hospital of Marvdasht. Positive pathologic report indicates any pathological evidence of inflammation in the studied tissue, which is categorized into seven groups according to the following criteria:

Abdominal ultrasound was performed using the graded compression technique with a 5.0-MHz linear array transducer. Positive ultrasound results for appendicitis was defined as the presence of an enlarged non-compressible appendix with an outer wall diameter greater than 6 mm, the presence of a complex mass, or the presence of an appendicolith. And the absence of ultrasound evidence was considered as a normal appendix. In the patients' procedure description, based on the evidence provided by the surgeon, any macroscopic evidence of inflammation was considered as appendicitis. The ultrasound data were correlated with surgical and pathological findings. After extraction, these data were recorded in a checklist for data collection and further analysis.

Sampling was done randomly. Sample size was calculated based on α = 0.9, p=0.05 and d: 0.04. After collected of information, results were evaluated by statistical package for social sciences (SPSS Inc., Chicago, Illinois, USA) for Windows, version 18.0. Descriptive data were collected from the frequency distribution table, central indexes, distribution and percentages. Continuous quantitative data were compared between the two groups using the independent t-test and Chi-Square test were used to compare the discrete data between the groups. In addition, the correlations between variables were performed and 0.05 was considered as the significance level.

This cross-sectional study was performed on 230 children aged 5 to 15 years with clinical diagnosis of acute appendicitis. Of these children, 121 (52.6%) were girls and 109 (47.4%) were boys. The mean age of the samples was 11.44 ± 2.90 years. The results showed that there was no significant difference between the studied samples in terms of age and gender (Table 1).

Table 1. The baseline characteristics of the patients with acute appendicitis in the current study.

Table 2. The results of the ultrasound, procedure description and pathological report of the patients with acute appendicitis in the current study.

The results showed that in this study, the true positive rate of ultrasound diagnosis was 87 relatives to pathology report, the false positive diagnosis rate was 25, the true negative rate was 55 and the false negative rate was 63. The correlation between the ultrasound detection and in acute appendicitis showed R2 of 0.048 (r=0.225). The best cutoff for sonography detection, for measurement of outer wall to outer wall diameter was >6 mm with a specificity 58%, a sensitivity of 68%, and a zone under the curve of 0.853 (CI 95% 0.788-0.917). In addition, the positive and negative predictive value of ultrasound for diagnosis of acute appendicitis was calculated to be 77% and 46%, respectively (Figure 1). 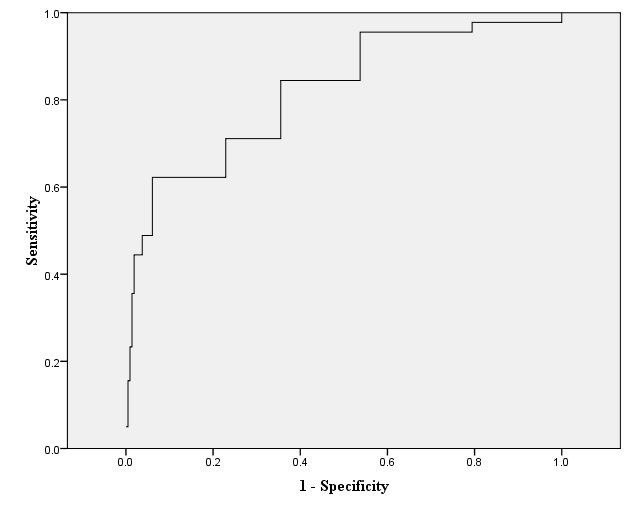 Acute appendicitis is one of the most common causes of abdominal pain and one of the most common causes of emergency surgery worldwide [1]. In most cases, the diagnosis is based on clinical records and clinical examinations, most notably with pain in the central abdominal region, which then moves toward the right iliac fossa [4, 5]. However, appendicitis occasionally occurs with an atypical manifestation. Therefore, it leads to a delay in diagnosis or misdiagnosis. According to studies, the unnecessary laparotomy rate for acute appendicitis is about 20-25%. This rate even reaches 35-45% in women of childbearing age, due to pelvic organ diseases in women and complications of pregnancy in this group [19]. Management of patients with clinical suspicion of acute appendicitis include the decision to operate the patient or not to operate the patient. Therefore, any type of examination that will improve the accuracy of the diagnosis will be helpful [20].

The goal of imaging in diagnosing acute appendicitis is to increase the diagnostic efficiency, along with lowering the cost and risk for the patient [10]. Some studies have suggested that, in cases where appendicitis is difficult to diagnose based on clinical symptoms, graded compression ultrasound is very helpful and the negative appendectomy rate is reduced [13-15].

However, in a study by Marusch et al. that was performed on 3924 suspected acute appendicitis patients, the results showed low consistency of ultrasound findings with pathologic reports: in 68.2% of cases whose acute appendicitis was detected by pathologist, ultrasound was not able to detect signs of inflammation. In this study, ultrasound sensitivity was reported 21.5% [27]. In addition, according to various studies, the sensitivity of diagnosis of acute appendicitis by ultrasound was 78 to 96%, with a specificity of 85 to 98%. Some studies reported that ultrasound examination in patients suspected of acute appendicitis reduced the incidence of unnecessary appendectomy by up to 7% and reduced the 6-hour delay of surgical operation by 2%. However, the quality of the results was highly dependent on the skill and the accuracy of the person who performed the ultrasound. Therefore, one of its disadvantages is its dependence on the individual who causes the difference in the results of various studies [13-16, 24-26].

Therefore, these findings suggest that ultrasound can be used to detect acute appendicitis in patients using appropriate devices and experienced professionals.

In conclusion, ultrasound can be used in children with clinical diagnosis or suspicion of acute appendicitis according to patient's condition. Although the accuracy of the diagnosis is dependent on the operator, it seems that it can be considered as a low-risk diagnostic method with high sensitivity. It also seems that using this method can play an effective role in reducing negative appendectomy rate. Therefore, the use of auxiliary techniques in ultrasound would increase the sensitivity and specificity in the diagnosis of acute appendicitis.

Conﬂicts of Interest: The author(s) indicated no conﬂicts of interest.