Objective: To investigate the success rate (technical precision) of ultrasound-guided lumbar transforaminal epidural steroid injection, which was validated by conventional fluoroscopic technique.Methods: A total of 20 patients with unilateral single-level lumbar foraminal disc protrusion causing radiculopathy were enrolled. Using transforming route, the needle location was determined by an axial (transvers) view of the ultrasound with fluoroscopic confirmation. We determined the needle placement accuracy of ultrasound- guided lumbar transforaminal injections approach. Results: The accuracy of ultrasound-guided interventions was 90% as confirmed by fluoroscopy. There were 2 failed cases at the L4-L5 level in the US-guided. The success rate in L5-S1 level was 100%, in L4-L5 level was 80% and in L3-L4 level was 100%. No complications were noted.Conclusion: Ultrasound-guided lumbar transforaminal epidural injections are accurate and feasible in clinical setting with an accuracy of 90% and no complications.

Low back pain and radiculopathy are among the most common diseases, and lumbar transforaminal epidural injection (TFEI), is one of the frequently used approaches for pain control and management of these diseases [1]. However, risks and severe adverse effects, such as paraplegia, quadriplegia, and cerebellar infarction, may be inevitable [2-6]. Complications may result from mechanical injury to the spine due to direct needle insertion, radiculomedullary arteries, and accidental intra-arterial injection of corticosteroid particles which may result in arterial embolism [7,8]. In order to provide anatomic precision and accuracy and also to minimize the associated risks, lumbar TFEI is normally performed under the guide of fluoroscopy or computed tomography [9-13] which make it the standard method for lumbar TFEI [1,14,15].

Fluoroscopy is most commonly imaging guide which is used in interventional spine procedures4 and is frequently performed to confirm the location of epidural needle. Radiation exposure is the major concern associated with obtaining fluoroscopic images which can be diminished using proper shields. Although fluoroscopy provide accurate real-time and continuous images, but this increases the overall exposure time, which puts both physician and patient at the risk of radiation exposure during the procedure.

The use of ultrasound (US) to perform injections for chronic pain has significantly increased in the past decade [16]. This increase is attributed to its multiple advantages over other imaging modalities including ease of performance, absence of ionizing radiation, better visualization of soft tissue (i.e., muscle, ligament) and blood vessels, real time visualization of needle advancement and, at times, the ability to observe the spread of injectate [3]. By using ultrasound, the need for use of contrast agents which can be associated with allergic reactions and renal damage is reduced. It can be performed portable, and is cost effective. However, several concerns such as accuracy and precision, reliability and patient safety should be addressed. To the best of our knowledge, only one study has been conducted in cadavers to evaluate accuracy and feasibility of US-guided lumbar TFEI.31 In this study, we investigated the accuracy (technical precision) of ultrasound guided lumbar transforaminal epidural injection, which was confirmed by conventional fluoroscopic technique.

This non-randomized clinical feasibility study was performed on 20 patients in a tertiary health care center during November and December 2017. Study population were all patients with unilateral single-level lumbar foraminal disc protrusion causing radiculopathy referring to department of pain whose diagnosis were previously confirmed by MRI and were candidate to undergo lumbar transforaminal epidural steroid injections. Study protocol was reviewed and approved by the institutional review board of Shahid Beheshti University of Medical Sciences (Tehran, Iran), and the hospital ethics committee. Patients were informed about the study procedure and informed consent was signed by all of them prior to the study. Written informed consent to publish the details was also obtained from the participant or parent/guardian. Inclusion criteria were age ≥18 years, ASA class I-II, and single level foraminal disc protrusion at either levels of L3-L4, L4-L5 or L5-S1. Patients with local or systemic infections; spinal stenosis, central disc herniation with axial pain, herniated degenerative disc, spinal deformity, vertebral fracture, inflammatory spondylopathy, duration of symptoms for more than six months, contraindication of lumbar surgery, failure to respond to traditional treatments (physical therapy, anti-inflammatories, or analgesics); history of lumbar spine surgery or previous epidural injection; opioid abuse, hyperextension pain, pregnancy (regarding female patients) neoplastic diseases, neurological defects, coagulopathy; apparent mental disorders; corticosteroid or contrast agent allergies were excluded from the study.

For all patients, standard monitoring (noninvasive blood pressure, pulse oximetry and electrocardiography) was applied upon arrival to the operating room. Procedural sedation was achieved using 1mg/ml of intravenous midazolam and patients were placed in a prone position. After sterilization and preparation of the site, the skin was anesthetized by subcutaneous injection of 3mL 1% lidocaine. A 22-gauge, 3.5 inch, Quincke-tipped spinal needle was used for all injections. The needle location was determined by an axial (transvers) view of ultrasound (Figure 1). In the lateral view and in-plane approach, the needle was placed under the pedicle on the ventral foramen between the vertebrae and in the anterior-posterior view, the needle was just placed under the middle of the corresponding pedicle. The needle was then pushed forward in the pathologic foramen under the guide of ultrasound. Once the needle was in position, and after negative aspiration for cerebrospinal fluid or blood, 1 mL of contrast dye (OMNIPAQUE ™, GE Healthcare, UK) was injected in the most medially visible shadow of the vertebral body and epidurogram results were recorded in the fluoroscope for evaluation of the contrast distribution pattern. During injection, an ultrasound image was taken to determine the distribution of the contrast dye in the posterior and lateral anterior aspect, which was confirmed by conventional fluoroscopic technique. The distribution of contrast dye was them evaluated (Figures 2 and 3). After validation of the correct placement of the needle, 2 ml of bupivacaine 2% mixed with 2 ml of dexamethasone 4 mg/ml was injected. In case of failure, repositioning of the needle was done by the guide of fluoroscopy. Any complications were noted. 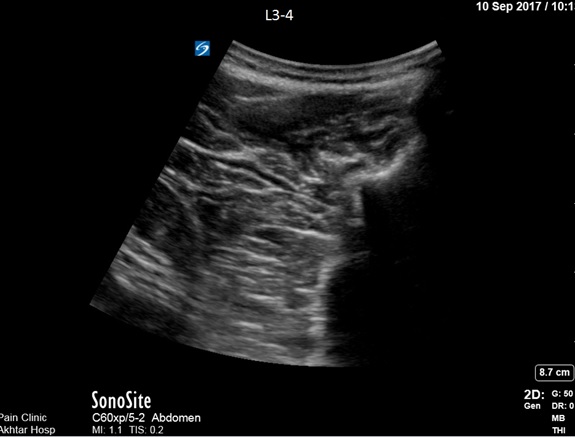 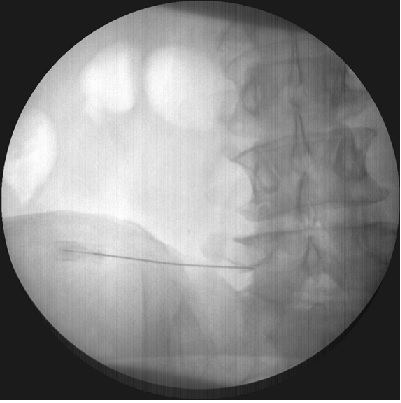 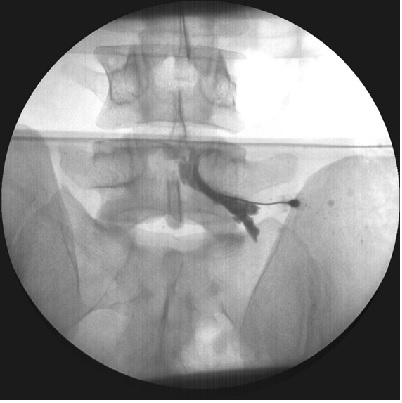 The main outcome of the study was to evaluate the accuracy of ultrasound in needle placement which was defined as the correct needle placement under the guide of ultrasound in the foraminal area. Specifically, accuracy of the spinal segment identification and pattern of radiopaque contrast spread were evaluated. Images were reported by two physicians who were not aware of each other's reports. In case of disagreement upon an image, that participant was excluded from the study. 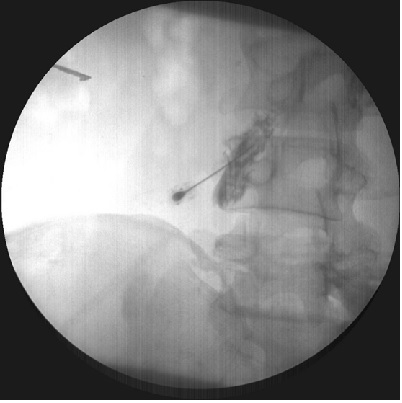 Interventional pain managements play a significant role in the treatment of different painful conditions and Image-guided interventional procedures have arisen as an alternative for management of back pain [17,18]. Lumbar TFEI is associated with minimal risk of dural puncture and better efficacy on pain relief, compared to posterior median and paramedian injection approaches [15, 19-21]. Transforaminal injections are performed under the guide of fluoroscopy/CT/MRI [22,23]. Though sonographic imaging has been revealed to be reliable and accurate in needle placement for TF approaches.

In another study, it has been reported that in lumbosacral selective nerve root block by ultrasound guidance, the accuracy of needle-tip localization was 80% [28]. For rapid visualization of the target position, the needle is guided toward the target structure within a few seconds under real-time, safe and controlled conditions. Therefore, a rapid US-guided injection is not surprising. The US-guided lumbar TFEI is a complicated technique. Due to the high acoustic impedance of bone, and visualization interruption due to bony artifacts, the anatomic landmarks of the lumbar region are poorly determined by US-guidance [29].

In this study, we used an in-plane approach in which the needles were advanced strictly parallel to the long axis of the transducer to keep them along with the echoes. In-plane approach provides real-time monitoring of the inserted needle along its entire length. In fact, the needle appears as a single distinct line-shaped echo pattern, which is different with only a few dot-like reflections when other techniques are used. Nonetheless, precise and accurate management of the transducer is compulsory to get the best visualization of the complete needle. Other studies have reported several benefits of sonography as a useful adjunct during various forms of injection applications such as: imaging of individual anatomic parts, real-time needle guidance, visualization of the spread of local anesthetics, minimal risk of complications, dose reduction of local anesthetics, and shortening of onset time. In our study, ultrasound guidance was accurate and reliable in correct needle placement for lumbar TFEI. Moreover, it was an affordable and safe technique for approaching the lumbar TFEI using ultrasound. Several benefits of using ultrasound guidance as an adjunct technique during different forms of injection applications have been previously reported, including feasibility, repeatability, real-time needle advancement, imaging of the individual anatomic parts, reduction of dose of drug injection, reduction of the risk of complications and visualization of the spread of agent, soft tissues, nerves and blood vessels [15, 30-33].

In conclusion, ultrasound-guided lumbar transforaminal epidural injections are accurate and feasible in clinical setting with advantages in delineating anatomy and lack of ionizing radiation.

Conflict of Interest: The author reports no financial/non-financial conflicts of interest regarding this work.