Bonsai is a synthetic cannabinoid (SC) substance which can cause lung toxicity with chronic use. However, there are few case reports in literature related to bonsai-induced intracerebral hemorrhage in literature. A 25-year-old man presented at the Emergency Room (ER) with dyspnea, hemoptysis and agitation subsequent to bonsai use. He became unconscious in ER and was then intubated and admitted to the intensive care unit (ICU). The cranial computed tomography (CT) scan was non-specific and a thoracic CT scan revealed consolidation and the appearance of “ground-glass” in the lung, and therefore, development of diffuse alveolar hemorrhage was considered. The patient recovered consciousness on the second day of hospitalization and was extubated. During follow-up, he lost consciousness once again and on the cranial CT images, hemorrhage areas located in the left frontal and right posterior parietal regions were observed. Nevertheless, no surgical intervention was considered. The patient recovered consciousness three weeks after the second intubation and was transferred to the psychiatry clinic. In patients with synthetic cannabinoid substance abuse, life-threatening intracranial complications in the early and/or late phase should be kept in mind in addition to respiratory and systemic complications in the acute phase.

Abuse and addiction of synthetic cannabinoid (SC) substances, known in different countries as “Spice”, “K2”, “Kronic”, “Bonsai”, “Jamaica”, has been increasing worldwide and has also become a serious social and health issue [1]. Psychomimetic symptoms have seen in the acute phase during the use of SC, while chronic use has been associated with many serious problems (e.g. psychiatric, neurological pulmonary, endocrinological and cardiovascular complications) and no specific treatment for SC intoxication has been established in literature other than supportive treatment [2-4]. The case is here presented of a patient with intracranial hemorrhage and alveolar hemorrhage due to the use of bonsai.

The patient became unconsciousness after admission to the ER (Glasgow Coma Scale (GCS) score 4/15), so was intubated immediately. At that time, the brain computed tomography (CT) scan was seen to be normal (Figure 1). The patient was then admitted to ICU. The laboratory test results in ICU were as follows:  pH=7.21, PCO2=48 mmHg, PO2=44 mmHg, HCO3=17 mEq/L, BE=-8.6 mmol/L, and SpO2=71% in arterial blood gas examination, and blood glucose=149 gr/L, BUN=148 mg/dL, creatinine=5.6 mg/dL, and potassium=7.1 mmol/L. Emergency hemodialysis was applied after introducing an internal jugular vein catheter. The abdominal ultrasound was normal. Due to bleeding through the endotracheal tube, it was thought that alveolar hemorrhage had developed in the patient. Bilateral infiltration areas were seen on the lung X-ray and thoracic CT revealed bilateral pleural effusion and bilateral consolidation and areas of “ground-glass appearance”, more prominent on the right side, mostly involving peripheral-subpleural areas and including air bronchograms (Figure 2).  In addition, gram (-) bacteria was colonized in bronchoalveolar lavage sample culture. A triple antibiotherapy regimen was initiated, consisting of 400 mg teicoplanin once a day (Targocid, Gruppo Lepetit S.p.A., Italy), 1000 mg meropenem trihydrate twice a day (Meronem, AstraZeneca, UK) and 750 mg levofloxacin once a day (Tavanic, Sanofi Aventis, Turkey). When the patient regained consciousness (GCS score 15/15) two days later and the blood gas levels returned to normal intervals and hemodynamic stability was obtained, he was gradually extubated and oral feeding and mobilization was initiated. However, on the fourth day after admission, the patient became unconscious once again and arterial blood PaO2 was 40 mmHg and PCO2 was 85 mmHg and he was re-intubated. The brain CT scan revealed bilateral vasogenic edema in the cerebellar and cerebral hemispheres (Figure 3) and treatment of intravenous mannitol 20% (Neofleks, Eba Drug, Turkey) and phenytoin sodium (Epanutin, Pfizer, Turkey) was initiated. One week later, the brain CT and brain magnetic resonance (MR) scan (Figure 4) showed hematomas involving the ventricles in the existing left frontal and right posterior parietal hypoxic/ischemic areas. The neurosurgery consultant did not consider performing any surgical intervention to the patient. Three weeks after the second intubation, the patient regained consciousness and was gradually re-extubated. Self-mobilization was achieved two weeks after the extubation (Glasgow Outcome Scale score=5). It was observed that the previously detected infiltration areas on the chest radiography were markedly resolved and the intracranial hemorrhage (ICH), vasogenic edema, and hypoxic/ischemic areas previously detected on the brain CT had greatly improved (Figure 5). Based on these findings, the patient was discharged from the hospital with a recommendation for psychiatric consultation 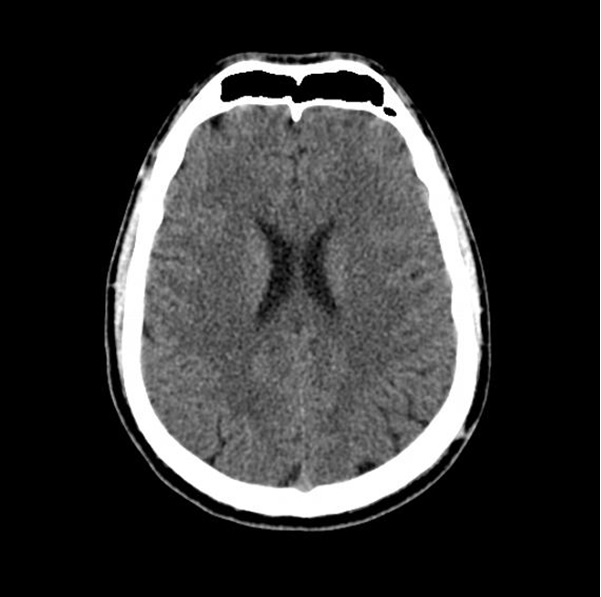 Fig. 2. Bilateralareas of infiltration are seen on the chest radiography taken because of the history of hemoptysis (2A). Thoracic computed tomography (CT) showing bilateral pleural effusion and consolidation areas including air bronchograms involving mostly peripheral-subpleural parts, more prominently in the right side and “ground-glass appearance” (2B, 2C). . 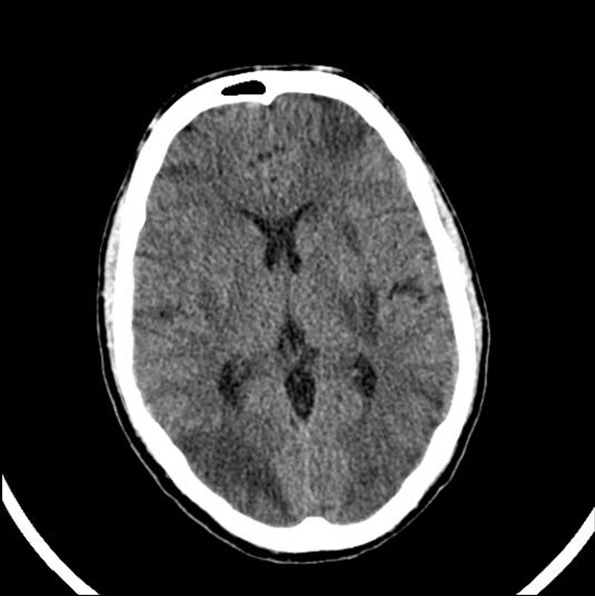 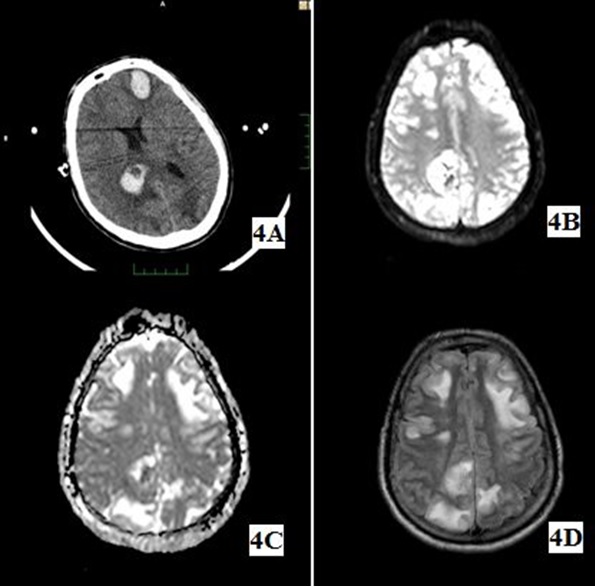 Fig. 5. A plain chest radiography obtained two weeks after extubation showing that the previously seen areas of infiltration were markedly diminished (5A) and cranial computed tomography showing that the areas of intracranial hemorrhage and vasogenic edema and hypoxic /ischemic areas were significantly improved (5B). 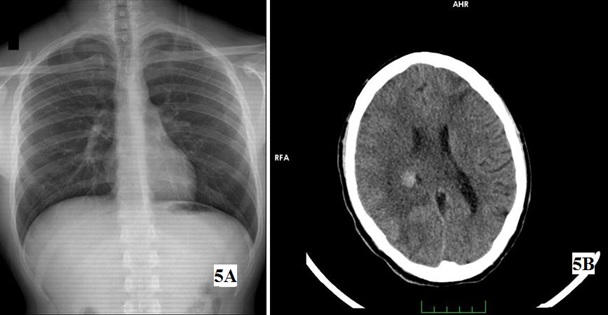 Synthetic cannabinoid agents can cause cerebral stroke, vasculitis, vasospasm, atrial fibrillation, tachycardia, tachyarrhythmia, xerostomia, diaphoresis, and mydriasis through direct sympathomimetic effects (Table 1) [5, 6]. However, the risk of intracranial hemorrhage due to SC substance abuse has not been completely identified in literature and it has been argued that these agents can cause acute ischemic stroke rather than ICH [7- 9]. Acute ICH related to SC substance abuse has been shown in only a few case reports in literature (Table 2) [10]. In the current case, although cranial MR images could not be taken in the early phase, cranial CT images on admission to the ER, which revealed no cerebral infarction or ICH, suggested that the unconsciousness of the patient had developed secondary to the toxicity of the bonsai rather than stroke. However, CT and MR images taken upon the re-development of unconsciousness in the late phase (approximately 4 days after the hospital admission of the patient) revealed bilateral vasogenic edema in the left frontal and right posterior parietal regions. These radiological images suggested that stroke had developed in the patient and this stroke was related to the SC agent abuse. One week later, brain CT and brain magnetic resonance (MR) scan showed hematomas involving the ventricles in the existing left frontal and right posterior parietal hypoxic/ischemic areas. These images suggested that intracerebral hemorrhage in that state might be related with hemorrhagic infarct secondary to ischemic stroke rather than coagulopathy secondary to the gram (-) bacterial infection which was already being treated with triple antibiotherapy regimen. All these findings suggested that this stroke developed secondary to SC substance abuse as discussed above.

Table 1. Most common clinical findings related to the synthetic cannabinoid exposures according to the Hoyte et al. [5].

It has been demonstrated in current literature that diffuse alveolar hemorrhage (DAH) syndrome characterized by pulmonary hemorrhage, hemoptysis, respiratory distress and bilateral parenchymal consolidation may also develop secondary to the use of heroin, cocaine, and various cannabinoids [11]. In the present case, the development of dyspnea and hemoptysis following the SC substance abuse, the presence of supportive findings of hypoxia in the arterial blood gas analysis, the presence of bilateral pleural effusion and consolidation areas including air bronchograms involving mostly peripheral-subpleural parts, more prominently in the right side and the “ground-glass appearance” on thoracic CT images, and the presence of bleeding from the endotracheal tube supported the diagnosis of DAH secondary to SC agent toxicity.

In most cases, symptomatic and supportive treatment is recommended in the algorithms for the treatment of SC abuse-induced toxicity [4]. In the current case, symptomatic and supportive treatment was applied and the SC agent was expected to be eliminated from the patient’s body. When the patient became unconsciousness and hypoxic, he was intubated and followed up under mechanical ventilation. Subsequently, the patient underwent hemodialysis due to impaired renal functions. Moreover, bronchoalveolar mechanical cleansing and broad-spectrum antibiotherapy were initiated in addition to the respiratory support for DAH. Although no surgical intervention was performed for intracerebral hemorrhage, it was attempted to prevent possibly life-threatening complications which might develop subsequent to the hemorrhage with anti-edema and antiepileptic treatment.

In conclusion, the current case report showed that symptomatic and supportive treatment can be life-saving management in cases of intoxication following SC abuse. In addition, it should be kept in mind that respiratory and systemic complications can be seen commonly in the acute phase, whereas intracranial complications such as stroke and intracranial hemorrhage could onset in the early or late phases of intoxication. Therefore, it can be strongly recommended that patients are monitored closely for both systemic and intracranial complications during treatment in ICU.