Ileus is a very rare complication of methamphetamine (MET) intoxication. We herein report a 15-year-old non-addict girl who ingested about 5 gr of MET. She suffered from bowel obstruction manifestations. She was treated by intravenous metoclopramide and erythromycin. On next morning, she became restlessness with tachycardia and sweeting that was treated by intravenous diazepam. Abdominal-pelvic computerized tomography (CT) scan confirmed generalize dilatation in small intestine and more prominent in colon with no ischemia or mechanical obstruction. It also showed some hyperdense collections in ascending colon, sigmoid and rectum. MET was detected in her urine. On the third day, the bowel obstruction signs resolved. On fourth day, the prokinetic drugs were discontinued and whole bowel irrigation by polyethylene-glycol was performed. She passed the drug packages, and was discharged in well condition on fifth day. MET intoxication can induce ileus, specially, in the higher doses of MET and physicians should mention this rare MET presentation.

Methamphetamine (MET) is a psycho-neuro stimulant drug that is abused frequently on the entire world. It is estimated that 15–16 million worldwide users abuse MET, which is more than total abuse of heroin and cocaine [1]. A survey on 2014 reported that 0.5% of Americans above 12 years old experienced MET in last month [2]. So the MET overdose is a common problem in emergency rooms. MET overdose presents with altered mental state, agitation, acute psychosis, dilated pupils, tachycardia, tachypnea, dyspnea, hypertension, shivering, chest pain and hyperpyrexia; leading  to organ damage, seizures or coma  [3]. Other complications of MET intoxication includes: rhabdomyolysis, cardiac toxicity, pulmonary edema, pulmonary congestion, cerebrovascular hemorrhage and hyperpyrexia [4].

The most common gastrointestinal complications of MET abuse or intoxication is Mouth–MET secondary to dry mouth and mandibular muscle spasms [4]. Paralytic ileus is very rare complication of MET intoxication; however, it can be dangerous. We previously reported MET induced ileus (MII) in animal pilot studies as a poster presentation [5]. Currently, we report MII in a young girl, that was treated by prokinetic and supplementary treatments.

A 15-year-old non-addict girl was referred to Imam-Reza toxicology center from the secondary care hospital, due to ingestion of some packets containing about 5 gr of MET. Her purpose was not clear, whether she was a body packer or a body stuffer.  Her parents took her to hospital because of complaining about abdominal pain, nausea, vomiting, constipation and obstipation about 12 hours after ingestion. The physicians found general ileus on their primary evaluation. At the time of admission, she was alert with normal vital signs however she suffered from general dull abdominal pain, nausea and anorexia. On physical examination, she had generalized abdominal tenderness without rebound. Her bowel sounds were decreased, (silent abdomen) and her rectum was empty on digital rectal examination. The abdominal plain radiography showed generalize dilatation in small intestine and colon (Figure 1). However, she had normal serum electrolyte (Table 1). Physicians considered a general ileus, therefore she was treated by intravenous metoclopramide 10 mg every 8 hours and erythromycin 400 mg every 6 hours. Her vital signs were monitored and she was treated by regular intravenous fluid and electrolytes.  A 16 F nasogastric tube was inserted and fixed. On next morning, she became restless (Richmond Agitation-Sedation Scale= +2) with stereotyped motor activity, tachycardia (Heart rate=120/min) and sweeting. She received intravenously diazepam 10 mg in addition to other conservational therapies. Abdominal-pelvic computed tomography (CT) scan confirmed generalize dilatation in small intestine and more prominent in colon without any evidences of ischemia and mechanical obstruction, and also showed some hyperdense collections in ascending colon, sigmoid and rectum (Figure 2). Her urine drug screen tests positive for MET. On the third day of admission, she had normal level of consciousness without evidences of restlessness with normal vital signs. Her reduced bowel sound reached to normal and she had gas passing and her abdominal pain resolved. So oral nutrition was started and the prokinetic drugs were discontinued. On fourth day, whole bowel irrigation by polyethylene glycol was performed. And she passed the drug packages. She was discharged in well condition on fifth day with normal abdomen-pelvic CT scan. Unfortunately, we could not follow up her. 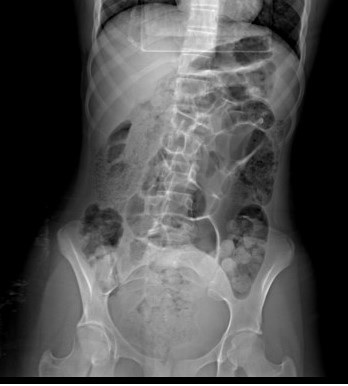 Fig. 2. Abdominopelvic computed tomography (CT) scan of a girl with Methamphetamine induced ileus demonstrating the dilatation of the small intestine and the colon. The arrows show foreign body (body stuffer or packer). 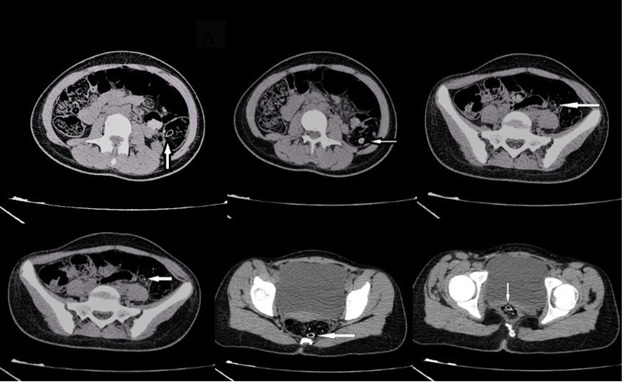 MET is a stimulator, that increases the effect of monoamines; dopamine, noradrenalin and serotonin; by different mechanisms. MET has similar chemical structure to monoamines, so it can bind and stimulate receptors of these compound directly [4]. Due to this structural similarity, MET bounds to membrane and vesicular transporters of monoamines. MET also redistributes the monoamines, especially dopamine, from vesicles to cytosolic cell partition by changing the Ph. These effects of MET are dose dependent. At low doses, it releases monoamines by interfering with the membrane transporters. On moderate doses it interacts with the neurotransmitter vesicle transporters and releases reserved monoamines into cytoplasm. On higher doses MET diffuses into cytoplasm and vesicles and change their Ph into alkaline and releases monoamines due to changes in ph [6, 7]. Monoamines metabolism is also attenuated by MET [6, 8]. Also there are some evidence about blocking the reuptake of catecholamines by MET. MET releases noradrenaline two and 60 fold greater than dopamine and serotonin respectively [6]. The most peripheral effects of MET is induced by rapid and sustained release of catecholamine and stimulation of α and β adrenergic receptors [6, 9]. MET induces peripheral vasoconstriction via alpha-1 receptor stimulation that results in hypertension and visceral ischemia [9] . There are some case reports of MET-inducted acute mesenteric ischemia [10, 11].

Carlson et al reported the first case of MII in human. They reported a young person, who abused MET, with acute chest pain and tachycardia. Gradually his chest pain resolved and he suffered from anorexia and focal right lower quadrant abdominal pain with tenderness. His bowel sounds were diminished. On abdominal X-ray and CT scan the small intestine, appendix, and colon distended and filed by air, without any evidences of ischemia. He received conservative treatment and was discharge without any complication [9]. They did not remark that they used any prokinetic drugs. Our case is the second case of human MII.

Pei and Zhang also reported a dog with MET intoxication and MII. It was a female dog that ingested unknown amounts of MET and referred to veterinary with agitation, tachycardia, hyperthermia, seizures, hypertension, bloody diarrhea, disseminated intravascular coagulation (DIC), leukocytosis and mild hypoglycemia. The blood and urine concentrations of MET were higher than therapeutic, 0.32 μg/mL and 2.35 μg/mL respectively. It was conservatively treated  and discharge on 6th day [12]. Moshiri et al. also published an animal report with MII on conference abstract book. They reported two rats treated by high doses of MET (50 and 45 mg/kg) in dose finding study. They presented hyperthermia, high degree of stereotypic motions and tremor led to death 4.5-5 hours later. The all hallow parts of gastrointestinal tracts of the rats were distended without evidences of bowel ischemia and they pushed out of from abdominal cavity on laparotomy [5].

The mechanism of MII is not obviously defined. There are some suggestion about direct effect of MET on the gastrointestinal tracts (GIT) after discovery of the cocaine and amphetamine regulated transcript (CART) receptor in some parts of  the GIT [13]. Intraventricular administration of CART peptide decreased the colonic transit time of conscious rats [13]. However Carlson et al mentioned that MII could not be resulted by CART receptors stimulation [9]. Majority of CART receptors in GIT were mainly located in the circular layer and they regulate gastric and intestinal motility [14]. They attenuated the relaxing of Nitric Oxide in colon, but not in ileum [14] and on both radiographies; current and previous, human case reports; the large intestine dilatation patterns were dominant [9]. So it seems that stimulation of CART receptors in addition of catecholamine release are mechanisms of MII.

The MII is very rare presentation of MET abuse and this is the second human report. It seems that MII happen in higher doses of MET because our human case ingested 5 grams of  MET,   however Carlson DO et al did not report the amount of MET that their case abused [9], but both animal cases also received high dose of MET which was mentioned in reports [5, 12] and all of these cases presented severe clinical manifestations of MET.

In conclusion, MET intoxication can induce ileus, specially, in the higher doses of MET and physicians should mention this rare MET presentation.