Trauma, especially traumatic injuries due to car accidents are one of the causes of maternal and fetal mortality and morbidity during pregnancy. Fetus brain injuries are usually caused fetus death. We herein report a pregnant woman in 28 weeks of gestation. The fetus was found to be normal during in-hospital. At birth, the female neonate demonstrated developmental delay and neurological deficits (hypotonicity). Neuroimaging after birth revealed extreme dilatation of lateral ventricles, hypoplasia and aplasia of the brain. In 4 months, she had multiple morbidities including developmental delay, hypotonia, blindness, oropharyngeal dysphagia and simple partial seizure. Motor and response to stimulation was normal. Appropriate seatbelt usage can protect the fetus from sustaining severe intracranial injuries.

Trauma is the main non-obstetric etiology of mortality in pregnant woman [1]. Motor-vehicle accidents still are the main causes of trauma-associated injuries in pregnancy followed by falls and violence [2]. Maternal traumaric injuries are most common during the third trimster leading to fetal skull fractures and intraparanchymal hemorrhages [3]. However, still there less concordance between severity of maternal trauma and computerized tomography (CT) of the fetal brain [3]. However, it is well established that significant intracranial pathologies such as subdural hematoma (SDH) is associated with severe maternal abdominal trauma [4]. Fetal trauma in pregnant women who have suffered from blunt trauma is very rare but if the damage reach to fetus head, it is usually fatal [5]. Also about penetrating traumas, however is accompanied with low mother mortality but usually the fetus mortality is high [6].
The survival of fetus that are suffered from head injuries depends on type of injury, intrauterine asphyxia, maturity and postnatal period. Followed to fetus brain trauma, if fetus survive, with high risk, it likely to develop encephalopathy, cerebral palsy, development delay [7]. There is a paucity of the literature on the subject which makes the evidence-based approach more difficult. We herein report a case of 28th week fetus brain injury secondary to inappropriate use of seatbelt during a motor-vehicle accident.

A primigravid pregnant woman at 28 weeks of gestation was brought to the hospital due to car-accident. The accident had occurred at suburban road, and two cars had collided at high speed from the front. The pregnant woman was sitting at the front seat next to the driver using the seatbelt while the belt was not suitable for pregnancy. During the transport of the mother to the hospital to prevent of supine hypotension syndrome, a roll was placed under the backboard to allow for 15-degree rotation to left. At Hospital, the mother’s vital signs were normal and no obvious injury was recorded in the mother. All the physical examinations and laboratory tests were unremarkable. Before accident, the fetus was normal in all of screening surveys. In fetus survey that conducted immediately on admission, the fetal heart rate (FHR) showed no changes and fetus movements and fetus amniotic liquid was normal and there was no evidence of bleeding behind the placenta. The survey was repeated 3, 6 and 24 hours later and had normal results, so the decision was taken to continue the pregnancy. The mother was discharged in good condition with caution sign and symptoms.
After discharge, she was checked in outpatient clinic routinely. In the last ultrasound that was performed at 39 weeks of gestation, fetal brain lateral ventricles’ diameter in the trigon area was 25mm and the remaining thickness of cerebral hemispheres parenchyma was 4mm which indicated severe brain atrophy. In 39 weeks of gestation, term female infant was born with Apgar score in 1 and 5 minutes, being recorded as 8. Her birth weight was 2800 grams and head circumference was 30 cm. In appearance, hypotonicity and microcephaly was significant. Brain CT-scan (Figure 1) and magnetic resonance imaging (MRI) (Figure 2) was done after birth that extreme dilatation of lateral ventricles, hypoplasia and aplasia of the brain were observed. Because of skull deformity and neurological deficits, the patient was transferred to neurosurgical service and was assessed constantly. After 10 days on in-hospital evaluation and assessment the patient was discharged and was assessed in an outpatient basis. In 4 months, she had multiple morbidities including developmental delay, hypotonia, blindness, oropharyngeal dysphagia and simple partial seizure. Motor and response to stimulation was normal. According to the patient's condition, phenobarbital elixir was administered with partial improvement.  After one year that we followed up the patient, there was no new sign in the patient, but the patient still had a developmental delay, hypotonia and dysphagia but patient's seizures were controlled. 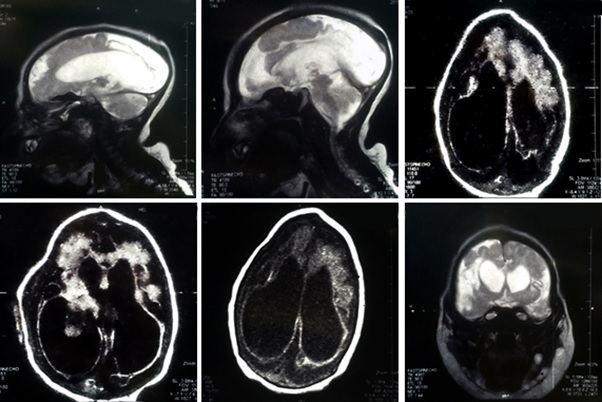 Most traumatic injuries to the fetus occurs due to car accidents, suicide, violence and war [7]. Car accidents is the most common form of trauma in pregnant women which occur in 2.8% of pregnant women in the USA [8]. After introduction of the airbags, the injury to the fetal head has increased probably because of the different mechanism of injury. Its recommended that the pregnant women use seatbelt appropriately during pregnancy which is associated with reduced burden of maternal and fetal morbidity and mortality [9].
Of note the position of the lap belt should be placed below the prominence of the pregnant abdomen, with the shoulder harness off the side of the uterus, between the breasts and over the midline of the clavicle. The mother should sit at least 10 inches from the steering wheel [10]. It is also important that during transport of pregnant woman, after 20 weeks of gestation the supine position should be avoided due to compression of the inferior vena cava [11].
FHR monitoring after trauma is a suitable method for checking the fetus health and FHR changes usually occur prior to fetal brain damage [12]. Placental abruption occurring in 5-50% of maternal trauma [13]. On ultrasound, abruption can be missed in up to 50% of cases. Most abruptions occur within 2-6 hours after injury, and almost all within the first 24 hours post injury [14]. In previous studies, CT scan was stated the best way to assess the fetus brain injury after trauma, and has advised if there is a doubt for fetus brain injury, CT scan must do at the first time because damages due to radiation is much less than the damages caused by the delay in diagnosis. Even though a CT can be performed relatively safely, so MRI would be much safer and more detailed [12,15].
In conclusion, fetal traumatic brain injury can result in severe brain atrophy, intraparenchymal and intravetricular hemorrhages, subdural hematoma and skull fractures leading to neonatal developmental delay, hypotonia, blindness, oropharyngeal dysphagia and seizures. Appropriate seatbelt usage can protect the fetus from sustaining severe intracranial injuries.

Conflict of Interest: There isn’t any conflict of interest.