Handlebar Hernia with Triple Herniation and Perforation: A Case Report and Literature Review

Traumatic abdominal wall hernia is an infrequent entity after blunt trauma abdomen, which is a fairly common entity [1]. Herniation through abdominal wall usually occurs after injury with the seat belt, motor cycle, bicycle handle bar, fall from height, sports injury or attack by animal, however a herniation of bowel through three defects after sustaining blunt injury with the handle of a bicycle with associated perforation is a rarest of rare event [2, 3]. Most of the handle bar hernias are not associated with major intra-abdominal injuries due to low magnitude of a force at a focal point, which was contrary to the situation in our case. We present here a case of a boy, who sustained blunt injury to the abdomen with bicycle handlebar leading to triple herniation and perforation of the small bowel and hematoma of the mesentery. Demanding prompt intervention so that to prevent morbidity and mortality.

A14-year-old boy was transferred to the emergency room of our center due to multiple blunt trauma 5 hours before. He had fallen from bicycle and sustained injury to the lower abdomen on the left side. On examinations there were abrasions over left elbow and left knee. He also had two episodes of vomiting. On examination he was afebrile his pulse rate was 96/minute, blood pressure of 110/70 mmHg and respiratory rate of 18/minute. In abdominal examination, he had a circular handle mark of the bicycle in the left iliac fossa with a visible bulge in the surrounding region (Figure 1), which was tender to touch. The other sections of the abdominal examination were unremarkable without any signs of peritonitis. Plain abdominal, chest radiographs and focused assessment with sonography for trauma (FAST) were normal and patient underwent a contrast enhanced computed tomography of the abdomen, which was suspicious of traumatic abdominal wall hernia (Figure 2). The patient was managed in accordance to the advanced trauma life support (ATLS) protocol and after resuscitation with isotonic fluids, nasogastric decompression, analgesics and antibiotics the patient was taken for exploration, which revealed perforated viable small bowel protruding through a defect in the abdominal wall (Figure 3). On further exploration after taking control of the perforation, the same perforated bowel was seen protruding through a defect in omentum under the abdominal wall defect. After manually reducing this, there was another defect visible in the mesentery of the small bowel, from which the same perforated bowel loops had herniated. There was a small hematoma in the small intestine mesentery and small amount of blood in the peritoneal cavity. The perforated small bowel loop might have been lying posterior to the mesentery, omentum and abdominal wall respectively at the time of impact of injury by the bicycle handle bar leading to this very unusual triple herniation. The mesenteric defect, omental defect and the abdominal wall defects were repaired. The postoperative period was uneventful without any surgical site infection and patient was discharged on the seventh post-operative day. On follow up the patient was doing well without any evidence of recurrence after 6 months. 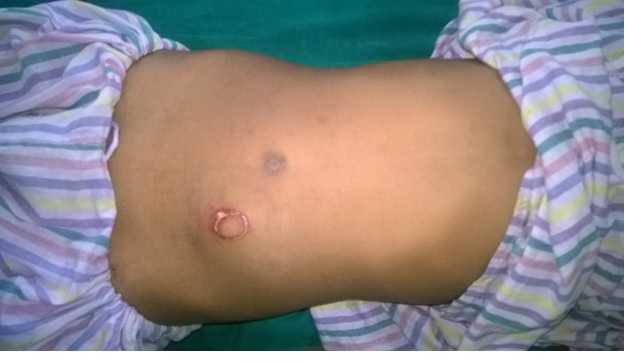 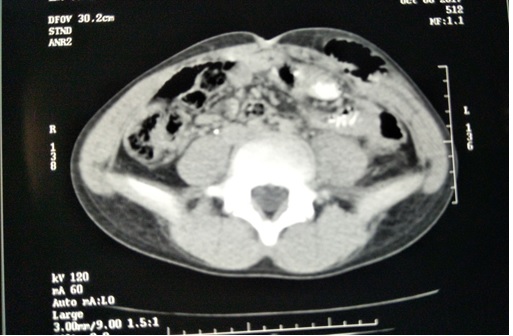 Selby was the first to describe traumatic abdominal wall hernia in 1906 more than a century ago and Dimyan et al in 1980 described the association of traumatic abdominal wall hernia with handlebar injury and used the term hernia of the handlebar [1,2]. A traumatic abdominal wall hernia is defined as a herniation of viscera through the disruption of muscles and fascia after a trauma without necessarily breaching the overlying skin and no signs of previous hernia at the same site [3]. Until 2013 around 250 cases of traumatic abdominal wall were reported in the medical literature worldwide in the form of case reports and case series and around 15% of these were due to handlebar injury [4]. Recent review of published data on handlebar hernia in the medical literature reveals around 80 cases of handlebar hernia till date (Table 1). In India out of these less than ten cases have been reported in the medical literature [5,6]. The incidence of blunt trauma abdomen is quite high, however incidence of traumatic abdominal wall hernia is quite low in comparison to that and is reported as less than 1%. The incidence of the abdominal viscera being involved ranges from 25 to 70%, moreover in handlebar hernia the incidence of associated injuries reduces to less than ten percent [7]. Most of the cases are seen in males as they have more risk of injury due to increased activity.
These hernias after blunt trauma abdomen are assumed to be a result of sudden severe tangential focal impact in addition to increased intraabdominal pressure leading to breach in the musculature and fascia after motor vehicle accident, seat belt injury, motor cycle, bicycle handle bar, fall from height, sports trauma (kick or ball), occupational injury (axe, shovel, wheelbarrow) or attack by animal [8]. The traumatic abdominal wall hernia usually has an intact overlying skin, which can masquerade an underlying defect and can be missed at the time of presentation sometimes presenting at a later stage or can prove to be fatal. Commonly the traumatic abdominal wall hernia due to handlebar injury are found in the infraumbilical region usually lateral to rectus muscle and a very few in the supraumbilical region [9].
Possibility of traumatic abdominal wall hernia should be kept in all patients following blunt trauma abdomen. Handlebar hernia is usually considered low impact injuries with fewer chances of associated intraabdominal injuries, contrary to our case. Clinically there will be a tender bulge in the abdominal wall or more ominous signs like abrasion, tattooing or imprints known as London sign on the site of injury in conjunction with swelling. Presentation can be early if bulge or swelling is very obvious and diagnosis is easily established or delayed when small defects post handlebar trauma or similar impact may be missed and mistaken as contusion or soft tissue edema, which may present later as hernia. Abdominal pain is variable and sometimes only localized to the site of trauma in the absence of other visceral injury. Rarely presence of mesenteric injury may lead to vascular insufficiency predisposing the bowel to gangrene or perforation. In some patient’s associated diaphragmatic hernia are also seen. Sometimes the diagnosis of hernia is established at laparotomy or during peritoneal lavage for other visceral injuries [10]. List of differentials is not long and commonly they are confused with rectus sheath hematoma or inguinal hernia and are difficult to clinically identify in obese.
USG can be used to establish the diagnosis of traumatic abdominal wall hernia but is less sensitive than CT scan and is mostly user dependent. Contrast enhanced CT scan is a valuable investigation allowing the assessment of the abdominal wall injury, hernia and its content and the detection of other associated intra-abdominal injuries [11]. Dennis et al., [12] has postulated a grading system with the help of CT for abdominal wall injury. Grade I is subcutaneous tissue contusion, Grade II hematoma, Grade III single muscle disruption, Grade IV complete muscle disruption, Grade V complete muscle disruption with herniation and Grade VI open herniation. In our case contrast enhanced CT was done but somehow it missed the perforation and other two defects.
Till date there are no established protocols or guidelines for the management of traumatic abdominal wall hernia. Basic issues are that does all traumatic wall hernia demand a repair, if yes than controversial dilemma lies between early or delayed management and further concern is about the type of repair to be undertaken primary or mesh reinforcement. Both early and delayed management carries its benefits and harms. In cases of associated intra-abdominal injury or hemodynamic instability prompt repair is advocated without any doubt. Early surgery may prevent incarceration and strangulation of the contents which establishes as the time elapses and edema ensues. On the other hand, benefit of delayed surgery is better planning, less recurrence and infection rate. The incision is planned according to the diagnosis; if isolated abdominal wall hernia without any intra-abdominal injury is present incision can be placed directly over the traumatic bulge so that the defect can be dealt with otherwise a midline incision is preferred. The defect is primarily repaired with nonabsorbable suture or with mesh depending on the size and contamination [9,13,14]. To sum up management in traumatic abdominal wall hernia is individualized and based on size of defect, severity of trauma, associated injuries, hemodynamic status of the patient and radiological findings.

Blunt trauma abdomen is a very common entity and the possibility of traumatic abdominal wall hernia should be borne in mind in these patients.  Handle bar hernia a variety of traumatic abdominal wall hernia is difficult to diagnose and one should have high index of suspicion when approaching such a case to plan prompt management and avoid inadvertent morbidity and mortality. Management of these patients, though controversial, should be individualized depending on the size, severity, associated injuries, hemodynamic stability and radiological findings.

Conflict of Interest: The authors declare that there is no conflict of interest regarding the publication of this paper.