Intracerebral Hemorrhage Secondary to Scorpion Toxin in the Northwest of Argentina; A Case Report

Scorpionism is the clinical picture resulting from the inoculation of scorpion venom. It is considered a major public health problem, especially in countries with low resources and tropical or subtropical climate. Poisoning can be fatal especially in the first hours due to respiratory and / or cardiovascular collapse. The compromise of the central nervous system (CNS) is infrequent but varied and complex, being able to be triggered due to multiple and different neurotoxic properties of the toxin. We report here a severe case of poisoning with cardiovascular and neurological compromise in an endemic region of Argentina. After cardiorespiratory stabilization, neurological deterioration is detected secondary to intracerebral hemorrhage that required surgery and multimodal neuromonitoring. The outcome was fatal due to multiple neurological and systemic complications. Scorpion sting poisoning is a true neurologic and neurosurgical life-threatening emergency.

The scorpion sting is a life-threatening and endemic medical toxicological emergency in certain regions of third world such as Africa, India and Latin America [1, 2]. In the province of Catamarca, Argentina, seven species have been recorded, two of the genus Tityus (trivitatus and confluens) whose venom is potentially lethal to humans [3]. (Figure 1). The toxin released by the arachnid mainly stimulates the autonomic nervous system (sympathetic and parasympathetic) causing a variety of clinical presentations including myocarditis, cardiogenic and / or distributive shock, acute respiratory distress syndrome (ARDS), disseminated intravascular coagulation (DIC), acute renal dysfunction and compromise of the central nervous system (CNS) between which include seizures, subarachnoid hemorrhage and ischemic stroke [4-6]. Intracerebral hemorrhage (ICH) is a rare clinical form of scorpion poisoning, so, this reason motivates us to present this clinical case.

A 69-year-old woman without medical history was bitten on the back of the left foot  by a scorpion of the genius Tityus trivitatus (Figure 1) Initially, she present mild local pain and erythematous reaction and was treated with dexamethasone, diphenhydramine and then she was transferred to our hospital. At emergency admission she was tachycardic (HR 157 bpm) in sinus rhythm, tachypneic (RR 42 bpm), hypertensive (187/97 mmHg), hypothermic (35.5ºC rectal temperature), sweaty, with increased respiratory secretions and excessive tearing and salivation. She showed progressive deterioration of consciousness state to coma (Glasgow 7 points: O1, V1, M5), localizing nociceptive stimuli in both arms and legs. Pupils remained equal and reactive. No meningeal irritation was detected. She was intubated, ventilated, oxygenated and resuscitated with isotonic fluids, corticosteroids and anti-scorpion polyvalent serum (4 units). Deep sedoanalgesia was started with remifentanil and propofol (RASS – 4) [7]. EKG showed sinus tachycardia with isolated monofocal ventricular extra systoles. X-ray of the chest was normal. 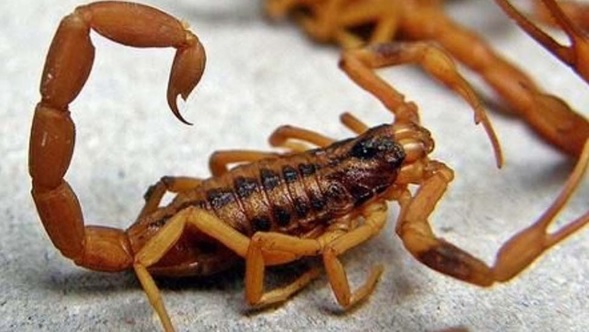 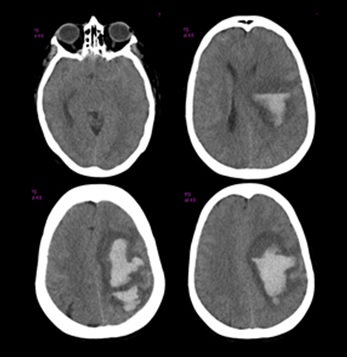 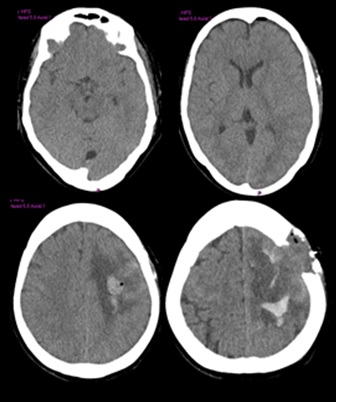 Scorpion poisoning is a potentially lethal entity [1-15]. The clinical manifestations are varied and can be life-threatening by severe compromise of cardiac, pulmonary, renal, coagulation and CNS function [1-15]. Cerebrovascular involvement occurs in approximately 8% of cases5. Previous analysis of the literature until 2013 (Pubmed) detected 23 cases; two thirds of which corresponded to ischemic stroke, while the remaining third was due to intracerebral hemorrhage5. Within the latter group (n = 8), the half of them (n = 4) were due to hemorrhages of the basal ganglia; while 2 corresponded to cortical and subcortical hematomas as the reported clinical case; 1 to intraventricular bleeding and 1 due to subarachnoid hemorrhage [5]. In Table 1, we summarized ICH reported cases.
The venom of the scorpion is produced in glands located in the distal portion of the tail. It is composed of various low molecular weights, water soluble polypeptides with enzymatic and pro-inflammatory properties, capable of activating coagulation cascade at different levels, whereby, the compound acquires toxic characteristics fundamentally for the myocardium, kidney, lung and CNS [3, 4, 14]. Its lethality lies in the fact that the poison binds to specific sites that modify ionic movements essential for the normal maintenance of cellular physiology [4, 15].

Toxins affect the ion permeability of excitable cells and four families of toxins have been described, all of that interact with voltage channels dependent, principally sodium, potassium, chloride and calcium [4, 14]. By acting on sodium (excitation) and potassium (blocking) channels, depolarization is prolonged, resulting in neuronal excitation, mainly the postsynaptic, postganglionic nerve terminals of the autonomic nervous system, causing the massive release of sympathetic (catecholamine) and parasympathetic (acetylcholine) mediators [4, 14]. Additionally, the toxin stimulates the release of cytokines, endothelin, neuropeptide Y, while activating the coagulation and complement cascade, which closes the vicious circle of neuronal damage [4, 14] (Figure 4). The mechanisms indicated, explain the reported case. Early recognition together with the therapy directed to advanced cardiorespiratory support, and neutralization of the toxin can contribute to reduce the mortality associated with scorpion poisoning. 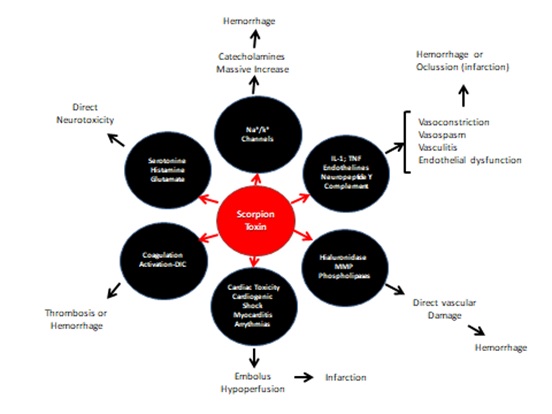 In conclusion, in endemic regions for toxic scorpion species always consider the possibility of central nervous system compromise, due to the neurotoxic characteristics of the toxin which can induce severe forms of hemorrhagic stroke.

Declaration of patient consent: The authors certify that they have obtained all appropriate patient consent forms. In the form the patient(s) has/have given his/her/their consent for his/her/their images and other clinical information to be reported in the journal. The patients understand that their names and initials will not be published and due efforts will be made to conceal their identity, but anonymity cannot be guaranteed.

Financial support and sponsorship: No.