Objective: To investigate the epidemiological aspects of all-cause injuries in Hamadan province during a 6-year period.Methods: We conducted a cross-sectional study on injured subjects admitted to private or governmental hospitals in Hamadan province during March 2009 to March 2015. The epidemiological characteristics were retrieved from a registry-based system including gender, residency, injury mechanism and date of injury occurrence, outcome of hospitalization (full recovery/disability/death).Results: Totally, 135,925 hospitalized injured cases were recorded. The majority of cases were male (72.6%) and were occurred in urban areas (60%), about 40% of patients were in 20-34 years’ age group, and the highest proportion (30.13%) of injuries occurred in summer. Logistic regression showed that the odds of disability vs. recovery was significantly higher in rural areas [Adjusted odds ratio (AOR) =3.42] and the odds of death vs. recovery was higher among male gender (AOR=1.46). In addition, comparing to the 0-4-year age-group, odds of death were significantly higher in middle aged and elderly victims. Conclusion: Our findings showed that middle age groups, male gender and urban area increase the odds of death. Injured males and old age subjects had the highest odds of death and out of residential area injuries were common cause of leading death injuries.

Road traffic accident (RTIs) are unexpected events which cause the unpleasant health-related outcomes such as deaths and disabilities. They are the most important concerns in public health in both high- and middle/low income countries [1]. Iran is a Middle East country with a high burden of RTIs [2, 3]. Leading death RTIs are considered as the second leading cause of death in Iran. In addition, RTIs are the first cause of years of life lost (YLL) with a proportion of 16% [4]. The epidemiological aspects of RTIs and their related-deaths are different in developed and developing countries due to some different socio-demographic and cultural factors which require specific approaches and strategies to planning in each region [5-7]. Previous studies conducted in Iran [8, 9] reported a declining trend in the RTIs-related mortality, other studies [10, 11] showed several important factors such as male gender, younger age, summer season, rural roads, and low educational level affecting on mortality, and disability due to RTIs. The results of one conducted study in Iran showed that 26% of injuries deaths are preventable [12].
Nowadays, accidents are considered as a pandemic problem not only on the road, but also at home, school, and sports fields, recreation centers, workshops, etc. [13, 14]. In Iran, 64 percent of children's injuries are due to domestic accidents [15]. Injuries are not inevitable; they can be prevented or controlled [13]. Despite a declining trend in the accident rates [8, 9], the burden of accidents during the past decade are still a major public health concern in Iran with a proportion of 76% among all causes of death [11]. Therefore, more epidemiological information about the characteristics of all-cause injuries may help policymakers to the development of better prevention strategies. This study aimed to investigate the epidemiological aspects of all-cause injuries in Hamadan province during a six-year period.

Study population
This cross sectional study was conducted on 135,925 injured cases admitted to private or governmental hospitals in Hamadan province, western Iran during March 2009 to March 2015.

Eligibility criteria
All of injured cases that were recorded their information to private and governmental hospitals in Hamadan province regardless of province of residence during mentioned time period were entered to the study.

Injury description and outcomes
Measurements/data collection
This national registration system designed by Center of Disease Control of the Ministry of Health is in Microsoft access program form and included variables of gender, location of accident (urban/rural), injury mechanism, date of accidents (season), and injury outcome (recovery/ disability/death). The related data were collected from a database designed to record trauma victims’ characteristics of accident victims in hospitals and outcomes were full recovery, disability and death. This information is collected by hospital staffs and periodically (the end of each season) transferred to deputy of health and through counties health centers. In Hamadan province, this information obtained from 26 hospitals of 9 covered counties (Asadabad, Bahar, Hamadan, Famenin, Kabudarahang, Malayer, Nahavand, Tuyserkan and Razan).

Table 1. Demographic characteristics of subjects under study during a 6-year period. 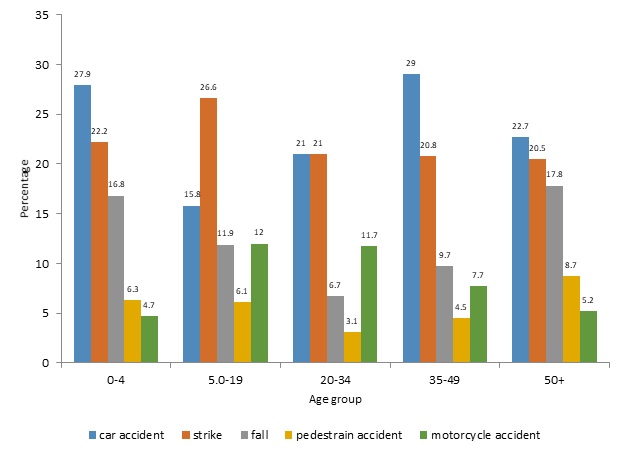 Fig. 1. Percentage of common causes of injury in Hamadan province by age group.

Regression analysis
The results from multinomial logistic regression with injury outcome (recovery/ disability/ death) regressed on gender, age group, accident location and season unadjusted and adjusted for covariates are presented in Table 2. We hypothesized that outcome (recovery/ disability/ death) are different according to demographic and related risk factors to accident in subjects. The odds of disability vs. recovery were significantly higher in rural compared urban areas (adjusted odds ratio (AOR) =3.42, 95% CI: 1.76, 6.65) and the odds of death vs. recovery were higher among male gender (AOR=1.46, 95% CI: 1.29, 1.67) and out of urban and rural compared urban areas (AOR= 1.6, 95% CI: 1.39, 1.86). Recovery were significantly higher for age group of 35-49 years (AOR= 1.35) and for more than 50 years of age (AOR= 2.69) compared to age group of 0-4 years.

a P. Value<0.05; bAdjusted for other variables in the model, OR: odds ratio

Through of this cross-sectional study, 135,925 traumas and accidents were enrolled to determine the important epidemiology aspects of accident occurrence in Hamadan province, during six years 2009-2015. Accidents occurred more among males, urban residents and patients aged 20-34 years. The odds of handicap due to incident were higher in rural areas compare to urban locations, also the odds of death in male, old ages, and in residential areas were higher. Our finding is consistent with other reports that demonstrated young age and male genders are more vulnerable to injuries in developing countries [11, 16]. Among the possible reasons for high incidence of accidents in these two groups can be mentioned to more presence of men and young people in daily activities.
According to our results, 60% of injuries occurred in urban areas. Consistent with our finding, Bakhshi et al. showed that the number of victims of injuries in urban areas were almost as twice as the rural residents [17]. Steadily increasing of motorcycles in the city streets can be rational explanation for this epidemic picture in Iran [18]. As well some part of this difference in frequency of accidents by accident location is due to greater number of urban population in Hamadan province (about 60% urbanization rate).
We also found that 31.5% of the total injuries occurred due to car and motorcycle accident. It is large proportion of all accidents. The important reasons for this can be educational, industrial and commercial development without the appropriate development in road construction [19-21]. In fact, production of automobiles in recent years without enough improvements in other components of injury prevention such as environmental and behavioral modifications can justify high burden of car and motorcycle accident in Iran. As well, in our study nearly half (44%) of the hospitalized cases occurred due to strike, and car accident, other important causes of injury were fall and motorcycle accident in younger age groups, 5-19 and 20-34 age gropes, strike was the leading cause of injury. In a study on home accidents in Iran was shown that burns, injuries and falls are the three leading of injury mechanism, respectively [22]. Another study was showed that 0 – 4 and ≥ 60 years’ age groups are the highest and lowest rate of injuries risk in Iran [23].
In this study multinomial logistic regression was used to determine of important predictors towards accident outcome (recovery/ disability/ death) through of independent variables including gender, age group, location of accident and season. The odds of disability due to injuries was higher in rural compared urban areas, and higher odds of death was observed in males compared to females. The difference in the injury mechanisms according injured gender and higher occurrence of injuries with more severity like traffic accidents in males can justify this increased risk in males. According to our finding, the odds of death was significantly higher in out of residential areas injuries compared in residential areas. Road traffic injuries are the leading cause of death by injury and the 3rd leading cause of all deaths in Iran [3]. High speed vehicles and severity of accidents in roads can justify this increased risk. The comparison result between age groups was showed that 35-49 years’ age group has a more risk to death compared to 5-19 years’ age groups. According to previous reports 69.7% of trauma brain injury was occurred in motorcycle riders [15]. The main reason for this high serious outcome is lack of use some protective devices such as helmet in motorcyclists’ derivers, some reasons that people do not wear helmets are feeling less likely crash in short distances by motorcyclists, scorching heat, and fear of stealing on leaving the motorcycle [24,25].
Some limitations should be mentioned in this study. First, this study is a cross-sectional study and potentially prone to selection and information bias [26]. Second, under reporting, due to not including victims with minor injuries that did not require hospital care to the study, can affect our finding. Third, due to not identified co-morbidities in victims we do not determine these effects on accident and side effects. Fourth, the predictor variables limited to four variables (age, gender, location, and season) other variables such as job, socioeconomic status, co-morbidities, car types (sedan or none sedan), the presence of airbag, car size and speed not included due to limitation on data.
In conclusion, injuries are an important health concern with high morbidity and mortality in Hamadan province. Our study confirmed results of other studies that reported middle aged groups, male gender and urban area exceed the risk of injuries. Also the risk of disability due to injuries were higher in rural, and risk of death were higher in males compare to females. Finding of this study is important to better explicate of epidemiology aspects of accidents in Hamadan province.