Objective: To estimate the summation of mortality rate and the contributing factors in patients with traumatic thoracolumbar spinal cord injuries (TLSCI).Methods: A systematic search of observational studies that evaluated the mortality associated with TLSCI in MEDLINE and EMBASE was conducted. The study quality was evaluated using a modified quality assessment tool previously designed for observational studies.Results: Twenty-four observational studies involving 11,205 patients were included, published between January 1, 1997, and February 6, 2016. Ten studies were of high quality, thirteen were of moderate quality, and one study was of low quality. Seventeen reports described risk factors for mortality and eleven of these studies used a multiple regression models to adjust for confounders.The reported mortality rate ranged from 0 to 37.7% overall and between 0 and 10.4% in-hospital. The sum of mortality for in-hospital, 6-month, and 12-month were 5.2%, 26.12%, 4.3%, respectively. The mortality at 7.7 years follow-up was 10.07% and for 14 years follow-up reports ranged from 13.47% to 21.46%. Associated data such as age at injury, male to female ratio, pre-existing comorbidities, concomitant injuries, duration of follow-up, and cause of death have been underreported in studies investigating the mortality rate after TLSCI.Conclusion: Currently no study has accurately assessed mortality in the thoracolumbar spine, while there is general agreement that traumatic thoracolumbar spinal cord injuries are important.

Introduction
Traumatic thoracolumbar spinal cord injury (TLSCI) is an important healthcare issue that could affects thousands of individuals annually worldwide. The mortality rate is one of the important indicators of economic and social burdens of a disease. Treatment outcomes can also be evaluated using the rate of mortality. Additionally, more accurate data such as in-hospital mortality may be indicators of health system quality and play a major role in management decision making. Although the age and cause of injury are not different in thoracolumbar and cervical levels, complications and mortality rates are higher in cervical spinal cord injuries than thoracolumbar levels [1-6]. Thoracolumbar vertebral fractures occur most frequently between the levels of T12 to L2 [7] and associated neurological deficits are found with 15 – 20% of all thoracolumbar injuries [8]. Cardiovascular, infectious, and respiratory disorders had a great role in the mortality of patients with TLSCI. However, advances in medical care have led to a lower rate of the mortality in the 21st century [9]. The mortality rate associated with TLSCI in different countries is an important subject. However, there is no comprehensive study to show the global picture of the mortality of TLSCI.
According to the literature, the level of the lesion, the neurological status (complete or incomplete injury), age, gender, joint injuries, comorbidities, and time from injury to treatment are all factors affecting mortality in patients with spinal cord injury (SCI) [10]. In current work, we attempted to evaluate and, to the extent possible, pool all homogenous studies to estimate the overall mortality rate and contributing factors in patients with TLSCI. To the best of the authors’ knowledge at the time of submission, this is the first systematic review that has explicitly evaluated mortality rate after thoracolumbar SCI.

Materials and Methods
Search strategy
A systematic review of patients with TLSCI was performed to define mortality rate and its contributing factors. The review and its analysis were carried out in accordance to Preferred Reporting Items for Systematic Reviews and Meta-Analyses (PRISMA) [11] and the search strategy was designed by a medical information specialist (Figure 1). The MEDLINE and EMBASE (via Ovid) databases were queried on February 6, 2016, without limitation for document type, or publication status. However, studies were excluded if not written in the English language or reported before 1997. Keywords were searched (Figure 1) as well as the review of the initial search results and citations of included articles. Because relevant outcome measures are not always mentioned in fields that may be queried for all reports, no specific issue term was used to augment the search results; instead, the outcomes were sought for after acquiring the full-text of the available results. The results of this query were then entered into Endnote X5 and sent to two independent reviewers. 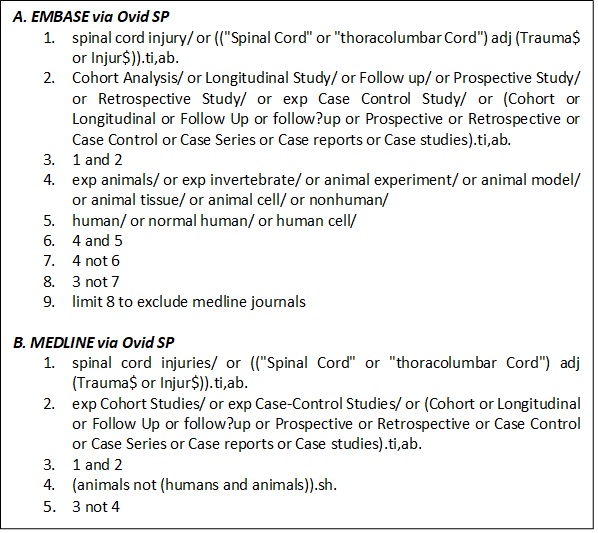 Inclusion and Exclusion criteria
The inclusion criteria were as follows: the study was conducted on patients with distinct, definite TLSCI as the main study group or sub-group; traumatic status was established; death was considered as an outcome, and the cohort consisted of at least 20 patients. Studies with age, gender, and functional limitations and those conducted on a particular population were excluded. Reports not written in the English language and those where only the abstract was available were excluded. Studies carried out on January 1, 1997, were excluded.

Data extraction
The titles, abstracts, and full-texts of available reports were checked by two independent reviewers against the criteria as mentioned earlier. Any disagreements on article selection were solved through discussion. Where the records were unclear or incompetent, attempts were made to contact the authors by email. There was only one response to our emails.
Two reviewers separately assessed the quality of the selected studies according to the Meta-analysis Of Observational Studies in Epidemiology (MOOSE) group [12], which was designed for observational studies and used in previous systematic reviews [13-16] (Table 1). The studies were categorized into quality levels according to the methodological quality score (Table 2).

Table 1. Criteria for Assessment of the Methodological Quality of Observational Studies.

Table 2. Criteria for Assessment of Quality of the Included Studies.

Two independent reviewers extracted data including the study type and duration, demographics, male to female ratio, mean age at the time of injury, and assessment period. Because any potentially confounding factors affecting mortality are peculiar to the particular study, these factors (comorbidities and coexisting injuries) were included, similar to previous systematic reviews [17, 18].
Reports examining the association between risk factors and mortality were found. Since the essential characteristics were not homogenous across all studies, a meta-analysis was not performed. However, the mean number of death for studies with similar follow-up period was calculated.

Results
The search strategy yielded 6796 records. After screening the titles and abstracts, 138 articles were selected for full-text assessment; 114 of these were excluded. After application of all inclusion and exclusion criteria, a total of 24 studies were selected for systematic review (Figure 2). The characteristics of the selected studies are shown in Table 3. The articles were published from January 1, 1997, to February 6, 2016.  The population sizes ranged from 22 subjects to 4042 patients. Eight studies were from North America (6 from the United States, two from Canada), one from Latin America (Brazil), three from Oceania (Australia), five from European countries, four from the African region, and three from Asian countries. Concomitant traumatic injuries and comorbidities were stated in just 8 and four reports, respectively; however, in all of these reports, these factors were described for the total study population and not for the thoracolumbar patients exclusively. 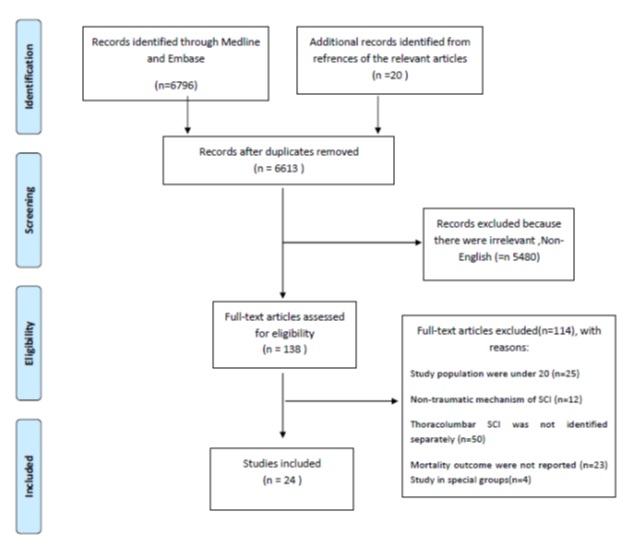 Fig. 2. Flowchart of Studies Excluded and Included for Systematic Review.

Table 3. Characteristics of the Selected Studies.

The quality of the studies is shown in Table 4. All studies had predefined patient inclusion criteria. In 13 studies, the contributing factors for mortality were analyzed. Also in 13 studies, mortality for patients with TLSCI was assessed according to age, gender, ASIA (American Spinal Injury Association) grade, Frankel grade, and level of thoracolumbar spine injury. In eight studies survival rate and four studies, life expectancy was reported as separate outcomes. In just one study, causes of mortality were reported separately for patients with TLSCI. According to methodological quality (Table 1), three studies had nine points, nine studies had eight points, two studies had seven points, eight studies had six points, one study had 5 points, and one study had four points. Therefore, ten studies were high-quality (41.6% of studies), 13 studies were moderate quality (54.2 %), and one study was low-quality (4.2%) (Table 4).

Demographic data
Although all studies reported male to female ratio (M/F), M/F was reported for the TLSCI subgroup specifically in just one study [19] while in the other studies M/F was presented for the SCI patients overall. Generally speaking, men were more often affected by SCI. In the study that specifically mentioned M/F in TLSCI patients, it was reported as 7.37 [19]. The mean age was reported in twelve studies and just one study [20] reported the mean age for the thoracolumbar subgroup (35.2 years). One study was performed only among the elderly population [21] and one study was in children [22].

Table 6. Mortality in Thoracolumbar Spinal Cord Injury according to the duration of follow-up.

Age and Gender
In 14 studies, the association of mortality and gender was assessed; there was no significant association except three studies [10, 27, 28]. In one of these studies [27], the female gender and in two studies [10, 28], the male gender were predominant. In the study by Varma et al., [10] gender was not significant by univariate analysis however after adjustment for confounders by multivariable logistic regression modeling, a 60 percent higher chance of death in males compared with females was seen (OR=1.6). In all studies, the association of higher age and mortality was assessed which showed a significant relationship in all except one [29]; this study compared patients less than 20 years old with older subjects.

The level of lesion and neurologic status
Severity of injury as complete or incomplete neurologic deficit or Frankel and ASIA classes was evaluated in 10 studies. Five studies reported completeness of neurologic deficit and the association with death. In all except one study 30, the association was significant. In this study, two groups of 61 and 30 patients were enrolled from Greece and Sudan, respectively; lack of significance may be due to the small sample populations. In the study by Hagen et al., [20], Patients with complete traumatic spinal cord injury had higher standardized mortality ratio (SMR) in comparison to incomplete injuries (4.23 vs. 1.25). This higher SMR was also true for spinal lesions at cervical and thoracolumbar level subgroups (3.07 vs. 1.13). In the study by Sabre et al., [24], the completeness of lesions was only related to mortality in the first two years after injury. In the other five studies, the severity was assessed by ASIA and Frankel Grades, and its association with mortality was reported. In these studies, the mortality rate was higher in those with Grade A neurological injury.

Associated injuries
Traumatic co-injuries were assessed in three studies [24, 25, 30] and in one study, a concomitant head injury was significant just within the first two years after
injury [24]. The association of treatment method with mortality was assessed in three
studies [24, 25, 30] and was significant in one [24]. In this study, the death rate in the first two years after injury was lower in those who underwent operations within the first six weeks after injury. The other risk factors are presented in Table 7.

We did not consider the data of Levy 1998 because of unknown period for mortality (13/67), the significant number of non-responder patients with SCI and discrepancy between information in the text and figure [19].

Acknowledgment and funding
The authors have no conflicts of interest to report. This paper was based on a thesis by Dr Maryam Aghasi, under the guidance of Professor Vafa Rahimi-Movaghar, a candidate for the degree of General Medicine (MD). The authors would like to thank Mrs. Bita Pourmand (Urology Research Center, Tehran University of Medical Sciences) for editing the manuscript and Professor of Epidemiology, Soheil Saadat, for his scientific comments. The author(s) disclosed receipt of the following financial support for the research, authorship, and/or publication of this article: This study was supported by AOSpine of Middle East (AOSME) and Sina Trauma and Surgery Research Center, Tehran University of Medical Sciences (Tehran, Iran).