Objective: To evaluate the lethal area 50 (LA50) and determinants of mortality in burn patients admitted to a single burn center.Methods: This retrospective cross-sectional study was conducted in a tertiary burn center affiliated with Shiraz University of Medical Sciences, Shiraz, Iran, during a 1-year period from 2015 to 2016. To determine prognostic factors in fatal burns, medical records of eligible burn patients were reviewed for demographic and clinical variables, as well as patient outcome. Also, LA50 was calculated using Probit analysis.Results: Overall 559 patients with the mean age of 27.2±23.65 years and including 343 (61.4%) males and 216 (38.6%) females were enrolled in this study. The average burn TBSA% was 31.38±24.41% (1-100%). Duration of hospital stay ranged from 1 to 67 days (15.11±10.64). With 93 expired patients, the mortality rate was calculated to be 16.6%. The total LA50 was 66.55% (58.4-79.3). Fire was the most common cause of burn injury.Conclusion: Compared to developed countries, in our burn center the LA50 and survival rate of burn patients are lower. This indicates an urgent need for prompt attention in order to improve current policies regarding this public health issue to reduce mortality.

Burn injuries are among top ranking common traumas worldwide that afflict the patients with persisting detrimental physical and psychosocial sequelae [1-4]. The lengthy recovery period and associated complications also impose negative psychological, social and financial impacts on family members of the victims [5,6]. In developed countries, survival rates over the past decades have drastically increased thanks to advances in management including fluid resuscitation, early nutritional supplementation, controlling infection and other comorbidities within a multidisciplinary team approach [7, 8]. Nonetheless, 90% of burn injuries occur in middle- and low-income countries [9], where besides the difficulty avoiding such incidents as a consequence of poverty and lack of proper safety education, the shortage of easily-accessible well-equipped facilities, skilled health-care personnel and financial resources hinder the delivery of satisfactory treatments and rehabilitation services for patients [10,11]. As a result, poor outcome and higher mortality follow. Each year in Iran, an estimated 100,000 burn patients seek medical attention with 6% requiring hospital admission [12]. Unfortunately, as much as around 9% of patients don’t survive [12]. Given the substantial magnitude of this public health issue, a full understanding of epidemiologic characteristics and factors influencing mortality is of great importance. Despite numerous community- and hospital-based regional reports, the determinants of mortality have seldom been addressed [13]. Also, it should be noted that mortality rate is specific to each center as it depends on the efficacy and quality of care. A reliable outcome measure tool which allows the comparison of quality of care in each center is the Lethal Area 50 (LA50) index, the extent of burn TBSA associated with 50% mortality, which has been utilized for a long time [14]. Following this concern, we conducted the present study in the tertiary referral burn centers of Shiraz, to obtain demographic and clinical data and to determine prognostic factors in fatal burns using the LA50 index.

Study Population
This retrospective cross-sectional study was conducted on burn patients admitted to Amiralmomenin burn center affiliated with Shiraz University of Medical Sciences (SUMS), Shiraz, Iran, during a 1-year period from 2015 to 2016.  We included all the patients who were consecutively admitted to our center during this period. Outpatients, repeat patients, incomplete medical records and cases with concurrent complications, such as trauma, who required transfer to other centers, were excluded. Data were gathered in a retrospective approach and the principles of confidentiality were ensured according to the Helsinki declaration of bioethics. The study protocol was approved by the institutional review board (IRB) and medical ethics committee of SUMS.

Study Protocol
Medical records of eligible burn patients were reviewed and the data was recorded in data gathering forms. Demographic (age, gender) and clinical variables including cause of burn (scald, flame, explosion, chemical materials, electricity, and direct contact with hot objects), percentage of burn size (TBSA), duration of hospital stay and outcome (discharge form hospital versus death) were recorded for each patient. Cause of the burn was determined regarding patients’ history. The size of burn injured area, reported as percentage of TBSA, is estimated based on the Lund and Browder chart [15] . 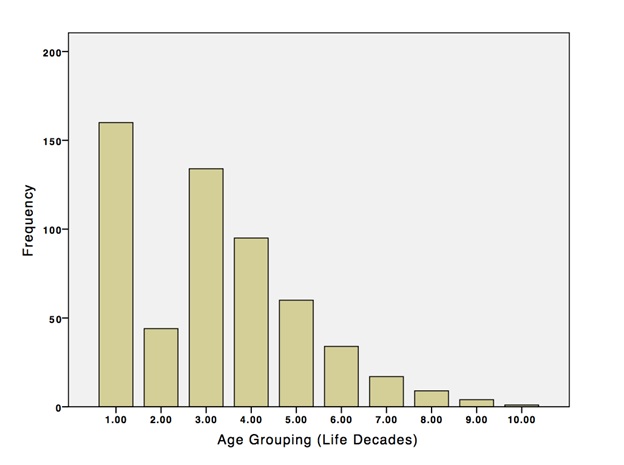 Fig. 1. Frequency of burn injuries in different aging groups based on life decades.

Table 1. The baseline characteristics of 559 burn patients admitted to our center during the study period. 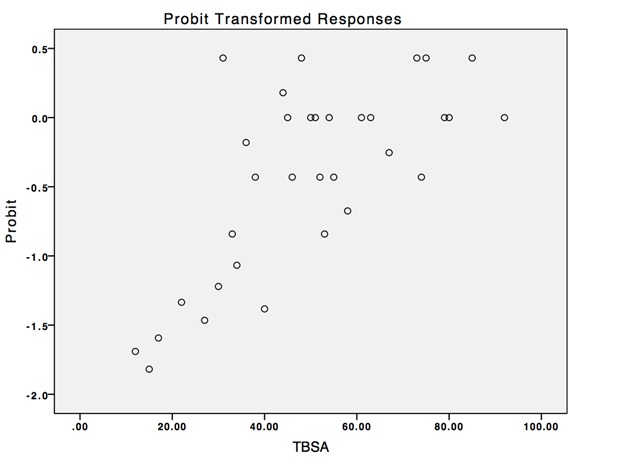 Fig. 2. Demonstration of the Probit analysis for 559 patients in our study with probability of survival plotted against TBSA% an index of burn size. This plot is used for calculation of LA50.

Table 2. The lethal area 50 (LA50) in 559 burn patients admitted to our center during the study period according to various variables.

Table 3. The determinants of mortality in a series of 559 burn patients admitted to our center during the study period based on the multivariate logistic regression model.

In this current study of investigation of LA50 and the determinants of mortality in a large referral center in south of Iran, our findings show that the majority of burn patients are young aged and predominantly men. Burns from direct fire flames are the most common incidents and approximately one third of TBSA is affected, which requires a two-week hospital stay on average. In our center, LA50 and mortality rate are 66.55% and 16.6%, respectively. Age and burn size were associated with mortality. Various influential factors on mortality of burn have been reported in previous studies, including older age, gender, inhalation injury, chronic diseases as well as greater burn size (TBSA) [16].  Reliable estimates of LA50 in Iran are scarce. A study by Aghakhani et al on more than 400 patients in the cold province of West Azerbaijan showed a slightly higher male dominance in both prevalence and burnt TBSA% [17]. Although LA50 was not calculated, it was reported that patients with over 40% TBSA had a mortality of 73.8% [17], conclusively, LA50 lied below 40%. In a similar study by Shahmiri et al in Tehran on 1200 patients, the total LA50 was 55.5% with significant differences between in age group above 60 years with second and third decades of life. Advanced age, female gender, inhalational injury and burn extension were independent risk factors of mortality [18]. In another study in the main tertiary referral hospital of Kermanshah on 540 patients with thermal injuries, LA50 was calculated to be 50.82%. Female gender, age and burn sized were main risk factors of mortality [16]. Data from Burn Registry Program of Iran in 2016, which were obtained from over 1700 inpatients burn cases, showed a male to female ratio of 1.75:1, a median age of 25 years and an overall mortality rate of 8.4%. LA50 was 62.31% and 72.52% for above and below 15 years, respectively. Likewise, to other studies, female gender, burn size, older age and inhalation injury were the responsible risk factors for mortality [19]. The results of a study by Erkani et al in Khuzestan province also showed that patients were young age and mostly men. Likewise, direct fire accidents were the main cause. The mean TBSA was slightly higher than our finding and was 38%. Also the mean hospital stage was 2 weeks [20]. In a more deprived province, the patients of a center in Zahedan were found to have a mean TBSA of around 50% and mortality of approximately 45%, which is very high. Also, more patients were men and the mean age was lower at 20 years [21]. The mean age of patients in Tehran were however much higher, at 33 years and petroleum products were the main cause of burn. TBSA was around 40% and the mortality rate was 33% [22]. Another study in Tehran also had compatible findings with men being more injured and a mean age of 33 years and flammable materials/liquids as the main cause. Female gender and TBSA were the strongest predictors of survival [23]. The rise in this index in the US form 40% during WWII [24] continued to increase over the next decades. In a large study on over 23000 burn patients in China from 1958 to 2004, LA50 values were significantly higher in the second half of this period. Age showed an influence on LA50, as patients in extreme of age; under 5 and above 60, had lower LA50 [25]. In a study in a major burn center in Beijing on 1974 burn patients the mean age of admission was 36  years and the mean TBSA of burn was 14.7 %, which is much lower that our results, similar to the mortality rate which was 2.8% [26]. The Birmingham Burn Centre study reported 4577 patients with a mean TBSA burn of 7.2% and a mean age of 22 years. Mortality rate and LA50 was shown to have improved compared to previous results of this ongoing study [27]. A systematic review of 76 studies, including more than 186,500 patients with severe burn injuries admitted to European hospitals showed that the annual incidence had a declining trend and that almost half of patients were children and adolescents. Mortality rate ranged from 1.4% to 18% and was decreasing in time. Risk factors for mortality were older age and a higher total percentage of burned surface area, as well as chronic diseases [28]. An overview of LA50 in studies published from 2007 to 2017, including burn data analysis from Iran, is demonstrated in Table 4. This study might have been limited by incomplete patients’ records that prevented the inclusion of a larger study population. Objective estimation of the probability of death due to burn injuries are complex. LA50 is a well-established index suitable for assessment of quality of care in burn patients and a good applicable measure for comparing various centers with each other and over time [29]. In conclusion, age and burn size determined by TBSA% was associated with mortality in our patients. Regarding the lower rate of LA50 in developed countries compare to burn centers in Iran, interpretation of such valuable data helps health system in detecting susceptible regions and patients, planning preventive programs and prioritizing the financial resources for high-risk patients to improve patient survival in an efficient manner. Screening regional centers of the country and continuous monitoring, helps distribute resources and perform interventions in most needed areas.