Efficacy and Safety of Morphine and Low Dose Ketamine for Pain Control of Patients with Long Bone Fractures: A Randomized, Double-Blind, Clinical Trial

Objective: To compare the effects of intravenous morphine and a low dose of ketamine on pain intensity of patients with traumatic fractures of the long bones.Methods: This randomized, controlled, double-blinded, clinical trial was conducted in the adult emergency department (ED) of Emam Khomeini hospital, a tertiary general hospital affiliated with Mazandaran University of Medical Sciences, in Northern Iran, during a 6-month period. Patients were randomly assigned to receive intravenous morphine (0.1 mg/kg) or low dose ketamine (0.5 mg/kg) for control of the pain in the emergency room. The pain intensity was checked by a nurse using the visual analogue scale (VAS) at 30, 60, 90, 120, 180 and 240, minutes after the intervention.Results: Overall we included a total number of 156 patients with mean age of 35.87±3.38 years. There were 111 (71.2%) men and 4 (28.8%) women among the patients. Patients were randomly assigned to receive intravenous morphine (n=78) or low dose ketamine (n=78). The pain intensity decreased significantly in both study groups after 240 minutes of intervention. However, there was no significant difference between the two study groups regarding the pain intensity at 30 (p=0.378), 60 (p=0.927), 90 (p=0.434), 120 (p=0.557), 180 (p=0.991) and 240 (p=0.829) minutes. The side effects were comparable while low dose ketamine was associated with higher need for rescue analgesic (p=0.036).   Conclusion: The results of the current study demonstrates that the intravenous low dose ketamine leads to successful pain control in patients with long bone fractures and the effects are comparable with intravenous morphine.The study is registered with the Iranian Registry for Clinical trials (www.irct.ir; IRCT2017041221480N6)

Long bone fractures, like tibial, femoral, and humeral fractures, are common traumatic injuries, accounting for approximately 4% of emergency department visits in the USA every year [1]. Pain is one of the most frequent reasons that patients refer to emergency centers so that 70% of emergency visits is due to pain [2-4]. Most patients presenting to the emergency department with acute fractures are experiencing moderate to severe pain [3]. Pain mismanagement leads to negative consequences such as increased peripheral vascular resistance, increased myocardial oxygen consumption, increased production of CO2, hypercoagulable state, reduction of bowel movements, immune disorders and chronic pain syndrome [4, 5]. Various drugs used for the treatment of pain including the NSAIDs, opium and dopaminergic agents [6]. Opium is one of the effective drugs for pain management that are commonly used for pain management in the emergency departments [5]. Ketamine is an antagonist N-Methyl-Daspratate (NMDA) and is formed as muscular, intravenous, intranasal, rectal. Low-dose ketamine relieves pain within a few minutes and length of effect up to 2 hours. At high doses drug causes hallucination, disturbed sleep, increased intracranial pressure, high blood pressure, tachycardia, and tonic-clonic seizure [7]. Several studies have shown that ketamine is effective agent in the treatment of pain [8] and morphine is the most commonly used analgesic in emergency centers [5,9-16]. Intravenous ketamine is an available agent associated with minimal complications and side effects while the morphine is less available and associated with several side effects such as tolerance [10-13]. The aim of the current study was to compare the efficacy and safety of intravenous morphine and low dose ketamine for pain control of patients with traumatic long bone fractures referring to our emergency room.

Study population
This randomized, double-blinded, clinical trial was conducted in the adult emergency department (ED) of Emam Khomeini hospital, a tertiary general hospital affiliated with Mazandaran University of Medical Sciences, in Northern Iran, during a 6-month period from September 2016 to February 2016. The study protocol was approved by the institutional review board (IRB) and the medical ethics committee of the Mazandaran University of Medical Sciences and all the patients provided their informed written consents before inclusion in the study (IR.MAZUMS.REC.95-1954). The study protocol is also registered by the Iranian registry for clinical trials (IRCT2017041221480N6; www.irct.ir).  We included all the patients between 18 to 65 years with the upper or lower extremity long bone fractures caused by blunt trauma referring to our emergency room. Patients with pain score 7 and higher (moderate to severe pain) were enrolled in this study. Patients with a history of mental or neurological disorders, liver, kidney, stroke, asthma and other respiratory diseases, heart diseases, weight below 45 or above 155 kg, pregnant or lactating women, pressure above 180 or less than 90 mmHg, heart rate less than 50 or more than 150 minutes, respiratory rate below 10 or above 30 minutes, decreased level of consciousness, blow to the head or eyes, multiple trauma, sensitivity to analgesics used in research, drug addiction, intravenous drug use, apart from fractures of long bones, fractures, dislocations and fractures with severe displacement, along with the need to reduction, open fracture, compartment syndrome, reluctance of patients to participate in the project, receiving analgesic before participating in the study were all excluded from the study.

Randomization and Intervention
All the included patients were randomly assigned into to study groups using a computer based random digit generator utilizing the admission numbers which were provided consecutively based on the order of the referral. The patients were assigned to receive 0.1 mg/kg intravenous morphine (Roxanol Solution, Rotexmedica, Trittau, Germany) or 0.5 mg/kg intravenous ketamine (Ketamine hydrochloride 50mg/ml vials, Rotexmedica, Trittau, Germany) on admission. The ratio of randomization was 1:1.

Study protocol
An instrument for assessing the degree of pain with pain Numeric Rating Scale by the researcher (assistant) was measured from zero to 10 is the worst pain I've ever experienced was graded. Research assistant examined patients with blunt and direct trauma to the limbs. The affected limb was immobilized with sling and orthopedic residents were asked to approve the radiographies Pain score at 30, 60, 90, 120, 180 and 240 minutes were measured and recorded. Achieving pain score of 3 or 50% below the initial score was the goal. In the absence of pain relief at any time of the study, half of the previous doses of the same group was administered. If the pain score remains 9 or 10, or more than 2 times to the administered drug, rescue analgesic (fentanyl intravenously at a dose of 1 µg/kg) was given. Side effects of each drug was also recorded and compared between two study groups. All those administrating the drugs and those recording the outcomes were blinded toward the study groups. The patients were also blinded toward their study groups. Only statisticians were aware of the study groups. The drugs were all provided in dark syringes being produced in pharmacology school.

Statistical analysis
In order to have 80% power to detect a 5% difference between two study groups regarding the pain scores, with α equal to 0.01, a total number of 70 patients in each study group was required. To compensate for non-evaluable patients, we included 78 patients in each study group.  All the statistical analysis was performed using the satatostical package for social sciences (SPSS Inc., Chicago, Illinois, USA) version 18. Data are presented as mean ± SD and proportions as appropriate. The proportions were compared using chi-square test between the study groups. The parametric variables with normal distribution were compared using independent t-test. Repeated measures was used to compared the changes in pain scores within groups. A two-sided p-value of less than 0.05 was considered statistically significant.

Overall we screened 186 patients for eligibility of whom 30 were not found eligible for the study and thus 159 patients were randomized to the two study groups. All the 78 patients in ketamine group received the intervention while one of the patients in morphine group did not receive the intervention due to emergency transfer to the operating room. In ketamine group 1 patients discontinues the intervention due to severe nausea and vomiting while one in morphine group was lost to follow-up because of being transferred to the operating room. Thus the total number of patients included in the final analysis was 156 (78 patients in each study groups). The flow diagram of the study is demonstrated in Figure 1.
The baseline characteristics of the patients is demonstrated in Table 1. As demonstrated both study groups were comparable regarding the baseline characteristics. The pain intensity significantly decreased in both study groups after 240 minutes of intervention (Figure 2). However, we found that there was no significant difference between the two study groups regarding the pain intensity after 30 (p=0.378), 60 (p=0.927), 90 (p=0.434), 120 (p=0.557), 180 (p=0.991) and 240 (p=0.829) minutes (Table 2). However, low dose ketamine was associated with higher need for rescue analgesic as compared to intravenous morphine (p=0.036). The side effects of the two agents were comparable (Table 2). 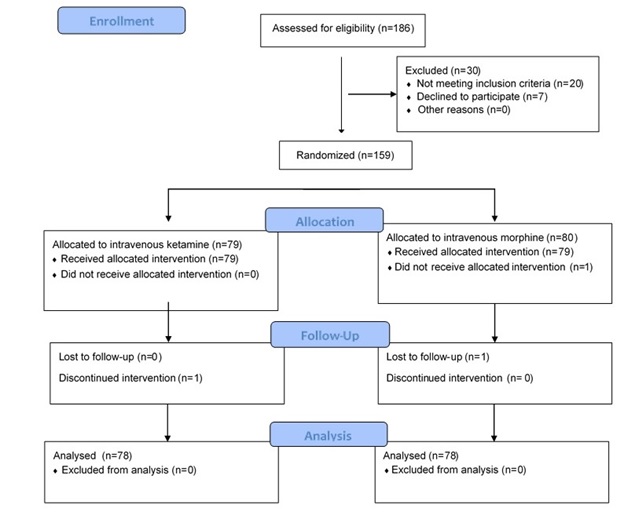 Table 1. The baseline characteristics of the 156 patients with traumatic long bone fractures presenting to our emergency room assigned to two study groups. 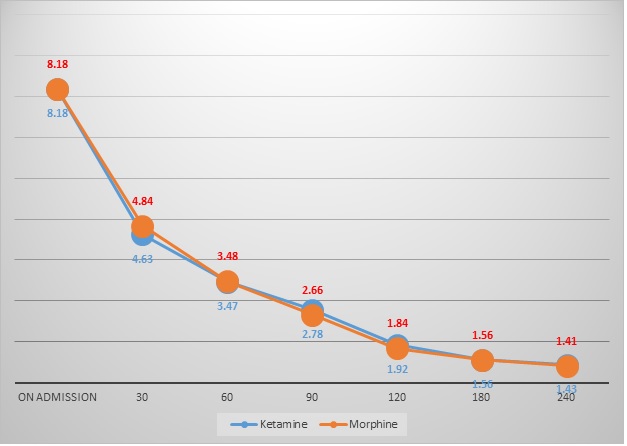 Table 2. The pain intensity in time period after administration of morphine or ketamine in 156 patients with long bone fractures.

The results of the current study demonstrated that both intravenous low dose ketamine and morphine are associated with significant reduction in pain intensity after 4 hours. However, the pain scores were comparable between the two study groups while ketamine was associated with higher need for rescue analgesic. The side effects were also comparable between the two study groups. The results of this study indicate that the both the intravenous ketamine and morphine are effective agents for control of pain in patients with traumatic long bone fractures. As ketamine is more available and inexpensive, it could be recommended for use in the emergency room for pain management of patients with long bone fractures.
Several studies have addressed the pain management strategies in patients with long bone fractures in emergency rooms [17-19]. Beaudoin et al., [17] conducted a double-blind, randomized, placebo-controlled trial with three study arms. In their study patients were 18 to 65 years old with acute moderate to severe pain (score of at least 5 out of 10 on the numerical pain rating scale [NRS] and pain duration < 7 days) who were deemed by their treating physician to require IV opioids. The three research arms included: 1) morphine and normal saline 2) morphine and 0.15 mg/kg ketamine 3) morphine and 0.3 mg/kg ketamine. They evaluated the cases at 30, 60, and 120 minutes. Like our study, there were no differences between age, sex, race/ethnicity, preenrollment analgesia. They concluded that Low-dose ketamine is a viable analgesic adjunct to morphine for the treatment of moderate to severe acute pain. Our study also showed the same results. But Miller et al., [18] revealed that low-dose ketamine did not produce a greater reduction in pain scores compared with morphine for acute pain in the emergency department. In this regards, Eftekharian et al., [19] indicated the reverse outcomes. Like our current study, they evaluated the analgesic efficacy and safety of sub-dissociative intravenous-dose ketamine with morphine in emergency department patients. They showed that primary change in mean pain scores was not significantly different in the ketamine and morphine. There was no difference in the incidence of rescue fentanyl analgesia at 30 or 60 minutes. Their results confirmed our study and they showed that sub-dissociative intravenous ketamine provides analgesic effectiveness and apparent safety comparable to that of intravenous morphine for short-term treatment of acute pain [19]. Some recent studies [20, 21] showed that ketamine infusion can be a valid alternative strategy for managing pain associated with rib fractures.
We note some limitations to our study. First, the number of patients included in the current study was limited. However, our study had an 80% power to detect the differences between the two study groups. We recommend further multicenter clinical trials to shed light on the issue. The other limitation was that we only recorded the pain intensity based on the one scale. Some believe that other indices should be used to measure the pain intensity. However, the VAS is an internationally accepted measure of the pain intensity.
In conclusion, the results of the current study demonstrate that intravenous administration of low dose ketamine is an effective and safe method of pain control in patients with traumatic long bone fractures in emergency room. Further studies are required to shed light on the issue.

The authors would also like to thank the nursing staff of the Emergency Department of Emam Khomeini Hospital for their vigilance and help in patient enrollment. We would also like to acknowledge the editorial assistant of Diba Negar Research Institute for improving the English and style of the manuscript.

Conflict of interest: None declared.