Because of increased recognition of the issues after radial head excision, the consensus is shifting towards preservation of radial head if technically feasible [1]. Although previous guidelines suggested that Mason type II fractures with the fracture fragment involving more than 25% of radial head were best treated by reduction and fixation [2], indications for fixation have evolved [3] and opinions differ as to the best method of fixation [3]. Management of Mason type III fractures is equally controversial, with management options including conservative management, simple excision [4], prosthetic implant replacement [5,6], and open reduction and internal fixation [2]. Resection of radial head fracture is a very attractive option because of it ease, shorter duration of surgery, and absence of any implant related complications. But more and more surgeons are now opting for osteosynthesis, especially for Mason type III fractures, due to the availability of newer implants and understanding of biomechanics. Due to the complexity and comminution of some Mason type III injuries, we hypothesized that difficult Mason III injuries might be better managed with resection rather than reconstruction.
In this prospective study, the functional outcome of the surgical resection and reconstruction of Mason II and Mason III radial head fractures was compared using Broberg and Morrey Scoring system [7]. The aim of this study was to identify the best treatment method among two commonly used modalities of treatment: radial head resection and radial head reconstruction (osteosynthesis).

Study population
This was a prospective cohort study being conducted in the Department of Orthopedic Surgery of SMS Medical College and attached Hospitals during October 2010 to January 2013. A total of 31 patients with Mason Type II and III radial head fractures, who
fullfilled inclusion criteria were included. A total of 16 patients had undergone radial head resection and 15 underwent radial head reconstruction. Inclusion criteria were age between 18 to 60 years, Mason type II and III fractures, acute injury (presented within 48 hours of injury), patient consenting for inclusion in study. One patient in each group was lost during follow-up, hence final results were calculated for 15 patients in resection group and 14 patients in reconstruction group. Informed consent was obtained from all individual participants included in the study. Patients having associated ipsilateral upper limb fracture, polytrauma patients and soft tissue infection at fracture site were excluded from study. The study protocol was approved by the institutional review board (IRB) of the SMS Medical College.

Study protocol
Detailed history and examination was done to identify any associated injuries. Radiographs obtained included true anteroposterior, true lateral and radiocapitellar view (if necessary) in maximum possible supination and pronation for better visualization of fracture pattern. CT-scan with 3D reconstruction was reserved for cases where it was difficult to visualize fracture fragments in radiographs. The minimum follow-up was one year.

Surgical Technique
The patients were given regional anesthesia with supraclavicular block unless contraindicated, in such cases general anesthesia was used. Supine position was used with ipsilateral upper limb draped free. The shoulder was abducted, elbow extended, and the forearm pronated on the hand table.Pneumatic tourniquet at adequate pressure was used. Using standard Kocher approach, skin incision was placed beginning at the lateral humeral epicondyle extending obliquely across the radial head, ending at the posterior border of the ulna. Fascia between the anconeus muscle and the extensor carpi ulnaris muscle was split and identified followed by developing the interval the two muscles to reach to the underlying capsule of the radiohumeral joint. To aid exposure, part of the superior anconeus was detached from the lateral epicondyle of the humerus in some cases. Forearm was pronated to roll the radial nerve and its posterior interosseous branch to a more anterior position. Posterolateral aspect of the capsule was incised and all necessary precautions were taken care to protect posterior interosseous nerve.
In resection group, for resection of comminuted fragments of the radial head, all fragments were removed and thorough irrigation of the elbow joint was done. Using a high-speed burr, stump of the proximal radius was smoothened off. Purse-string closure of capsular remnants and annular ligament around the stump of the proximal radius was done to increase stability.
In reconstruction group, in Mason type II fractures, fragments having good soft-tissue attachments were maintained. Reduction of the fracture and internal fixation with a Kirschner-wire (K-wire) or screw using lag technique was done. Two screws were used if the size of the fragment was large and screw heads were countersunk beneath the articular surface. In Mason III comminuted fractures, free fragments were retrieved out of the wound and assembled externally on table to form one fragment. If a portion of the radial head was attached to the shaft, the assembled fragment was fixed to it with screw. If the entire head was comminuted and no part of head was attached to the shaft, the entire head was reconstructed externally on table and the fixed with wires/screws to radius shaft. Construct was examined before closure to determine its stability and the safe range of motion. Thorough irrigation was done and wound was closed in layers.

Statistical Analysis
The data were analyzed using Microsoft Excel, statistical package for social sciences (SPSS Inc., Chicago, Illinois, USA) version 20 (IBM). Descriptive statistics (mean, standard deviation and proportions) were used to summarize the study variables. The 95% confidence intervals (CI) for difference of mean were used. Chi-square test was used to observe an association between the qualitative study and outcome variables. Unpaired t-test was used for analysis of quantitative data. A two-sided p-value of less than 0.05 was considered statistically significant.

Table 1. The baseline characteristics and outcome measures of 29 patients with Mason II-III radial head fractures undergoing resection (A) or reconstruction (B).

Table 2. The functional outcomes of 15 patients with Mason II radial head fractures undergoing resection (A) or reconstruction (B).

Table 3. The functional outcomes of 14 patients with Mason III radial head fractures undergoing resection (A) or reconstruction (B).

In resection group, 3 patients had complication in the form of posterior interosseous nerve paresis, infection (superficial infection in 2 cases) and 1 patient in reconstruction group in the form of superficial infection. The patient having posterior interosseous nerve palsy resulted due to handling during surgery and excising radial head more distally due to close relation of posterior interosseous nerve with radial neck. It recovered in three weeks’ time. Passive finger movements were promoted to prevent stiffness. All infections were superficial which subsided after regular dressing and a course of culture specific antibiotics. No incision and drainage was required. The causative organism was gram positive Staphylococcus aureus in all cases. Infection resolved within a week in both patients.

Fractures of the radial head are among the most common elbow fractures in adults [8] and accounts for 15% to 45% of injuries around elbow joint [9,10].  Since 1954, when Mason [11] first provided classification of radial head fractures, the management is still controversial. In earlier times due to lack of fixation techniques, resection was considered as gold standard for type II and type III fractures of the radial head. Mason suggested that ‘If in doubt, resect’ [11].  In 1962, Johnston mentioned radial head as an important lateral column stabilizer and was in favor of preserving radial head if feasible [8]. With current advances and better understanding of elbow biomechanics and with the advent of new implants, osteosynthesis is emerging as the technique of choice [2]. Our results with Mason type II showed that reconstruction has better results than resection. This is also supported by results of Bunker and Newman [12], and Pearce and Gallannaugh [13].  In the case of Mason type III fractures, resection of the radial head has been the traditional treatment. However, recent studies recommend that osteosynthesis should be attempted [14-16]. It also advised against performing an immediate resection of the radial head since this could cause a proximal migration of the radius, elbow instability. Our study showed that although strength and stability were good after reconstruction of Mason III fractures, the elbow range of movement was decreased. This lead to more disability when compared with patients with radial head resection. We favor resection over reconstruction in severely comminuted radial head fractures where anatomical fixation cannot be achieved. This is in accordance with multiple studies which concluded that resection of radial head provided satisfactory pain relief and functional range of motion [17-23]. In our study 80% patients returned to their previous occupation regardless of procedure done. Average immobilization period was comparatively longer than 8 days (in resection) and 2 days (in reconstruction) in study by Ikeda et al.,[24]. Period of immobilization in reconstruction group depended on the implant used, the strength of fixation, the fracture pattern and the degree of comminution. Extension lag seen was comparable in resection group but higher in reconstruction group when compared with average 15.5 degrees (resection group) and 7.1 degrees (reconstruction group) in study done by Masayoshi Ikeda et al.,[24]. Full range of flexion arc was achieved in our study in patients who were cooperative and willing for aggressive rehabilitation. The average score was better in resection group but poor in reconstruction group in Mason III fractures when compared with 81.4 (resection group) and 90.7 (reconstruction group) in study by Ikeda et al.,[24]. Comparative poor result in reconstruction group is attributed to longer immobilization period and difficulty in achieving anatomical fixation in Mason type III fractures which were similar to results achieved by Radin and Riseborough [25] and Ring et al.,[26]. Figures 1A, 1B show pre-operative radiograph and CT scan of a case managed with resection. Figure 1C shows pre-operative radiograph of a case managed with reconstruction. Figure 2A and 2B show post-operative radiographs of the cases. Figures 3A and 3B show clinical picture (intra-operative) and one year follow-up radiograph of a case managed with reconstruction. 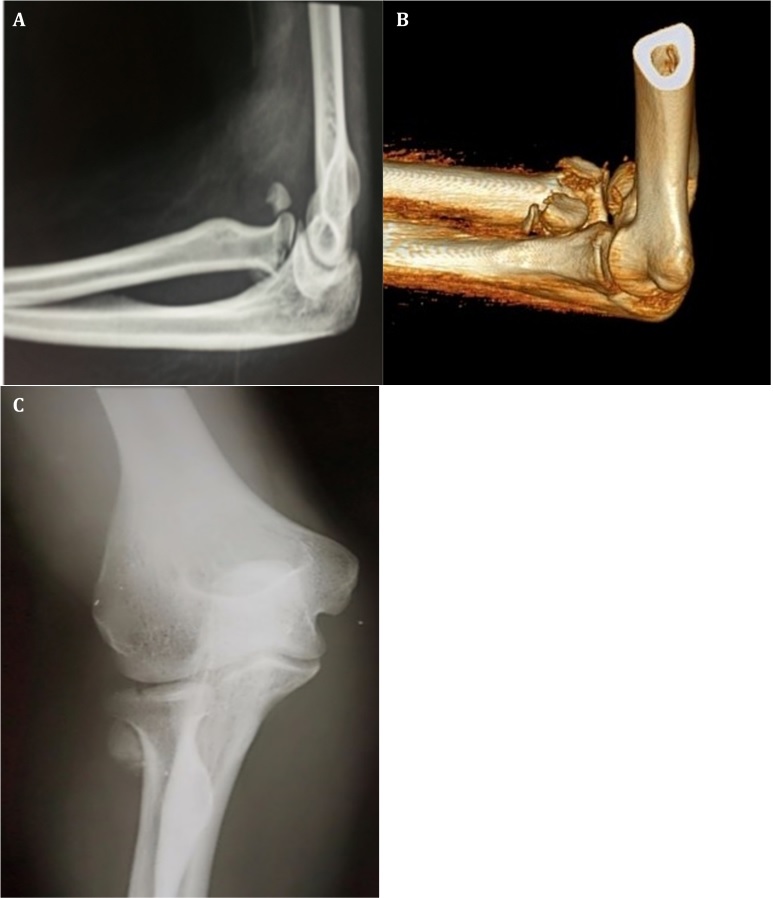 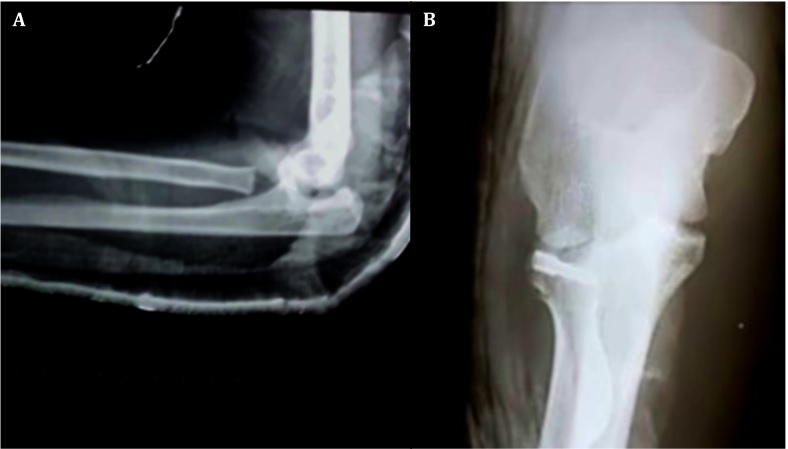 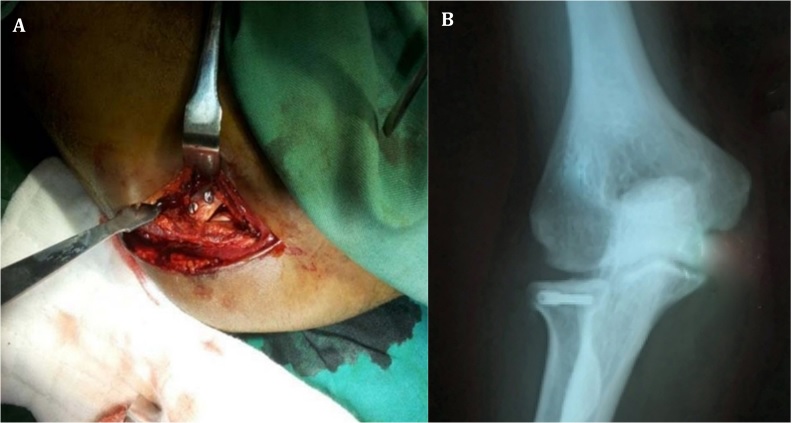 We note some limitation to our study. Minimum follow-up in our study was 12 months (range 12-18 months), thus long term complications like elbow arthritis, tardy ulnar nerve palsy, proximal migration were difficult to comment on in our study. Relatively longer immobilization was done in patients of reconstruction group in Mason III to promote fracture healing which might have led to relatively low functional score. Reconstruction of radial head was done using various implants which was decided intraoperatively by chief surgeon depending on pattern of fracture which may have caused bias. Mini plate could not be used because of its poor availability which we think could have aided in early rehabilitation in Mason III and therefore better results. Also, the sample size in our study was low and a power analysis was not done.

In conclusion, the procedure suggested in Mason type II is reconstruction of radial head. In Mason type III due to difficulty in achieving anatomical reduction results were not good with reconstruction when compared with resection. We recommend radial head excision in Mason type III fractures where anatomical and stable fixation is not possible. The main aim of treatment in radial head fracture should be to choose a surgical procedure which will provide earlier rehabilitation, pain-free full range of motion at elbow along with good strength and stability. Long term studies with more subjects may be required to reach to a definitive conclusion.

All procedures performed in studies involving human participants were in accordance with the ethical standards of the institutional and/or national research committee and with the 1964 Helsinki declaration and its later amendments or comparable ethical standards.