Objective: To determine the effects of methylprednisolone-laden hydrogel loaded into a chitosan conduit on the functional recovery of peripheral nerve using a rat sciatic nerve regeneration model was assessed.Methods: 10-mm sciatic nerve defect was bridged using a chitosan conduit (CHIT/CGP-Hydrogel) filled with CGP-hydrogel. In authograft group (AUTO) a segment of sciatic nerve was transected and reimplanted reversely. In methylprednisolone treated group (CHIT/MP) the conduit was filled with methylprednisolone-laden CGP-hydrogel. The regenerated fibers were studied within 16 weeks after surgery.Results: The behavioral, functional and electrophysiological studies confirmed faster recovery of the regenerated axons in methylprednisolone treated group compared to CHIT/Hydrogel group (p<0.05). The mean ratios of gastrocnemius muscles weight were measured. There was statistically significant difference between the muscle weight ratios of CHIT/MP and CHIT/Hydrogel groups (p<0.05). Morphometric indices of regenerated fibers showed number and diameter of the myelinated fibers were significantly higher in CHIT/MP than in CHIT/Hydrogel group. Conclusion: Methylprednisolone-laden hydrogel when loaded in a chitosan conduit resulted in improvement of functional recovery and quantitative morphometric indices of sciatic nerve.

The repair of peripheral nerve injuries is still one of the most challenging tasks and concerns in neurosurgery. Nerve autograft remains the gold standard, however, there are several drawbacks such as sacrifice of functioning nerves, loss of sensation and mismatch between nerve and graft [1]. Different graft equivalents have also been applied to bridge the nerve stump and regulated through the interaction of a variety of protein and cell signals [2,3].
Biodegradable nerve guides as a temporary scaffold are better than non-degradable biomaterials because the latter remain in situ as a foreign body and ultimately result in limiting recovery of nerve function [4]. Nevertheless, the resistance to biodegradation can be a cause of chronic nerve compression in the long run and a second surgery may therefore be required for its removal.
Beneficial effects of chitosan as a conduit in promoting nerve regeneration have already been documented and it seems chitosan as a natural polymer has excellent properties including biocompatibility, biodegradability, non-toxicity and adsorption properties, and might be a suitable functional material for peripheral nerve regeneration [5,6]. The effects of glucocorticoids are mainly anti-inflammatory and anti-edema following injury [7]. Glucocorticoids enhance the rate of myelin formation by binding to glucocorticoid receptors that are expressed on Schwann cells [8]. Glucocorticoids also reduce injury-associated tissue and improve nerve recovery [9,10]. Recently, Yao and Kiyama have demonstrated that glucocorticoids can up-regulate the expression of growth associated protein after peripheral nerve injury which is associated with axon regeneration and function reconstruction [11,12]. Systemic glucocorticoid administration is used to treat facial nerve injury, however, in order to meet an important pharmacological principal high-doses of glucocorticoids are administrated after acute injures of the nerve system. Therefore, systemic toxicities and adverse reactions such as Cushing’s syndrome, infections, ulcer, hypertension, arteriosclerosis and osteoporosis may ensue [13].
To enhance nerve regeneration and avoid or reduce adverse reactions, a chitosan conduit loaded with methylprednisolone-laden hydrogel was designed for the local drug delivery to injured nerves, which help increase local drug concentration while decrease systemic toxicities.
The present study was conducted to evaluate effects of methylprednisolone-laden hydrogel loaded chitosan conduit as an in situ delivery system of methylprednisolone in bridging the defects in rat sciatic nerve transection model.

Preparation of chitosan conduit
Chitosan solution was prepared by dissolving medium molecular weight, crab shell chitosan (~400kDa, 85% deacetylated) (Fluka, Sigma-Aldrich St. Louis, MO, USA) in an aqueous solution (1% v/v) of glacial acetic acid (Merck, Darmstadt, Germany) to a concentration of 2% (w/v) while stirring on a magnetic stirrer-hot plate. The solution was stirred with low heat (at 50ºC) for 3hour. To overcome the fragility of chitosan, glycerol (Sigma Chemical Co., St. Louis, MO, USA) was added as 30% (w/w) of the total solid weight in solution [14]. Chitosan conduit was made according to the method described by others by gentle injection of the prepared solution into a home-made mold [14]. The prepared conduit was 2 mm in external diameter, 1.8 mm in internal diameter and 10 mm in length. This internal diameter complies with optimal function in rat models.

Grafting procedure
Animals were anesthetized by intraperitoneal administration of ketamine-xylazine (ketamine hydrochloride 5%, 90mg/kg and xylazine hydrochloride 2%, 5mg/kg). The procedures were carried out based on the guidelines of the Ethics Committee of the International Association for the Study of pain [15]. The University Research Council approved all experiments.
Following surgical preparation in the sham-operation group (SHAM) the left sciatic nerve was exposed through a gluteal muscle incision and after careful homeostasis the muscle was sutured with resorbable 4/0 sutures, and the skin with 3/0 nylon. In authograft group (AUTO) a segment of sciatic nerve was transected and reimplanted reversely. In the CHIT/Hydrogel group the left sciatic nerve was exposed through a gluteal muscle incision and transected proximal to the tibio-peroneal bifurcation where a 7 mm segment was excised, leaving a gap about 10 mm due to retraction of nerve ends. Proximal and distal stumps were each inserted 2 mm into a chitosan tube and two 10/0 nylon sutures were placed at each end of the cuff to fix the tube in place and to leave a 10-mm gap between the stumps. The conduit was filled with CGP-Hydrogel and sterile Vaseline was used to seal the ends of the tubes to avoid leakage. In the CHIT/MP group the conduit was filled with methylprednisolone-laden hydrogel. The animals were anesthetized (see above) and euthanized with transcardial perfusion of a fixative containing 2% paraformaldehyde and 1% glutaraldehyde buffer (pH 7.4) 4, 8, 12 and 16 weeks after surgery.

Behavioral Testing
Functional recovery of the nerve was assessed using the Basso, Beattie, and Bresnahan (BBB) locomotor rating scale for rat hind limb motor function [16]. Although BBB is widely used to assess functional recovery in spinal cord injured animals, however, it has been demonstrated that it could be most useful in assessment of never repair processes in peripheral nerve injuries [17]. The testing was performed in a serene environment. The animals were observed and assessed within a course of a 4-minute exposure to an open area of a mental circular enclosure. BBB scores were recorded once before surgery in order to establish a baseline control and again weekly thereafter to assess functional recovery during 16 weeks.

Static sciatic index (SSI)
SSI is a time-saving digitized static footprint analysis described by others [19]. A good correlation between the traditional SFI and the newly developed static sciatic index (SSI) and static toe spread factor (TSF), respectively, has been reported by others [19]. The SSI is a time-saving and easy technique for accurate functional assessment of peripheral nerve regeneration in rats and is calculated using the static factors, not considering the print length factor (PL), according to the equation:
SSI = [(108.44 × TSF) + (31.85 × ITSF)] − 5.49
Where:
TSF = (ETS-NTS)/NTS
ITSF = (EIT-NIT)/NIT

Biomechanical testing
The regenerated nerves were harvested and placed in a normal saline bath at room temperature. The samples were then fixed between frozen fixtures in a mechanical apparatus. The TA.XTPlus Texture Analyzer mechanical test device was used for the assessment (Stable Micro Systems, Surrey GU7 1YL, UK). After 5 minutes, the frozen fixtures were tightened to ensure that no slippage occurred during testing. The initial length was set to 10 mm. Each sample was stretched at a constant rate of 1 mm/min. The load and displacement were sampled 5 times per second. Each sample was stretched to complete tensile failure. Samples were kept wet moist during testing using a drop of normal saline solution to the nerve segments.

Muscle mass
Recovery assessment was also indexed using the weight ratio of the gastrocnemius muscles 16 weeks after surgery. Immediately after sacrificing of animals, gastrocnemius muscles were dissected and harvested carefully from intact and injured sides and weighed while still wet, using an electronic balance. All measurements were made by two independent observers unaware of the analyzed group.

Histological preparation and quantitative morphometric studies
Operated nerve was dissected from surrounding tissues and a segment including several millimeters proximal and distal to the graft was harvested. Graft middle cable of SHAM, TC, CHIT/CGP-Hydrogel and CHIT/MP groups were fixed in 2.5 percent glutaraldehyde. The grafts were postfixed in OsO4 (2%, 2 h), dehydrated through an ethanol series and embedded in Epon. Samples were cut in 5 μm, stained with toluidine blue and examined under light microscopy. Morphometrical analysis was carried out using an image analyzing software (Image-Pro Express, version 6.0.0.319, Media Cybernetics, Silver Springs, MD, USA). Equal opportunity, systematic random sampling and two-dimensional dissector rules were followed in order to cope with sampling-related, fiber-location-related and fiber-size related biases [20].

BBB recovery
In order to assess hind limb recovery, the open field locomotor was used. Figure 1 shows BBB scores compared to the baseline. All experimental groups, except for SHAM, showed the greatest degree of functional deficit one week after surgery. The methylprednisolone treated group showed significant improvement in locomotion of the operated limb compared to the CHIT/CGP-Hydrogel group during the study period (p< 0.05). 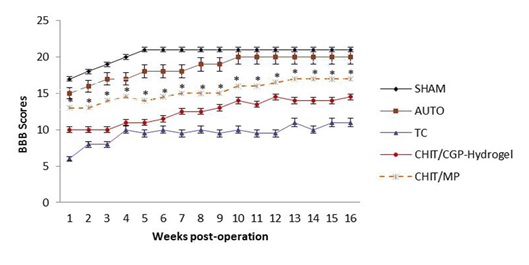 Fig. 1. BBB score for all experimental groups. Local administration of methylprednisolone with chitosan grafting gave better scores than in CHIT/CGP-Hydrogel group. Standard error at each data point is shown with bars. 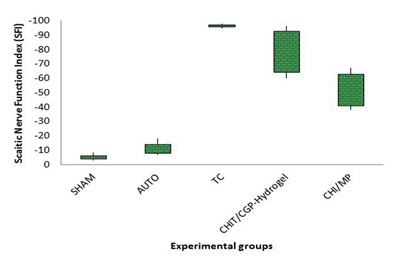 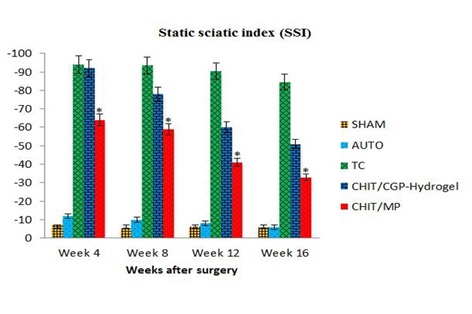 Table 1. Biomechanical analyses of sciatic nerve in each of the experimental groups: Values are given as mean ± SD.

aThe mean difference is significant at the .05 level vs. CHIT/CGP-Hydrogel group.

Muscle mass measurement
Gastrocnemius muscles weight of injured and uninjured sides were measured in each group. There was statistically significant difference between percentage of the mean muscle weight ratios of CHIT/MP and CHIT/CGP-Hydrogel groups (p<0.05). The results showed that in CHIT/MP group muscle weight ratio was bigger than in CHIT/CGP-Hydrogel group and weight loss of the gastrocnemius muscle was ameliorated by local administration of methylprednisolone (Figure 4). 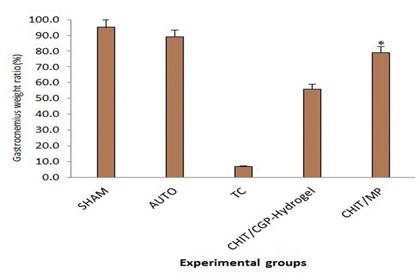 Fig. 4.  Gastrocnemius muscle weight measurement. The gastrocnemius muscles of both sides (operated left and unoperated right) were excised and weighed in the experimental groups at 16 weeks after surgery. Data are presented as mean ± SD. * P < 0.05 vs CHIT/CGP-Hydrogel group.

Table 2. Morphometric analyses of sciatic nerve in each of the experimental groups: Values are given as mean ± SD.

aThe mean difference is significant at the .05 level vs. CHIT/CGP-Hydrogel group.

This study was financially supported by a grant for Young Researchers and Elite Club, Urmia Branch, Islamic Azad University, Urmia, Iran. The authors would like to thank, Solid Tumor Reaserch Center, Urmia University of Medical Sciences for technical expertise.